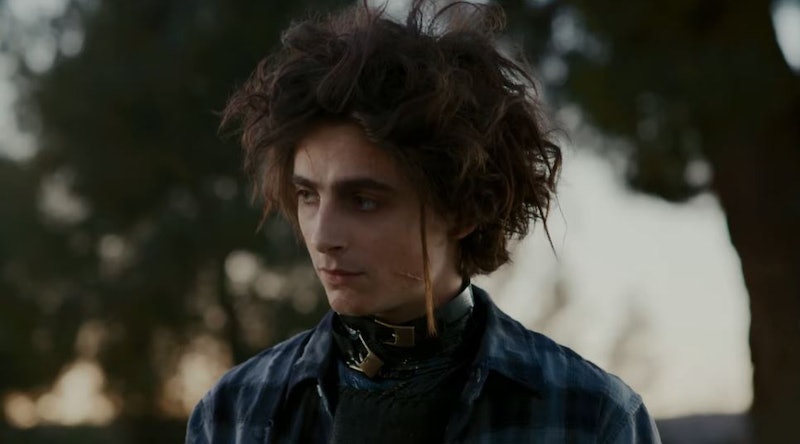 Cadillac is throwing it back this year with its Edward Scissorhands-inspired Super Bowl ad starring Timothée Chalamet and Winona Ryder. The automobile maker showed off the all-electric LYRIQ with an homage to the 1990 cult classic film starring Ryder alongside Johnny Depp. In the commercial, Chalamet plays Edgar, the son of Edward and Ryder’s character, Kim, and the story is heartwarming.

“This is the story of a boy with scissors for hands. No, not that one,” Ryder says to start it off. The ad then shows a day in the life of Edgar, which unfortunately includes a lot of struggles. Although he’s good at helping him mom slice pineapple, he has mishaps on the bus, in the classroom, catching footballs, and at work. On top of that, he wants to drive but can’t.

This being a car commercial and all, there’s a solution: the Cadillac LYRIQ. But it’s the tender, nostalgic journey to getting there that’s the point. Credit that to the combination of Edward Scissorhands, Ryder, and Chalamet. It was, as the Call Me by Your Name actor described it to Vogue, “a total dream come true” to work with Ryder, especially as he’s a fan of the original film.

“Legacy and precedent are some of the most important factors for me in choosing projects,” he told the magazine. “Edward Scissorhands was a movie I adored growing up and the opportunity to step into that world was a dream come true.”

The goal was to “create a character that didn’t make you blink in terms of a present-day setting, but was a total homage to the character Johnny Depp created.” And, if the reactions on Twitter are anything to go by, they nailed it. Tweets about the ad show it’s already a favorite from the 2021 Super Bowl, and the throwback was welcome.

It was the heartwarming ad fans needed.

But, of course, there were still a few questions:

If Tim Burton ever decides to direct an Edward Scissorhands sequel, it looks like people will be on board.

More like this
12 Years Ago, Austin Butler Manifested His Oscar Nom In This Disney Movie Scene
By Jake Viswanath
Sandra Bullock’s Razzies Speech Proves She’s The Ultimate Miss Congeniality
By Sam Ramsden
Jennifer Coolidge Recites “Jenny From The Block” Beside J.Lo In Her First TikTok
By Jake Viswanath
The Jonas Brothers' New Album Has A Very Meta Name
By Alyssa Lapid
Get Even More From Bustle — Sign Up For The Newsletter
From hair trends to relationship advice, our daily newsletter has everything you need to sound like a person who’s on TikTok, even if you aren’t.