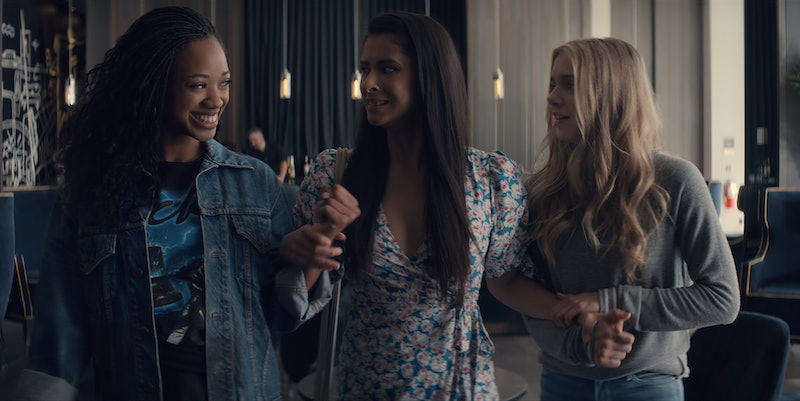 Although it's equally dramatic and backstabby, the Tiny Pretty Things book is very different from the Netflix series. While there are plenty of juicy subplots, the series' two main focuses are 1. Discovering who pushed prima ballerina Cassie Shore from the Archer School of Ballet's rooftop, leaving her in a coma (from which she eventually recovers) and 2. The arrival of Cassie's replacement and the school's only Black ballerina, Neveah (named Gigi in the books). The book, on the other hand, focuses less on Cassie and more on Gigi, and what the other girls — namely her "friends" Bette and June — are willing to do to steal her spot in the company.

In the book, written by Dhonielle Clayton and Sona Charaipotra, Cassie isn't even pushed from the rooftop. Instead, she suffers a much milder but still year-ending injury when her dance partner Will drops her during a routine and fractures her hip. She's forced to leave school to recover, and the book later reveals that Bette blackmailed Will into the drop as part of one of her conniving schemes to make her way to prima. Once Cassie's gone, Bette zeroes in on Gigi (again, that's Neveah in the series), and things get dark.

As the book goes on, Bette and her fellow dancers pull numerous stunts to sabotage Gigi's ascension — we're talking lipstick-written threats on mirrors, cockroach-filled cookies, and glass hidden in her ballet slipper that leaves her foot bloodied — all of which come to a boiling point with a final, nearly fatal deceit: Gigi is pushed in front of a moving taxi, and no one seems to know who did it.

The book ends in a cliffhanger, never revealing who caused Gigi's near-death experience, but the answers are revealed (and Cassie returns!) in the sequel titled Shiny Broken Pieces.

More like this
Watch The Thrilling Teaser Trailer Of 'Shadow And Bone' Season 2
By Gretchen Smail, Jack Irvin and Sophie McEvoy
Mike Flanagan Teases 'The Midnight Club' In This Exclusive, Creepy Clip
By Grace Wehniainen
Twitter Is Pouring Out Some Zhampagne As ‘Schitt’s Creek’ Leaves Netflix
By Brad Witter
The First Clip From Netflix’s Queen Charlotte ‘Bridgerton’ Prequel
By Bustle Editors
Get Even More From Bustle — Sign Up For The Newsletter