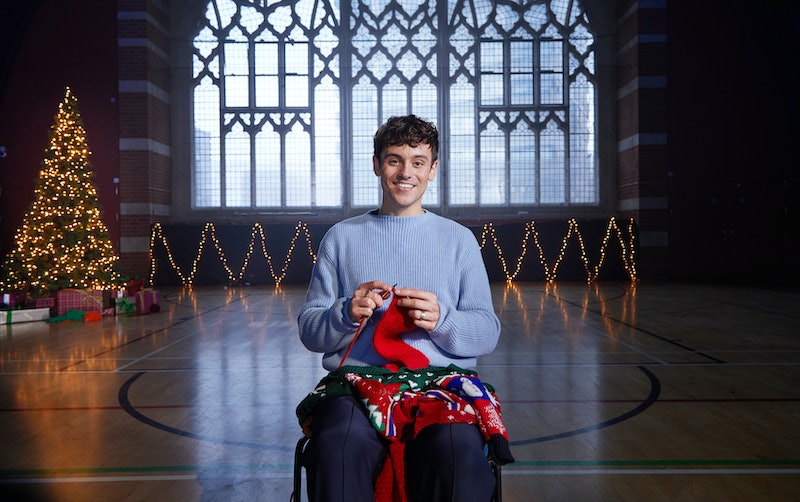 If you could get an alternative Christmas message from someone, who would you pick? Olympic champion Tom Daley is top of my list, and Channel 4 is delivering with a Queen Elizabeth-style Christmas Message. His one wish? A cultural shift in sport. And an out and proud Premier League footballer.

In the festive address, Daley discusses homophobia within the sporting world, especially football. He applauds the athletes that have been courageous enough to open up about their mental health and sexuality — including the first and only topflight male player to come out as gay, Josh Cavallo — and reveals how “incredibly lucky” he is that his own sport supported him as an out and proud gay man.

“If I had one Christmas wish it would be that next year changes. That one impossibly brave Premier League player steps forward and says, ‘I am gay,’” Daley says in the Channel 4 Christmas message.

“That person would inspire gay people everywhere, give hope to thousands of teenagers struggling with their sexuality and save the lives of countless young people who don't currently feel like they have a place in this world,” the Olympian adds.

In the alternative message, Daley goes on to question why the 2022 World Cup is being held in the “ second most dangerous country for queer people, Qatar,” and applauds the trans athletes who openly competed in the Olympics for the very first time in 2021.

“We can make this country the most accepting, the most inclusive, the most progressive country on Earth.” Daley concludes, “What if in Britain anybody could be anything regardless of where they started? What if we all started from the same place? Now wouldn’t that be something to be proud of?”

Speaking of Daley’s Christmas message, Channel 4’s Director of Programmes, Ian Katz, said the broadcaster is “delighted” to provide the Olympic diver a platform “to speak out and raise an issue close to his heart.”

“It is shocking and depressing that that our most popular sporting league remains an environment in which no gay player feels able to openly be themselves and we hope Tom’s message will make a small contribution to changing that,” Katz said in a statement.

First airing in 1993, Channel 4’s Christmas message is intended as an alternative to the Queens annual televised message to the nation, and some of the previous presenters include the President of Iran, Mahmoud Ahmadinejad, Danny Dyer, Katie Piper, Doreen and Neville Lawrence, and even a ‘deepfake’ digitally created The Queen.

More like this
This Pre-'Love Island' Video Of Olivia & Zara Together Changes Everything
By Bustle UK
A New Netflix Doc Will Explore The Unsolved Murder Of Jill Dando
By Sam Ramsden
Twitter Can’t Make Up Its Mind About Ekin-Su’s 'Dancing On Ice' Skate-Off
By Sophie McEvoy
'Love Island’s Kai Fagan Is Very Clear About What He Doesn’t Like
By Sam Ramsden and Darshita Goyal
Get The Very Best Of Bustle/UK
Sign up for Bustle UK's twice-weekly newsletter, featuring the latest must-watch TV, moving personal stories, and expert advice on the hottest viral buys.