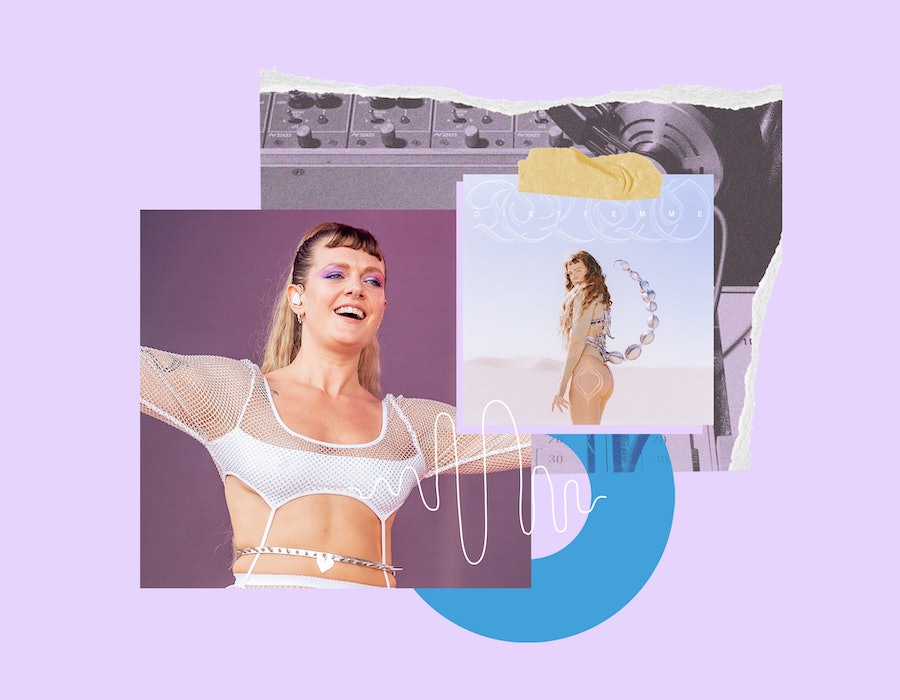 Driving around the foggy hills of Laurel Canyon, you’re liable to see just about anything: a gaggle of free-roaming peacocks, the ghost of Harry Houdini, or if you’re very lucky, Swedish singer-songwriter Tove Lo. Dancing her way through the canyon’s hills became somewhat of a pandemic ritual for the electropop star. “It would be really awkward if someone walked past me,” Tove Lo, born Ebba Tove Elsa Nilsson, tells Bustle on the phone. “It’s just a way for me to find release.”

Finding release has been a theme of Nilsson’s music, starting with her bop-filled 2014 debut album, Queen of Clouds. Sometimes it comes from smearing yourself in glitter and taking a bunch of drugs — as detailed in her breakout single “Habits (Stay High)” — or sometimes from falling into the arms of someone you love. “When you’re on the dance floor, it’s such a perfect time to, like, let it out,” says Nilsson, who started her career as a songwriter for the likes of Ellie Goulding, Hilary Duff, and Charli XCX.

Since Nilsson finds inspiration from parties and togetherness, 2020 was a creative dry spell for her. “I had no writing inspiration or will to write the first year [of the pandemic],” says the musician, who spent lockdown in a state of deep reflection. “Being still for the first time in many, many years and having self-reflection time really made its way into the new record. The songs are even more vulnerable, even more honest.” (The time period wasn’t entirely without movement, though: She also got married, started her own label, Pretty Swede Records, and moved into a house with a group of friends.)

Her new album, Dirt Femme, out Oct. 14, feels especially intimate, but never at the expense of danceability. Nilsson writes about issues with her body and embracing femininity. It’s a perfect album for dancing and crying, a combination that Tove Lo knows better than anyone.

Below, she talks about Dirt Femme, the secret to being a good DJ, and crying in the club.

This record digs deep into this theme of femininity. What has your path to embracing femininity looked like?

When I started out, pretty much after high school in alt-rock bands, I was usually the only girl in the room, and was around a lot of heavy masculine energy. It made me think, “OK, if I’m going to get respect, I’m going to have to play into my masculine traits,” which I naturally have. I think all people have both feminine and masculine traits. We just lean one way more than the other. It doesn’t necessarily have anything to do with gender. I would express [emotions] in my music, but keep them to myself. [The men] would be kind of shitty, like “Girl, you can take the jokes.” All that shit is typical. Maybe this is the aftermath of the #MeToo movement, [in that] we’ve changed our view on that. I’m finally like, “Oh, it affected me too.” It made me start to look at my feminine traits like weaknesses instead of strengths.

That’s really changed [recently]. Now I have a lot more women and feminine characters around me, and I’ve become more at home in my femininity. I don’t try to play down how I'm feeling. [I] show love to people around me, and tell people that I need them and rely on them.

You’ve said you hope that this new record makes people feel like dancing naked in the street, but also crying at the same time. Is dancing and crying how you cope with life?

I’m married to a very open-minded, lovely straight man, but one thing he still struggles with is that I cry. When I’m happy, when I’m sad. I cry when I’m feeling sorry for someone, or I’ve done something wrong. Tears are very available to me. We’ll have the best time at a music festival, watching one of our favorite bands, and it’s so romantic and fun and lovely. And then I’ll start crying. He’s like, “What’s wrong?” And I’m like, “Everything is perfect.” It’s an emotional release.

Has dancing helped you feel more at home in your body?

I used to hate my body as a teenager, and I worked really hard on accepting and loving it. But when I started properly doing dance lessons, they made me feel in touch with myself, having that sort of awareness of my body. I felt pride. They made me feel, like, “I’m a woman.”

Is there a moment you remember when you felt like you’d made it as a musician?

It was when I played South by Southwest. It was my first U.S. show, we’d come from Sweden, and had just gotten our visas. For the first time, I met my die-hard fans, and they had vinyls for me to sign. I was like, is this really happening? Am I going to make it in America? And I remember that feeling, like, wow, this is the dream.

On the flip side, was there a moment you felt ready to give up as a musician?

During the pandemic, I had moments of, “Wait, I’m not performing. What if I’m not going to get to do this again? What if it’s all done now?” But obviously I realized, no, that’s up to you, so keep going. I had one brief moment in my early 20s, before I got my publishing deal as a songwriter. I’d gotten so many no’s. No musicians wanted to play with me, no writers wanted to work with me. So I signed up to be a Pilates instructor, and I started [the training]. While I was doing that, all of a sudden Icona Pop reached out. We went to the same high school, and they were like, “Can you come in and try to write lyrics with us? This person bailed out of our session.” That got me in the room. That’s how it all happened.

I love King Princess. I love what Charli XCX is doing at the moment. I think she’s just smashing it. I’m super in love with this girl called Cy, a Swedish artist. You’ll see why, her voice and her melodies. It is really fantastic. Huge fan of Doja Cat. She’s a genius.

On How To Throw A Party

The first song you put on when someone hands you the cord?

“Freed From Desire” remix by Kevin McKay. It wins people over in two seconds.

And you would know because you're a DJ! You spent a lot of lockdown learning how to DJ, right?

I live in a kind of collective with five people. We all learned how to DJ. Two or three people were DJing already, and taught me and Jesse — she’s this badass fashion event producer. So we had little five-people dance parties at home, just DJing and making dance music.

What’s the secret to being a good DJ?

That the only people who listen to how you’re mixing are other DJs, so it doesn’t really matter. Play stuff you love and understand. And also, it’s pretty easy to read the room. If people are going off to one song that you play, lean into that genre. But in general, don’t stress. Play stuff you love.

More like this
Marcus Mumford, Open Book
By Ilana Kaplan
Elizabeth Debicki On Her Approach To The Most Debated Scene From 'The Crown'
By Grace Wehniainen
Michelle Williams Laughs Often About Motherhood Thanks To 'The Fabelmans'
By Marina Watts
The Indigo Girls Taught Me Queer Relationships Could Be Messy, Too
By Hannah Soyer
Get Even More From Bustle — Sign Up For The Newsletter