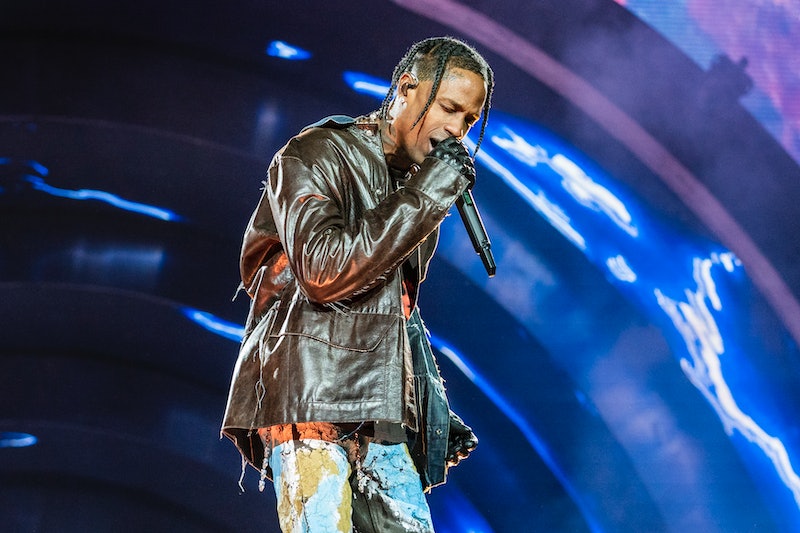 A night of music turned tragic on Friday, Nov. 5. At least eight people were killed in a crowd surge at the Astroworld Festival at Houston, Texas’ NRG Park, with many more injured, CNN reports. The festival’s founder, Travis Scott, who was on stage at the time, issued a statement the following morning, sharing that he is “absolutely devastated by what took place.” He later followed it up with multiple Instagram stories, telling fans how he “could never imagine anything like this just happening.”

“My prayers go out to the families and all those impacted by what happened at Astroworld Festival,” the rapper wrote in his statement.

“Houston PD has my total support as they continue to look into the tragic loss of life.

“I am committed to working together with the Houston community to heal and support the families in need. Thank you to Houston PD, Fire Department and NRG Park for their immediate response and support.”

Scott concluded his message by telling his followers, “Love You All.”

Afterward, he spoke about the tragedy in a series of seven Instagram stories, reiterating that he’s praying for the victims and “working right now to identify the families so we can assist them through this tough time.” Scott also explained how he always wants his fans to have a “positive experience,” so when he “can make out ... anything that’s going on” in the crowd where someone assistance help, he will “just stop the show” to “help them get the help they need” — something he did during Astroworld Festival.

“I could just never imagine the severity of the situation,” Scott added in his stories. “We’ve been working closely with everyone to just try to get to the bottom of this — the city of Houston, HPD, fire department, you know, everyone — to help us, help us figure this out. If you have any information, please just contact the local authorities.”

He also encouraged his followers to “continue to just keep your prayers.” He added, “I mean, I’m honestly just devastated. I could never imagine anything like this just happening. I’m going to do everything to keep you guys updated and just keep you guys informed of what’s going on. Love you all.”

His performance came on the first night of what was supposed to be a two-day event. However, the scene turned chaotic. The surge began around 9 p.m., when Scott took the stage, Houston Fire Chief Samuel Peña said, per The Houston Chronicle. Panic and injuries ensued, and Peña said that Scott stopped performing to ask security to help those in the crowd.

“It happened all at once,” Houston Police Department Executive Assistant Chief Larry Satterwhite said. “It seemed like it happened over the course of just a few minutes.”

Attendees described a horrifying scene. “The crowd was squishing me so much that I felt like I couldn’t breathe,” festivalgoer Emily Munguia told CNN. “I started screaming for help. ... I felt so scared, like I was going to die. … The amount of people I saw get hurt, passed out, bleeding, crying is crazy.”

“Everyone in the front was getting crushed,” Billy Nasser, another attendee, told The Houston Chronicle. “The crowd was moving so hard, people were falling over and then tripping over the people on the ground. … I have been to so many festivals. I have never seen anything like this before.”

Peña described the tragedy as “a mass casualty event,” which is, of course, a far cry from the triumphant return of the festival many had hoped for after it was canceled in 2020 due to the COVID-19 pandemic. Founded in 2018, Astroworld has built a reputation for being “the hottest ticket in town,” as Houston’s KHOU 11 put it in 2019. Tickets sold out within a day when they went on sale in May.

Scott seemed especially excited for the year’s festival. A week before tickets went on sale in May, he plugged it on his Instagram, writing about wanting to “RAGE” after being “LOCKED IN A HOUSE FOR SOMETIME.” Fans were apparently just as excited, with 50,000 present at the time of the tragedy. The second day was canceled, and it remains to be seen what the future of the festival will look like.

This post has been updated with Scott’s latest response to the tragedy.

This article was originally published on November 6, 2021