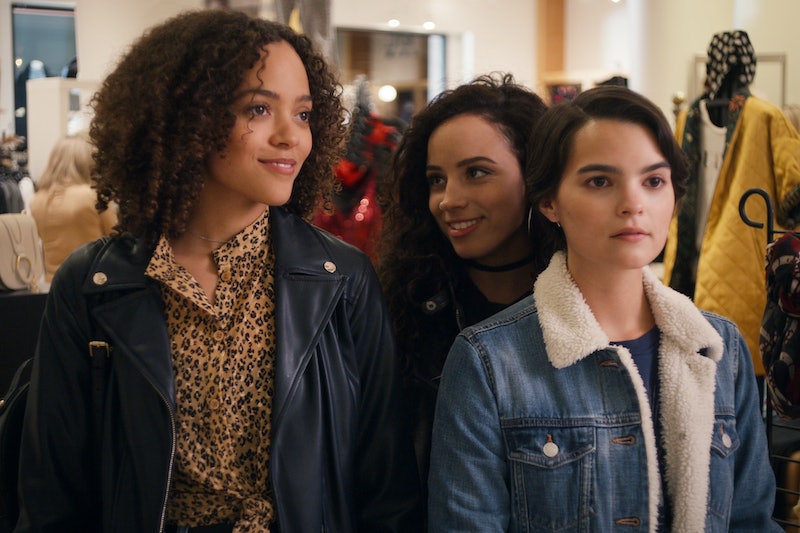 Music has been an integral part of Netflix's Trinkets since the beginning, which makes the Trinkets Season 2 soundtrack almost as important as the story itself. From gleeful backseat singalongs to shows at the Paper Tiger, Elodie (Brianna Hildebrand), Tabitha (Quintessa Swindell), and Moe's (Kiana Madeira) unlikely friendship is defined by the indie music they all love. And considering this is the show's final chapter, showcasing that music was extra important.

Just as in Season 1, Portland native Kat Cunning, who plays Elodie's love interest Sabine, contributed original music to the soundtrack. The singer's new single, "Supernova," for example, sounds like it very well could be about Elodie and Sabine. "I wrote this song while I was falling for a girl who I knew would break my heart," Cunning recently explained to Variety. "She was beautiful to me like a Supernova ... and I knew that my draw to her could only leave me with my face hair singed off." Cunning added that they wrote the track to "celebrate that power of love — how it can make us feel 3x our size and even overpromise things we have no control over."

"All Yours" by Widowspeak

"Dead of Night" by Orville Peck

"Feel Something" by Clairo

"The Embers" by Vagabon

"Uptown Girl" by The Beths

"Go Home" by East of My Youth

"Figure It Out" by Chaos Chaos

"Dig That Sound" by Bloke & Bird

"Dare You Not To Dance" by Haiku Hands

"Serve The Rich" by PINS

"Dive" by The Seshen

"Make It Hurt" by Sydney Franklin

"Knock Me Off My Feet" by SOAK

"It Takes Time" by Chastity Belt

"The Side Stepper" by The Bamboos

"Who You Are" by Mannequin Pussy

"Hard to Kill" by Bleached

"Don't Forget About Me" by Alice Boman

"Someone New" by Caroline Rose

"Too Drunk to Breathe" (feat. Pearl Charles) by Miguel Mendez

"Gems and Rubies" by Valley Queen

"Two Life" by Our Girl

"Your Dog" by Soccer Mommy

"Court of Love" by Durand Jones & The Indications

"All I Want" by Francis

"Time Is A Dark Feeling" by Florist

"yellow is the color of her eyes" by Soccer Mommy