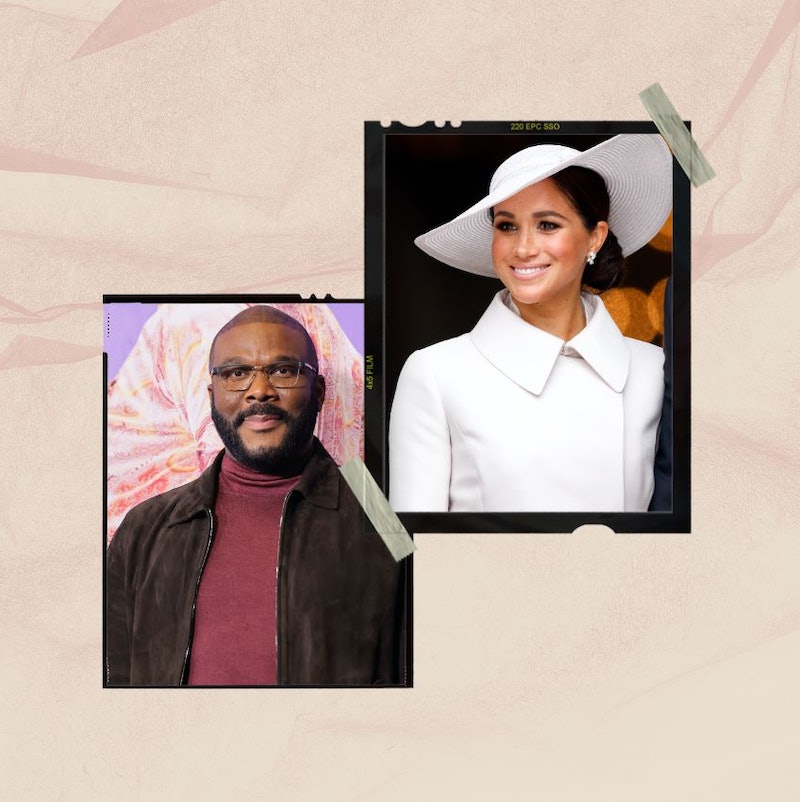 Even if he was a day late, Tyler Perry’s Instagram tribute for Meghan Markle’s 41st birthday was fit for a princess nonetheless. “I’ve had a front row seat in your life for the past few years. I’ve watched you endure things that would have broken a lot of people,” Perry captioned an Aug. 5 photo of the Duchess of Sussex kissing a young girl’s hand during her 2019 South Africa tour. “I’m so incredibly proud to see how happy you, your husband, and your kids are now. It fills me with joy to say Happy Birthday Princess Meghan.”

Though it’s unclear exactly when or how they met, Meghan and Prince Harry’s supportive friendship with the Hollywood mogul made headlines following Oprah Winfrey’s March 2021 interview with the royals. After the couple left England for Vancouver Island, Canada in January 2020, they said they were told “on short notice” that their security detail would be removed amid their so-called royal exit. As that left them without a secure place to live, Perry let Meghan, Harry, and their son, Archie Harrison, stay at his home in Los Angeles. (Their daughter, Lilibet Diana, was born in June 2021, after they’d already moved into their own Montecito, California mansion.)

“We needed a house and he offered his security as well, so it gave us breathing room to try to figure out what we were going to do,” Meghan told Winfrey during their revealing sit-down.

Of course, rumors that the royal couple had been living in Perry’s home had already been widely reported in 2020. Even so, his lips were sealed when CBS This Morning co-host Gayle King brought them up during a July 2020 interview. “I’m sorry, I think I just lost you, Gayle,” Perry — who later appeared on the royals’ first Spotify podcast in December 2020 — joked during the broadcast. “I’m sorry. We have a really bad connection... I think we lost Gayle King, guys.”

Though the trio shares a common friend in Winfrey, King denied rumors that her media mogul BFF set up the temporary living arrangement. “Oprah didn’t hook that up,” she told Entertainment Tonight in May 2020. “Harry and Meghan know people. Tyler knows people. Oprah knows people, but she did not make that connection for Harry and Meghan to live in Tyler’s house.”

Regardless, a source close to the couple told People months later that Meghan and Harry were “really grateful to Tyler Perry for his kindness,” noting that the Madea creator helped them “during a complicated time” in their lives. “With COVID and as they were stepping back from their royal duties, he provided them a safe haven,” the magazine’s insider added.

Like Perry, the royal family also sent Meghan birthday messages on social media on Aug. 4, despite reported tension over the past few years. “Wishing a happy birthday to the Duchess of Sussex,” Kate Middleton and Prince William captioned a photo of their sister-in-law attending this year’s Platinum Jubilee services. Meanwhile, Prince Charles and Camilla, Duchess of Cornwall also shared a similar photo to mark the special occasion.