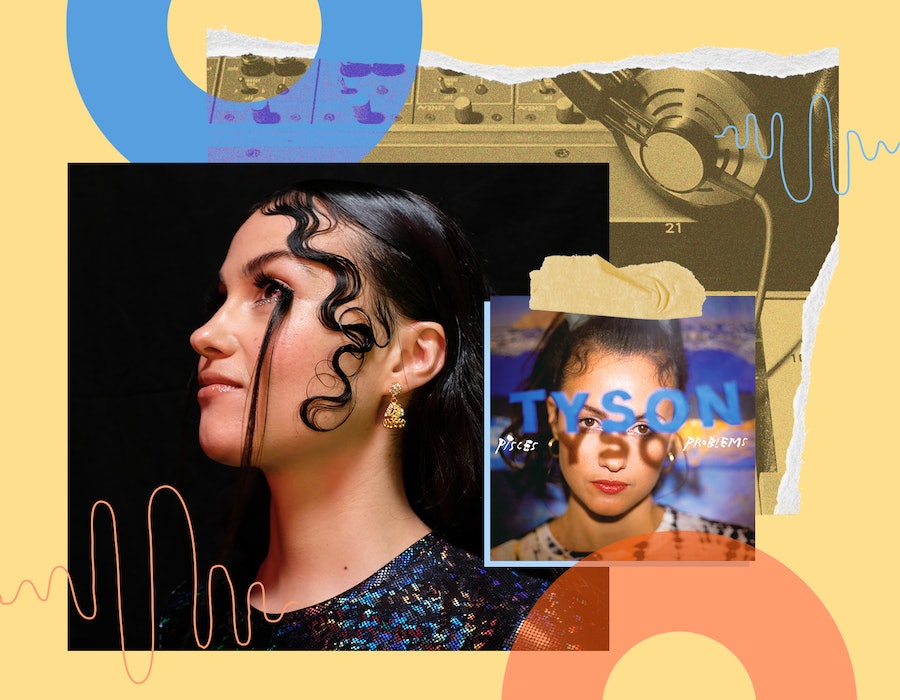 From the looks of it, TYSON is well and truly out of her comfort zone. In the video for singer/songwriter’s new single Tuesday, she’s sat on the back of a massive pink dragon, flying across London in a hazy twilight sky. It’s all very Neverending Story.

“It was so fun,” she laughs to Bustle. Directed by Akinola Davies, at TYSON’s request, they chose not to do the whole “singing-to-a-guy thing.” “I was in a band PANES, we put our EP out in 2014, I wasn’t in any of the videos and I didn’t really like doing pictures,” she tells Bustle, “So for me to get used to doing a performance video, it was nice that it was fun, a little weird and unconventional.”

Although she admits to not always craving the spotlight, TYSON is no stranger to music. Her full name Tyson Mcvey, her mother is the iconic singer Neneh Cherry, Mabel is her sister, her dad is Massive Attack’s Cameron McVey, and her older sister Naima is also a musician.

In fact, back in the late 80s, Neneh Cherry performed heavily pregnant with TYSON on Top Of The Pops, making headlines globally.

“Yep, that’s me,” laughs TYSON, referring to the newborn baby Neneh Cherry is holding in the ManChild video in 1989. “She literally went back on tour when I was three weeks old,” she tells Bustle. “She just got on with it. Now that I’m 32, I can understand it, it’s nuts and my mum is a superhero.”

TYSON has just released her debut EP, Pisces Problems, full of “ethereal melodies” and “woozy R&B” beats, via her company LMP Recordings. It comes after an extensive period of “healing”, getting her masters in anthropological studies and sociology, and simply, figuring herself out.

“Coming from a musical family, I was always a bit unsure music was my thing because everyone does it,” she explains. “However, I had to have an operation on my vocal chords a couple of years ago and I wasn’t able to sing for a few years,” she confesses.

“Losing my voice for that long, made me realise, let’s face it I’m a singer and this is what I want to do.”

On regaining her voice

This Pisces Problems EP is made from the point of me realising that this [singing] is what I want to do and what I’m made to do. It took a long time. The song White, it’s a collection of all the experiences I had when I wasn’t singing and felt a bit lost. It all comes together. It feels really good. Crazy things happen but then you get to make a song about it and it makes sense.

Losing my voice, helped me find direction. The hardest thing from the operation was to not be quiet but not be too loud. I have a really big family and we shout all the time.

On being a typical Pisces

I’m an archetypal Pisces. My Uncle had a book about horoscopes and it painted all the horoscopes in a bad light but Pisces was the worst! Oscar Scheller, who wrote the EP with me, is born on the same day, we’re very similar people, I’ve never met a person who is so much like me.

On growing up in a musical family

A lot of the time it’s made me quite shy because there are so many big characters and so I would just observe — my family is going to read this and say that’s not true, you take up a lot of space! A lot of the time, I was finding my own route into things. The way we grew up wasn’t always easy, but I wouldn’t have it any other way. I really appreciate it now. I’ve gone out with my mum on tour for the last few years and it feels like home.

When I started choosing my own music, it was a lot of R&B. I went through Spice Girls and B*witched phase — forgive me! Growing up I’d do performances to Aretha Franklin — thinking about it now a four-year-old child performing seriously to Aretha Franklin could have been quite painful.

On being inspired by her mum

I’m so inspired. Growing up watching her, I noticed how she balanced family and career. She always worked so hard and she nurtured her family with the same attention to detail the way she nurtured her career. It is so inspiring. And in the last few years, working with her I’ve learned so much. She’s come into a new phase, where she was like “I don’t know if I want to make music anymore” to then, in her fifties be like “fuck it.” That’s really inspiring because there’s this idea that you have to be young. She just gets better and better.

On what she would tell her younger self

Have some patience. It took me so long to know I fully, wholeheartedly know that I want to be a singer. Then I was such a brat like “why isn’t happening?” But it had only been 24 hours. It takes a lot of time, hard work, and effort, so have patience, you’ll get there.

I feel like it’s important to do your own thing. I've always been the unexpected rebel. I always do what I want to do.

More like this
Eurovision Has Been Given A Whole New Look Ahead Of Its Liverpool Debut
By Bustle UK
Here’s How You Can Watch The Grammys 2023 In The UK
By Emma Madden and Catharina Cheung
Twitter Is Saying The Same Thing About Beyoncé's Renaissance World Tour
By Shahed Ezaydi
“I’m Not Here To Make Friends” Speaks To A New Sam Smith Era
By Maxine Harrison
Get The Very Best Of Bustle/UK
Sign up for Bustle UK's twice-weekly newsletter, featuring the latest must-watch TV, moving personal stories, and expert advice on the hottest viral buys.