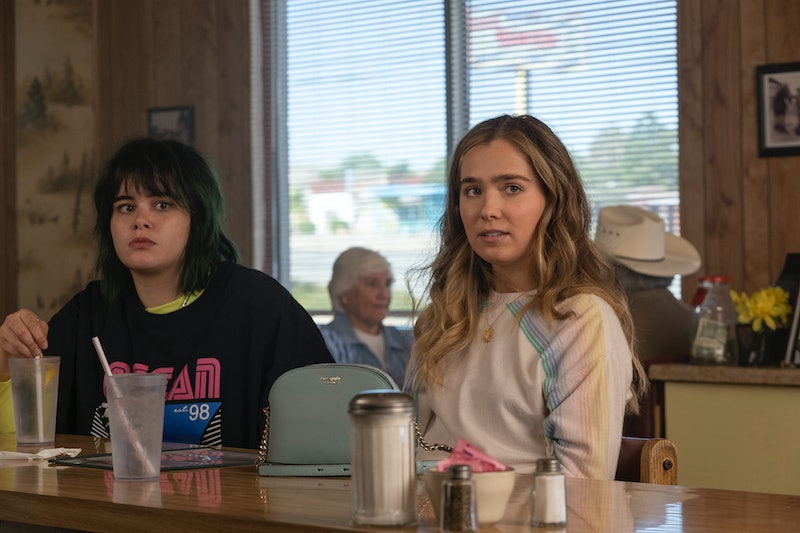 Euphoria fans, listen up, your next quarantine watch has arrived. Unpregnant, starring Barbie Ferreira and Haley Lu Richardson, has finally premiered on HBO Max, and Kat Hernandez fans are going to want to pay attention. Fresh off her scene-stealing role in Euphoria's first season, Ferreira plays Bailey, a free-spirited teenager who reluctantly helps out her former-BFF, Veronica (Richardson) drive out of state to get an abortion. And, based on this new exclusive clip, Unpregnant will put Ferreira's signature IDGAF attitude on full display.

Bailey and Kat are very, very different, but as seen in the clip, they seem to share a desire to break convention. When Veronica shows up on Bailey's doorstep for help, she acquiesces that she's probably the last person Bailey would want to help. Common social convention might tell Bailey to deny it, but she agrees, moving right along. It's a kind of small rebellion that tells you everything you need to know about her character: she wants to break the rules, and she's not worried about hurting other people's feelings while doing it. "I relate to outsiders and tend to think that they're the coolest characters, so I definitely have a bias," the actor told Teen Vogue. "If I'm doing a teen movie or teen show, I like to play characters that remind me of when I was a teenager because I can see were they're coming from."

Teasing her new role in an interview with Esquire, Ferreira described Bailey as someone who is "different from everyone else, and she likes to be." She's a contrarian — and the only person Veronica knows with a car who could help her get to New Mexico for an abortion.

Bailey's story might be a far cry from writing Harry Styles fanfiction to explore her sexuality, as Kat does in Euphoria, but, as Ferreira pointed out, there's a little similarity in all teenagers. "Every teenager is in over their heads with all these high stakes scenarios," she said. "The journey is not supposed to be perfect; if it was, it would be boring."