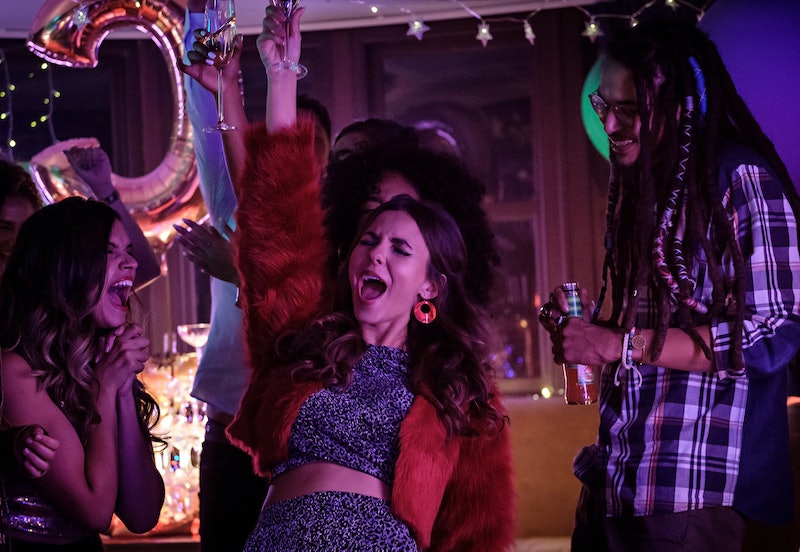 Victoria Justice was always the life of the party as Tori Vega, the aspiring pop star at the center of TeenNick’s 2010s sitcom Victorious. Now, she’s letting loose once again in Afterlife of the Party, Netflix’s highly anticipated new film. Bustle is pleased to reveal an exclusive first look at the movie, which stars Justice as Cassie — a party planner who celebrates her 25th birthday with an epic, multi-day bash dubbed “Cassie-palooza” (think Trina Vega’s birth-week on Victorious). But things take a turn when she dies in a freak accident right before her big day — and just after a friendship-ending fight with her longtime BFF, Lisa (Midori Francis).

Instead of going straight to “the above” or “the below,” Cassie gets stuck in the “in-between” with guardian angel Val (Robyn Scott), who gives her one last chance to right her wrongs on Earth. To do so, she’ll have to mend her relationships with friends and family, from her caring, yoga-loving father, to her estranged mother, to, of course, Lisa. Directed by Stephen Herek (101 Dalmations), written by Carrie Freedle, and produced by Robyn Snyder and Deborah Evans, Afterlife is set to premiere on Netflix on Sept. 2.

Justice tells Bustle that plenty of pals will relate to Cassie and Lisa’s struggles. “At a certain point in the story, Cassie says something like, ‘I don't want to just be best friends out of habit,’” the actor says. “I think there have been times in everyone’s lives where you maybe feel like you're getting some distance in a friendship and you're growing apart.”

In a way, the film is a platonic love story, as the BFFs realize how much they truly mean to each other. “I think it's refreshing that it's a movie that's not just about like getting the guy you like,” Justice says. “Cassie’s [not] coming back down to Earth to find the love of her life or mend whatever with her ex-boyfriend or something... I think it's important for young women to see female friendships being portrayed in a way where women are not just sitting around talking about men. Female friendships are so deep and complex and fulfilling in so many other ways.”

While filming the movie amid the COVID-19 pandemic, Justice naturally took stock of her own relationships. (She’s decided that her little sister, Madison Reed, is her true “best friend.”) The actor hopes that the movie will help viewers do the same. “At the end of the day, I feel like it's a story that reminds you to not take life for granted and that life is precious, and that we have to be kind and take care of the people that we love,” she says. “Because you never know when it's all going to be over.”

Life is precious, indeed — and it also has a way of coming full circle. Justice says she knew she was “meant to be” cast in Afterlife because of an unintentional Victorious reference. “What’s so funny is that when I first read the script [for Afterlife], my character's name was initially Tori,” Justice says, laughing. “I was like, guys, this is hilarious, but also we can't do that because ‘been there, done that.’” Eventually, Justice suggested Cassie herself, after her mother said she considered it as a baby name. But Tori isn’t the only Victorious character Cassie has something in common with. “She's probably most like Trina,” Justice says, citing that iconic birth week. “But you know, not as outwardly obnoxious as Trina is. Although she has some moments.”

And like Victorious, Afterlife also taps into Justice’s musical side. The actor co-wrote one of the film’s four original songs, “Home,” alongside co-star Spencer Sutherland. The goal was “to write a song that was not a love song, but a life song, and life songs are a little bit harder to write because it can just get cheesy easily, you know?” she says. “But I feel like we really did strike that balance.”

Still, don’t expect her to bring back Tori or even her Zoey 101 character Lola anytime soon. “I guess never say never, but I can't say at the moment that I'm chomping at the bit to play those characters again,” she says. “It happened in that moment in time and I feel like it should kind of always be remembered in that time. I think that's what makes it special and nostalgic.” Luckily, it won’t be long before Justice’s fans are just as nostalgic for Afterlife as they are for those childhood classics.

Afterlife of the Party will be released on Netflix on September 2, 2021.

More like this
The First Trailer For 'That '90s Show' Includes So Many Nods To The Original Series
By Jack Irvin, Alyssa Lapid and Grace Wehniainen
17 Photos Of The 'Wednesday' Cast Vs. The 1991 'Addams Family' Cast
By Grace Wehniainen
Jodie Turner-Smith & Joshua Jackson's Relationship Timeline Includes Her Proposing
By Jake Viswanath
The 'Love, Lizzo' Harry Styles Scene Is Just 1 Moment That Made Fans Feel Seen
By Brad Witter
Get Even More From Bustle — Sign Up For The Newsletter