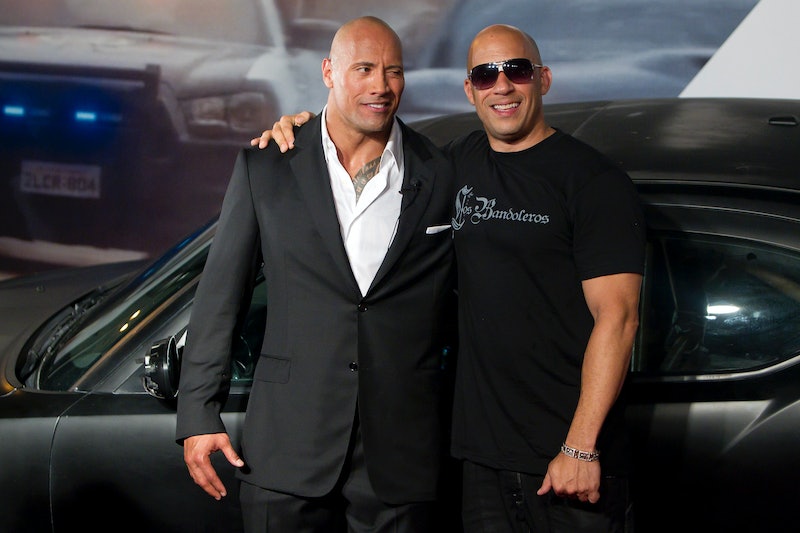 Forget all the drama — Vin Diesel is ready not just to share the screen with Dwayne Johnson again but to actually publicly welcome him back into the fold. The two actors’ feud has not been a secret, as Us Weekly recently detailed, going back to August 2016. Now, however, Diesel has written a lengthy Instagram message to Johnson, requesting that his former co-star “show up” for the final Fast & Furious movie, Fast 10.

Addressing Johnson as his “little brother Dwayne,” Diesel wrote that “the time has come.” He highlighted their history, saying, “As you know, my children refer to you as Uncle Dwayne in my house. There is not a holiday that goes by that they and you don’t send well wishes…” The actor’s return is needed, Diesel explained, because “the world awaits the finale of Fast 10.”

“The time has come,” he wrote in his caption. “Legacy awaits. I told you years ago that I was going to fulfill my promise to Pablo. I swore that we would reach and manifest the best Fast in the finale that is 10! I say this out of love... but you must show up, do not leave the franchise idle you have a very important role to play. Hobbs can’t be played by no other. I hope that you rise to the occasion and fulfill your destiny.”

Johnson first joined Diesel in the Fast & Furious franchise for 2011’s Fast Five. By August 2016, however, it became clear that there was tension between the co-stars. The Red Notice star posted some shade on Instagram at the time, calling some of his cast mates “candy *sses” and disparaging their professionalism without specifying which ones. It got to the point, according to a Hollywood Reporter source in 2017, that the Fast team was “keeping them separated as much as possible” during the Fate of the Furious press tour. Johnson later skipped F9, and he next reprised his role as Luke Hobbs in the spinoff Hobbs & Shaw. Afterward, his producing partner Hiram Garcia told Collider that the former wrestler would not return to the Fast & Furious films “for all the evident reasons.”

More recently, the two actors have appeared to be on somewhat friendlier terms. Johnson told Vanity Fair in October that he “meant what [he] said,” but that it “was not the right thing to do” to go public with it. While he described them as “philosophically two different people” with different approaches to “the business of moviemaking,” he did at one point thank his “brother Vin” after Hobbs & Shaw came out, per Metro UK. Diesel, for his part, copped to a “tough love” approach that Johnson might not have appreciated during a Men’s Health interview in June.

Now, we’ll see if bygones can be bygones and the two stars will ride together one final time.