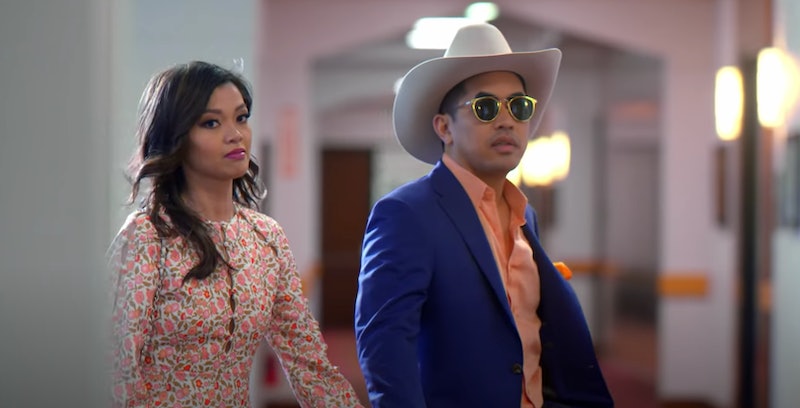 Those still upset about Keeping Up With the Kardashians coming to an end may have a new show to get excited about: HBO Max's new reality series House of Ho, which follows the luxurious lifestyles, interpersonal drama, and cultural traditions of the Ho family.

Heading up the family is Binh and Hue Ho, who immigrated from Vietnam to Houston, Texas in 1975 to give their children the "American dream." Now, their eldest son Washington, his wife Lesley, and his siblings Judy and Reagan all live quite lavishly, an accomplishment he attributes the diligent work ethic imbued in them by their parents. "We always saw our parents working very hard," Washington told the Asian Hustle Network podcast. "We're grateful that HBO allowed us to share our story, and we hope to inspire other Vietnamese and Asians around the world."

According to the series trailer, House of Ho will see Lesley and Washington through ups and downs in their marriage as they work to uphold their family's golden image. Here's what else to know about them and their two young children.

Both Washington and Lesley are relatively active on Instagram, especially in the days leading up to the House of Ho premiere. Washington often shares career wisdom, photos of his kids — Roosevelt and Lincoln (spot a theme there?) — and of course, pics with his wife and extended family. Recently, Washington opened up about his decision to stop drinking last year. In his 20s, he was known for his constant partying and tendency to cycle through women.

"On November 22, 2019, as the world was watching me on my global platform, I made a decision to give up the drinking and start living," he wrote. "I did it so I could be the best 'WashingtonHo' that I know I can be, so that I could inspire my kids to stand up for what they feel is right for them." He ended the post by referring the Substance Abuse and Mental Health Services Administration hotline to anyone who may need it.

Lesley shares similar content to Washington on her Instagram, but with a more family-focused lens. On Oct. 24, she posted a photo with Washington to celebrate their fifth wedding anniversary. "It wasn’t easy to get to this day," she wrote. "Every day we put in the effort and fight for our marriage. We Sacrifice and compromise. 5 years and 2 kids later....you’re still the one. I love you."

In his interview with the Asian Hustle Network podcast, Washington said his dad named him after the U.S. founding father and first U.S. president George Washington. It's clear that he wanted to continue that trend by naming both of his children after subsequent presidents. His firstborn, Roosevelt, turned 4 this year and his daughter Lincoln just turned 3.

For a family as successful as the Hos, it comes as no surprise that Washington and Lesley are involved in multiple business ventures. According to Washington's LinkedIn, he's the senior vice president at real estate company Moody Rambin; founder of VoltStreet Energy Advisors, an energy consulting, procurement, and management firm; and a founding shareholder/advisor for Southwestern National Bank. Washington's LinkedIn also calls him a public figure and "Head of Ho Activities" for House of Ho. In the show's trailer, he notes that his dad's retirement from investment and banking is coming up, and he's "taking over." So he's busy with work, to say the least.

According to a press release, Lesley works as a pharmacist, but that's not apparent in her online presence — her Instagram bio simply calls her a wife and mom, so she may have traded her lab coat in for a pair of red carpet-ready heels ahead of the show's premiere.

At work and at home, neither of the two are afraid to have fun — as exhibited by this video of Washington recreating a Magic Mike dance while making a birthday breakfast for his wife.

Or this TikTok challenge he filmed with his niece, Kennedy:

If they're this entertaining online, they'll make a perfect addition to reality TV.