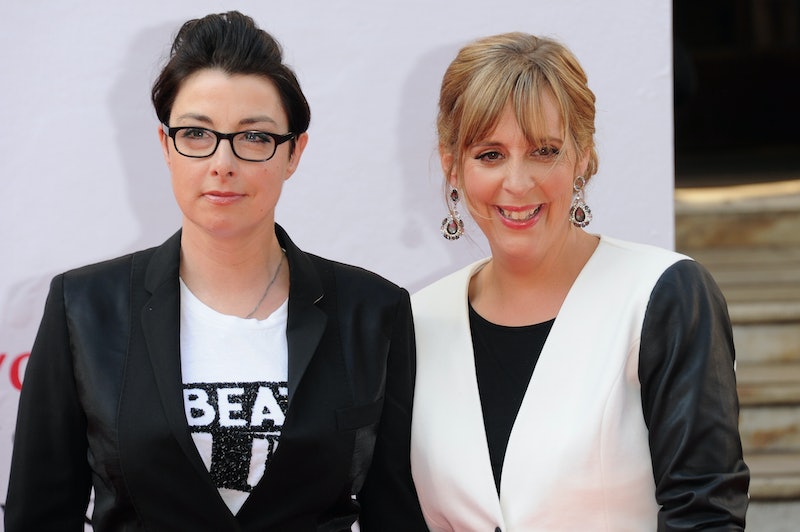 The Great British Bake Off is back once again for its 12th series, but original hosts Sue Perkins and Mel Giedroyc won’t be watching. “I just think it would make me sad to watch it,” Perkins told The Times, adding that they wish the show well. Giedroyc, on the other hand, has only just watched their series. “I am very late to the game,” she said. “But I haven’t watched The Wire yet, either.”

After it was confirmed in September 2016 that the show would move from the BBC to Channel 4, beloved hosts Sue Perkins and Mel Giedroyc announced their departure, alongside judge Mary Berry. While replacements Noel Fielding and Sandi Toksvig, and now Matt Lucas, have risen (sorry) to the challenge, it's hard not to miss the Bake Off originals. So, what are Mel and Sue doing now?

The comedians have been a double act since the '80s, as Radio Times reports. They met at Cambridge University, where they were both members of comedy troupe Footlights. For the duo’s first major venture post-Bake Off , they became hosts of the BBC's Generation Game revival. Unfortunately, in February 2018, the BBC announced that only two of the four filmed episodes would be aired, as the show's April debut was met with less than stellar reviews.

What about solo ventures? Well, Giedroyc also went on to co-host musical talent show Let It Shine with Graham Norton, and later took to the West End stage herself. She appeared in Stephen Sondheim’s Company, Shakespeare’s Much Ado About Nothing at the Rose Theatre, Kingston, and Noises Off. She also delivered the results of the UK Eurovision vote in May 2018. In February 2021, Giedroyc began hosting Unforgivable with Lou Sanders on Dave. The newly anointed Mel and Lou are joined by three celebrity guests who have to spill their darkest secrets, and whoever admits to the worst behaviour wins.

Meanwhile, Perkins published her second book, East of Croydon, in May 2019, after her 2015 memoir Spectacles became a bestseller. East of Croydon is a travel memoir all about her “blunderings through India and South East Asia”. It follows the star's experience creating travel documentaries for the BBC, including 2014's The Mekong River, 2015's documentary Kolkata, and 2017's The Ganges, and 2019’s Japan With Sue Perkins.

Beyond documentaries, Perkins has also hosted BBC panel show Insert Name Here, with team captains Josh Widdecombe and Richard Osman. The show debuted in 2016, and ran until 2019. Sadly, her 2017 spelling bee show, The Big Spell, was cancelled by Sky One after the first series, as the Sun reports. Perkins was also the voice behind Dragon in the second season of The Masked Singer in Feb. 2021.

Essentially, Mel and Sue have been keeping busy since their Great British Bake Off departure, which is good news for fans of their sharp wit and solid friendship. What can we expect from them next? A return to TV together, in the second series of Sky’s action-comedy Hitmen, slated to premiere before the end of the year. Titled Hitmen: Reloaded, the show will also star The I.T. Crowd’s Katherine Parkinson, Goodness Gracious Me’s Sanjeev Bhaskar, Phoenix Nights’ Alex Lowe, Holby City’s Chizzy Akudolu, and Man Down’s Mike Wozniak.

Obviously, Mel and Sue are still sorely missed in the Bake Off tent, but, every time someone makes an inadvertently sexual comment about an innocent baked good, their GBBO spirit lives on.

More like this
We’ve Got A Text! 'Love Island' 2022 Finally Has A Release Date
By Sam Ramsden and Frances Stewart
BBC Three Is Launching A New Gay Reality Dating Show
By Sophie McEvoy
'Dubai Hustle' Is BBC Three’s Answer To 'Selling Sunset'
By Catharina Cheung
Lisa Kudrow Doesn't Remember Filming 'Friends'
By Sam Ramsden
Get The Very Best Of Bustle/UK