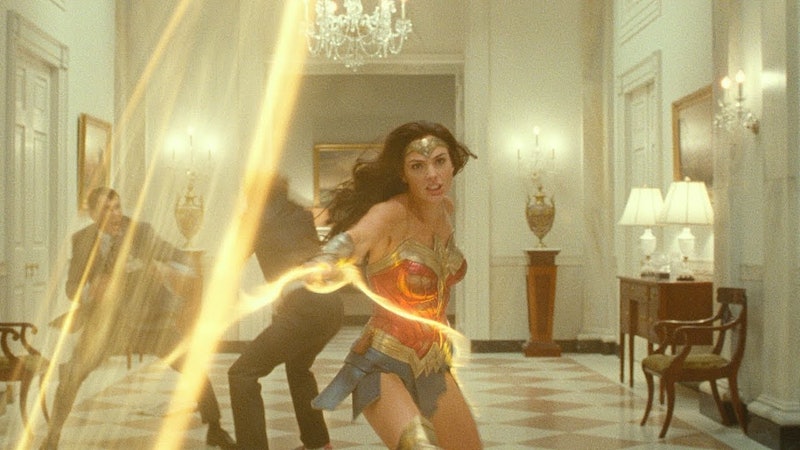 There's something uniquely exciting about Wonder Woman (and the forthcoming Wonder Woman 1984). I mean, what could be better than watching a female superhero lead her own movie (which is also directed by a woman, one Patty Jenkins) and look absolutely badass doing it? If you are as hyped as I am, then you may have gobbled up the Wonder Woman 1984 trailers with the fervor of a thousand Themysciran princesses. Even after multiple viewings, though, you'd be forgiven if you're still unsure exactly what Wonder Woman's powers are and how she acquired them.

According to the DC Comics wiki for Wonder Woman, the hero's powers and abilities include: superhuman strength and durability (both assets during big battles); the power of flight (she can glide through the air on currents in the wind); superhuman speed, reflexes, and agility; finally, enhanced senses, including smell, vision, and hearing. Many of Wonder Woman's special powers are rooted in her divine origins. As a woman created by Zeus, she is imbued with the superhuman qualities often associated with Greek gods, and these powers are all seen at points throughout the new movie.

The DC Comics wiki also includes mentions of Wonder Woman's other interesting superpowers, like increased empathy which was bestowed on her by the Greek goddess Artemis. This allows Diana to have a deep emotional understanding of all creatures and people, going so far as to detect them in an ostensibly physical manner. In the film, this is a major asset in helping her her WWI nemeses.

Screen Rant also wrote about some interesting abilities you may not know Wonder Woman has. These include omnilingualism (she can speak the language of any person she encounters), super healing, telepathy, animal empathy, and super breath (basically, she can breathe as forcefully as a gust of wind). OK, I think it's safe to say Wonder Woman is the coolest superhero on the planet.

But she's not done leveling up her superhero game just yet, oh no. Eagle-eyed fans combing through the Wonder Woman 1984 trailer have spotted some fascinating new powers for the "very much evolved character," which is how Gal Gadot described Diana in a chat with GamesRadar. ScreenRant pointed out that Diana shows off some slick new lasso combat tricks in the WW1984 trailer, as well as a very showy "swinging from lightning" kind of power — which tracks, given she's the daughter of Zeus, the god of lightning.

However, some fans have been theorizing about something that's arguably the most exciting potential addition coming in WW1984: Diana's invisible jet. A shot in the trailer shows Diana and Steve Trevor both riding in a cockpit of some kind as fireworks explode all around them. As ComicBook.com and fans theorize, this is purportedly a look at the both of the riding in Wonder Woman's iconic invisible jet. But until the movie premieres, this is but a theory.

Having all these weapons and a dizzying array of powers doesn't mean Wonder Woman is a slouch of a superhero. If anything, her superpowers indicate she is an incredibly strong and capable heroine who is every bit as powerful as her male counterparts.