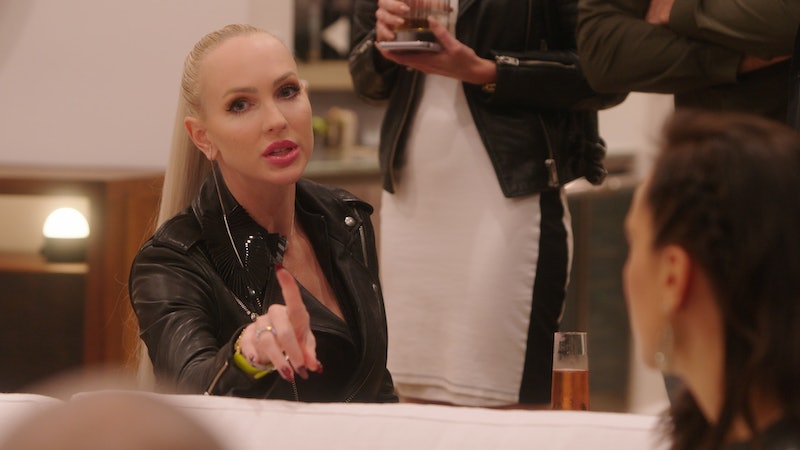 Selling Sunset stars Christine Quinn and Chrishell Stause have had a rocky relationship since the beginning, but things reach a true boiling point in Season 4. After Christine made several inflammatory comments about her in the press, Chrishell decided to stop playing nice and air out her true feelings about her costar. “I used to talk around it,” she told Entertainment Tonight. “It is what it is. We’re not trying to fool anybody here.”

Chrishell added that their relationship will remain “at a standstill” until Christine puts in some sort of effort to smooth things over. “I think what everyone is really looking for is some accountability and just saying, ‘Listen, I’ve done this. I’m sorry, and let’s move forward,’” Chrishell continued. “It’s hard to work with nothing, so everyone [has] just kind of gotten to a place where the bridges have been burned. There’s been no effort to fix it.”

As for what Christine said about Chrishell to cause such a rift? Here’s a breakdown.

After calling Chrishell “shady” and “a crazy person” in Selling Sunset’s Season 1 finale, Christine spoke to Page Six about Chrishell’s divorce from This Is Us star Justin Hartley. “We all just thought maybe they were having communication problems for a while,” she said. “We heard that they were in therapy, so obviously there were some issues going on with them. … I hung out with him many times and he was an absolute doll. … He has been nothing but nice and supportive to us.”

Afterward, Chrishell slammed Christine on Twitter for sharing false information. “Let me be VERY clear. She knows absolutely nothing about the situation and is obviously desperate to gain attention by doing so. Anything from her is either a complete lie or total conjecture on her part,” she wrote. Chrishell added that it was “so frustrating and unfortunate that someone would use [a] personal painful situation to get press for themselves,” reiterating that Christine had “absolutely zero knowledge” about her marriage to Hartley.

Undeterred, Christine again discussed Chrishell’s divorce on the Not Skinny But Not Fat podcast. “I think what she was honestly mad about was the fact that, you know, she’s trying to, you know, have this portrayal of Justin Hartley being such a bad guy and just walking out on her,” Christine said of the way the breakup was portrayed on Selling Sunset. “But, you know, I don’t know. I mean, I know only, like, I’ve met him and he was nice to me, and that’s what the interviewer asked me and that’s what I was going off of ... Maybe she got mad that I was saying he’s a nice guy.”

Christine added that Chrishell had blocked her “on all mediums,” but that she hadn’t bothered to do the same. “I don’t even know how to do that, nor do I even care. I’m like, what? This is so silly, you’re like 40.”

After catching wind that her castmate had accused her of “being dramatic for no reason” and always having “this victim mentality,” Chrishell fired back in her Instagram Stories, “Not a victim, never have been. I am a victor of many things and thriving. I can’t wait for you to get there so you can stop with this nonsense.”

In May, Heather Rae Young shared an Instagram video with Chrishell, Mary Fitzgerald, and Maya Vander announced they’d reunited for filming on Selling Sunset Season 4. Christine then shared her own post, which many interpreted as shade. “I don’t hang with jealous b*tches, that’s a weak disease,” she captioned a series of solo shots, borrowing a line from Bia’s “Whole Lotta Money.”

With Selling Sunset once again in the press, expect more shots to be fired.