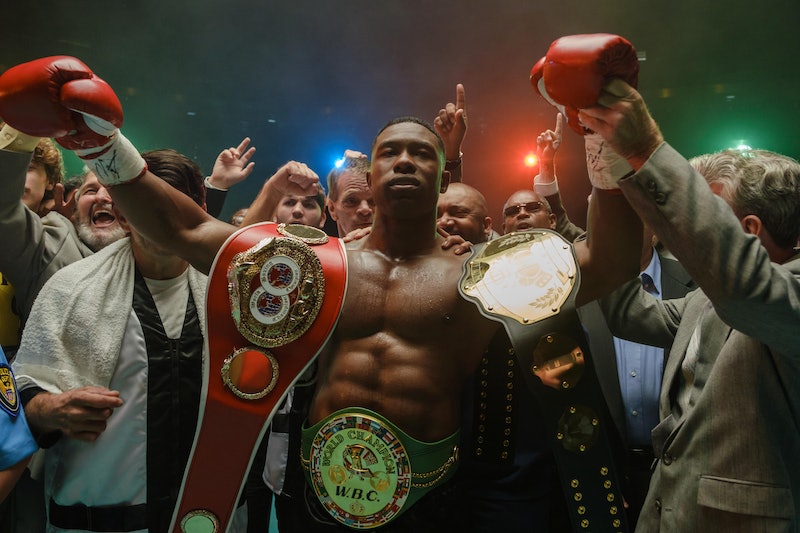 The eight-part limited Hulu series, Mike, is billed as the turbulent true life story of heavyweight boxing champion Mike Tyson. Inviting viewers to step into the ring with “Iron Mike,” the show revisits how the boxer (played by Trevante Rhodes) navigated poverty, addiction, and controversy, while also attempting to shed light on “issues of race, class, fame, misogyny, and the media in America.” But the real Tyson hasn’t pulled any punches regarding his thoughts on the series.

As soon as Hulu announced Mike in February 2021, Tyson condemned the series on social media, claiming that the company did not compensate him. He also blamed “Hulu’s corporate greed” for the “tone-deaf cultural misappropriation of the Tyson life story.” He continued, “To make this announcement during Black History Month only confirms Hulu’s concern for dollars over respect for Black story rights.”

When Mike’s Aug. 25 premiere date drew closer, Tyson spoke out again to blast the series. “Don’t let Hulu fool you,” he wrote via Instagram on Aug. 6. “I don’t support their story about my life. It’s not 1822, it’s 2022. They stole my life story and didn’t pay me. To Hulu executives, I’m just a n— they can sell on the auction block.”

In a separate post the same day, Tyson also accused Hulu of trying to “desperately pay” UFC president Dana White millions to promote Mike without offering him a dollar. “He turned it down because he honors friendship and treating people with dignity,” the boxer added. “I’ll never forget what he did for me just like I’ll never forget what Hulu stole from me.”

Days before Tyson’s most recent statements, series creator Steven Rogers explained his position during a virtual Television Critics Association panel on Aug. 4. “We actually couldn’t talk to him because his life rights were already taken, so that was never on the table,” he told reporters, according to TheWrap. “I would hope that if he watches it that he would change his opinion.”

Having based the series on “extensive research of factual accounts, interviews, [and] footage of real-life events,” Rogers added that, as a writer and storyteller, he doesn’t like to rely on a single source. “I really like to do the research and get all these different opinions and then put a story around all of that. I don't like to be beholden to just one person,” he said.

Meanwhile, showrunner Karin Gist told Entertainment Weekly in June that Mike “is not meant to glorify” the boxer’s life. “We were never trying to say that Mike Tyson is a hero or Mike Tyson is a villain,” she elaborated. “Our goal was to take a very complicated and controversial figure and try to get under the hood of what he was praised and vilified for while staying true to our North Star of ‘no one person is one thing.’”

More like this
Pamela Anderson’s Dating & Marriage History Could Be Its Own TV Series
By Jake Viswanath
Wait, Is Barney Stinson Related To Sophie On 'HIMYF'?
By Gretchen Smail
Andy Cohen Apologized To Larsa Pippen After A 'RHOM' Season 5 Reunion Dust-Up
By Brad Witter
Everything To Know About The 'Daisy Jones & The Six' TV Series
By Maxine Harrison and Brad Witter
Get Even More From Bustle — Sign Up For The Newsletter
From hair trends to relationship advice, our daily newsletter has everything you need to sound like a person who’s on TikTok, even if you aren’t.