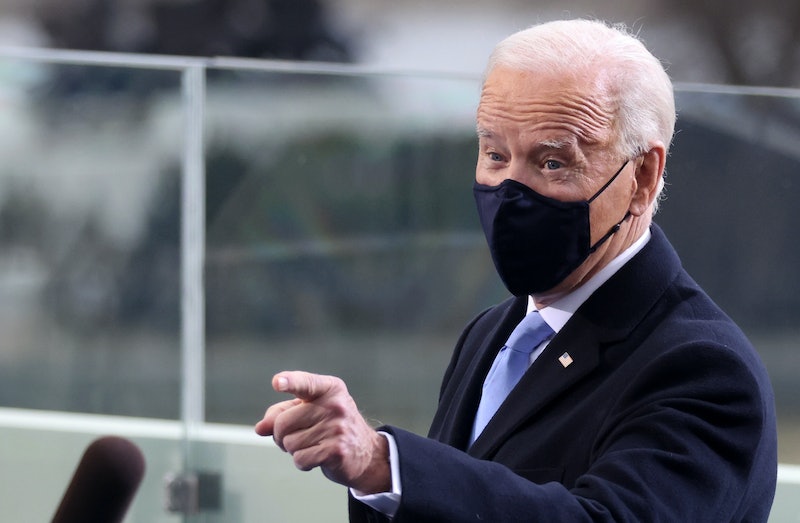 Donald Trump may have broke American tradition by not attending President Joe Biden's inauguration on Jan. 20 (yet another reason he didn't "make America great again"), but he did carry on at least one presidential tradition. Trump reportedly left a note for Biden, which the current president will not reveal but called "generous" during an afternoon press conference. Because the contents of the message have yet to go public, the internet is speculating what Trump may have written. Of course, the resulting memes and tweets are nothing short of hilarious.

News of the note was first reported on Twitter by Washington Post reporter Josh Dawsey, who was told by a White House spokesman. NBC News confirmed that a presidential aide left Trump's note in the Oval Office and reported that Mike Pence also wrote a letter for his successor, Vice President Kamala Harris.

The move was surprising to many, given how Trump has acted since losing the election. He never formally conceded to Biden, didn't even mention him in his final White House video and speech, and falsely claimed that he actually won the election multiple times, rousing many of his supporters to attack the Capitol building on Jan. 6 in an attempt to stop Senate hearings confirming Biden's win. Needless to say, Trump is still coming to terms with his loss, and many Twitter users are using that to predict what he could have written to Biden. Hint: they're not the nicest or most formal words.

The tradition of writing presidential letters to one's successors dates back to Ronald Reagan, who hand-wrote a humorous note to George H.W. Bush in 1990. The preceding memos have been more formal and full of advice. Trump was indeed the recipient of a letter from Barack Obama when he took office in 2017, something that he is now passing along to Biden. It seems he at least got one tradition right, but time will tell how thoughtful the note is.