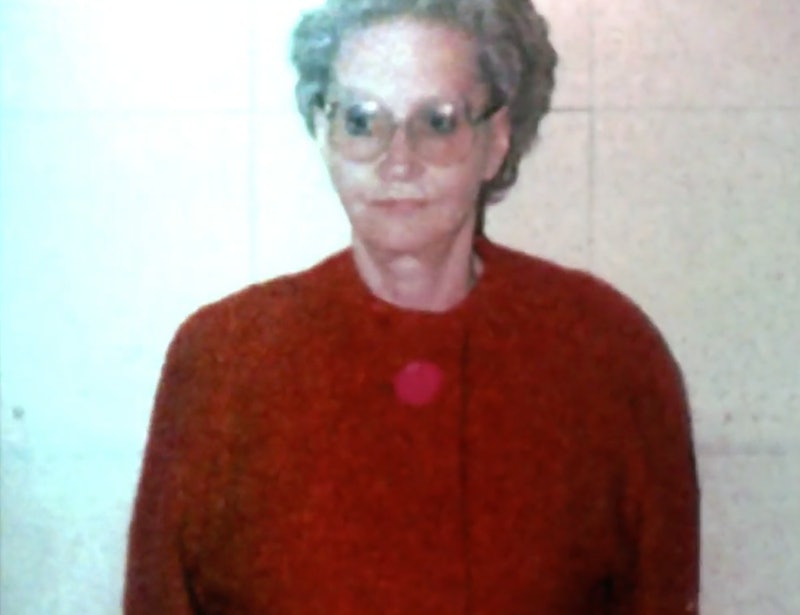 As part of its “Serial Killer Week” programming, Oxygen is airing Murders at the Boarding House on April 17 and 18, focusing on the case of Dorothea Puente. According to Oxygen, she was convicted of killing several of the tenants who lived in her Sacramento boarding house. The crimes earned Puente the nickname “Death House Lady.”

According to Sactown magazine, the case begins in 1988, when investigators were prompted by a social worker to look into the disappearance of one of the social worker’s clients. Detectives visited his last known address — Puente’s boarding house. When they noticed the ground in her yard had been disturbed, they started digging. They soon found seven bodies of Puente’s former tenants.

The Los Angeles Times reported that Puente was charged with those seven murders as well as two others from years prior that were found to be connected to her — including the death of her ex-boyfriend. The prosecution accused Puente of drugging her tenants with lethal prescription drugs in order to cash their social security checks.

Per the Times, the jurors could not agree on several of the murder charges and ended up only convicting Puente on two charges of first-degree murder and one charge of second-degree murder. Puente was found guilty of the murders of 64-year-old Dorothy Miller, 55-year-old Benjamin Fink, and 78-year-old Leona Carpenter. Puente got the second-degree charge for Carpenter’s death, as she technically died from a drug overdose, but the jury ruled that Carpenter could not have voluntarily walked across her room to take the pills on her own. Puente was not convicted of the deaths of her five other tenants or her ex-boyfriend, per Oxygen. The jury was also unable to agree on a death penalty sentence for Puente, according to Sactown. Instead, she was sentenced to life in prison without the possibility of parole.

Puente served her sentence at the Central California Women’s Facility in Chowchilla until her death in 2011. According to the Times, she died of natural causes at the age of 82. Two years before her death, Sactown published an in-depth article in which reporter Martin Kuz visited her several times in prison. He wrote about what her daily life was like in jail, and how she still insisted that she was innocent of the crimes.

Puente did her best to keep herself busy day-to-day, often getting up at 4:30 a.m. to carry out chores in her cell like gathering dirty clothing to wash. She had access to books and TV and was a fan of authors John Grisham and Dan Brown. She loved to tune into crime shows like Criminal Minds, CSI, and Cold Case. Sactown reported that a prison official said that Puente didn’t cause trouble. “[She’s] very low-key, very quiet,” the official said, adding that the other inmates were aware of Puente’s crimes. “The inmates know who she is. They know what she’s done.”

According to Apartment Therapy, Puente’s boarding house was later purchased by Tom Williams and Barbara Holmes, who wanted the land to be a space where their grandkids could play. But the negative history attached to the house had to be dealt with first, and the home ended up on the Quibi show Murder House Flip. In the premiere episode, designers Mikel Welch and Joelle Uzyel helped transform the historic property, adding new turf and a gazebo. For the grandkids, a swing set was placed where Puente’s bodies were once found.

More like this
A New Netflix Doc Will Explore The Unsolved Murder Of Jill Dando
By Sam Ramsden
This First Look At 'The Gold' Shows Jack Lowden In A Whole New Light
By El Hunt and Sam Ramsden
'RHOSLC' Star Jen Shah Refuses To Do A Post-Sentencing Interview With Andy Cohen
By Brad Witter and Jake Viswanath
What Really Happened Between Lea Michele & Sadie Sink On 'The Tonight Show'
By El Hunt
Get Even More From Bustle — Sign Up For The Newsletter
From hair trends to relationship advice, our daily newsletter has everything you need to sound like a person who’s on TikTok, even if you aren’t.