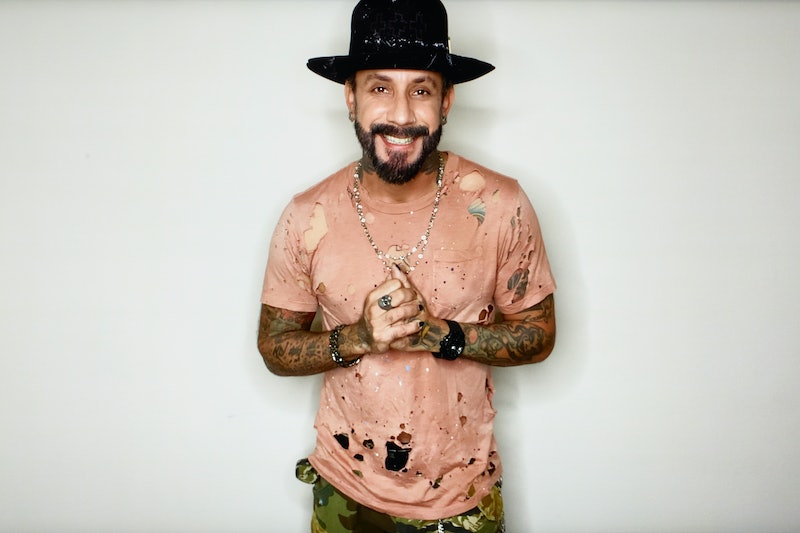 In preparation for an unprecedented season of Dancing With The Stars, AJ McLean has been hyper-focused on his fitness and family. The Backstreet Boys member and his wife have two daughters — Ava, 7 and Lyric, 2 — who, along with DWTS, motivated him to take control of his health at the start of quarantine. Five months in, his hard work is paying off and he's excited to hit the dance floor.

McLean recently told Entertainment Tonight that despite what people think, his boy band days don't give him a leg up in DWTS rehearsals. "Having to reprogram my brain from 30 years of dancing more urban-style dancing to having really good lines, putting my chest up and my head up, or back," he said, is difficult.

He couldn't tease much about the season premiere, but did say his first dance is "fast" and it's to a song by The Weeknd. He's hopeful that if he makes it far enough, he'll eventually dance to a BSB track. "I think it would be cool to add some kind of element from what the fans know," he told the outlet. "If it's the hat routine, that's a pretty signature Backstreet move."

McLean added that rehearsals are admittedly leaving him sore "in places I didn't know I had on my body," but that he's been rigorously preparing for the show. Before the DWTS cast was announced, he shared his fitness goals and hinted at the forthcoming reveal in an Aug. 24 Instagram TV video. “I’m on a very strict diet, grain-free, gluten-free, sugar-free, no sodas of any kind, and completely sober for almost nine months,” he said. "[I'm] trying to get myself prepared and ready for what’s to come in the next few weeks."

On Sept. 8, he shared a before and after photo of his progress. "The transformation is unrecognizable and I couldn’t be happier," he wrote. "I’m dancing like I never have before." In a recent interview with Access Hollywood, McLean also revealed that he just completely shaved his head, lifting his hat to show its shine. "My kids are still a little freaked out," he laughed. But they, as competitive dancers themselves, love seeing their dad on the dance floor. "They think it's fantastic."