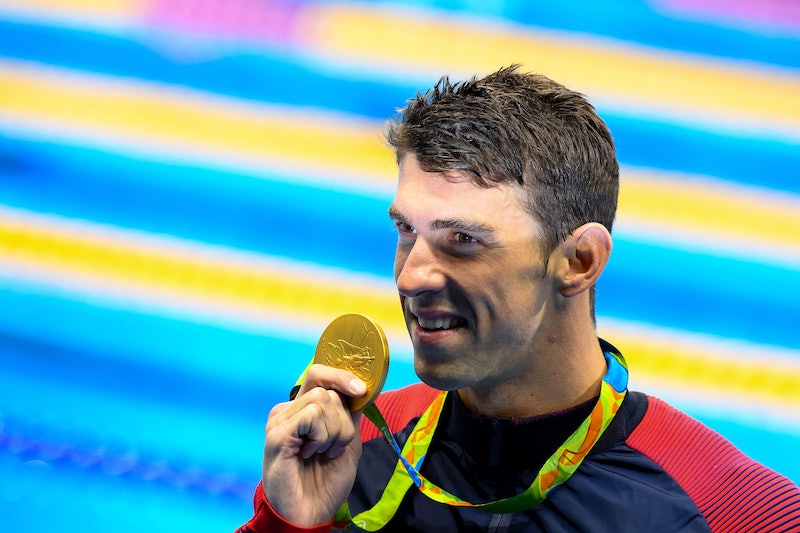 If there is one thing The Weight of Gold wants its audiences to remember, it is this: outward success and the pursuit of peak physical perfection aren't worth a thing if it's all done at the cost of neglecting mental health. This is true for each and every subject in HBO's newest sports documentary (premiering July 29), regardless of how successful they may or may not be. Take, for example, The Weight of Gold's narrator and one of its prime subjects, Michael Phelps. Boasting 28 medals — counting team and individual events — over his five Olympic appearances, Phelps is the most decorated Olympic athlete in history. But despite his record breaking success, Phelps struggled with his mental health after retiring from Olympic competition.

In The Weight of Gold, Phelps and fellow athletes Shaun White, Apolo Ohno, Sasha Cohen, and more discuss the immense amount of focus and drive required to even begin training for the Olympics. For many of them, the urge to make it to the Olympics begins in early childhood, and affects them long after the games are over.

The emotional price athletes pay to reach the Olympics is an immense one, with Phelps estimating that "A good 80%, maybe more, go through some kind of post-Olympic depression." He also speaks about his own experiences with depression and suicidal thoughts. "I thought of myself as just a swimmer, and not a human being. And that's where I just thought, 'Why don't I end it all,'" he recalls.

While Phelps' mental health battle has been well documented — with the media reporting on his two DUIs and subsequent arrest — The Weight of Gold goes a step further. Phelps sheds new light on his struggles with depression and substance abuse that led him to check into rehab in 2014 following his second DUI and commit to rebuilding himself.

To this day, Phelps continues to work to improve the mental health of Olympic athletes. Speaking with The Baltimore Sun, Phelps expressed his disappointment at the U.S. Olympic & Paralympic committee's inadequate response to pleas for better mental healthcare, saying, "These are people who truly should be taking this on. It’s frustrating that we’re sitting here watching them do absolutely nothing."

Most recently, Phelps urged the committee to take caution with athletes' mental health in the wake of the delay of the Tokyo 2020 Summer Games due to the COVID-19 pandemic. "Your whole life is pointed toward this moment," Phelps told NBC Sports. "And then this huge curveball. 'Nope, you've got to wait another year.' If this had happened to me, I would be completely flipping out at the uncertainty. I mean, speechless. Like, is this a bad dream?"

He continued, "I really, really hope we don't see an increase in athlete suicide rates because of this. Because the mental health component is by far the biggest thing here. This postponement is uncharted waters. We've never seen this before. It was the right decision, but it breaks my heart for the athletes."