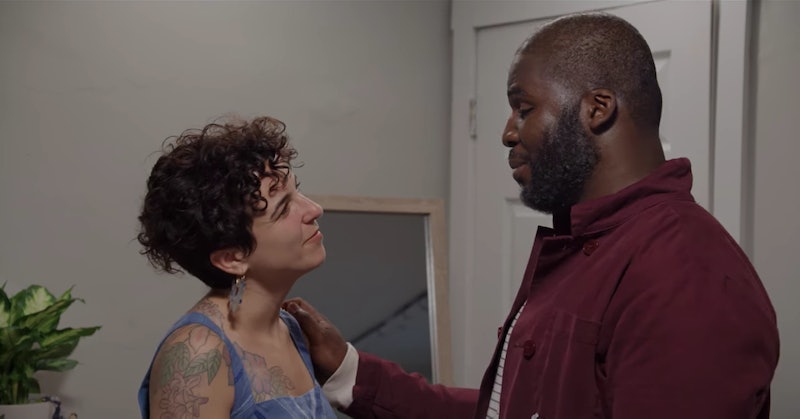 It's been almost a year since Queer Eye Season 5 hero Nate McIntyre met the Fab Five, and he's been taking to heart what he learned from the show: that "you just can't do it on your own," he tells Bustle. You have to "accept help from others and then reach out and get more support."

Since the COVID-19 pandemic forced him to temporarily close his gym, Body Rock, Nate has been trying to stay connected to his community by creating an Instagram series called "Getting the Bag," in which he teaches viewers how to exercise with a convenient and affordable at-home workout tool: sandbags. But he says making videos by himself in an empty gym can get lonely, so he reached out to a local breakdancing instructor, a yogi, and a hip-hop dancer to put together their "own little Queer Eye [team] of trainers." He envisions it as a co-op called the All-Star Outcast DIY Fitness Academy, which will combine the "best of hip-hop culture and the best of fitness culture."

"There is a certain sense of community that comes from working out together, sweating together, experiencing this stuff," Nate says.

He also collaborated with a Philadelphia DJ to release an exercise mixtape he calls "The Body Rocking, Corona-Free Trap vs. Funk Motivational Mixtape." Nate contributed two songs, which are the first and last tracks on the album.

As for his relationship with Kristen, his ex-girlfriend and one of his Queer Eye nominators who he rekindled things with at the end of his episode, Nate says that she's now engaged to someone else. There aren't any hard feelings, though. "We still have a great relationship," he explains. "She helps and supports me even to this day in everything that I do. I love her to death."

Most importantly, Nate feels more hopeful about the future than ever. "I think that we could potentially come out on the other side so much better," he says regarding the national outcry surrounding George Floyd, Breonna Taylor, and Tony McDade's killings by police. "So, I'm keeping my fingers crossed... It seems like people are hearing you more ... it's inspiring to feel that for the first time in my life."

More like this
‘The Ultimatum: Queer Love’ Is Officially On The Way
By Radhika Menon and Kadin Burnett
Netflix's 'Bling Empire' Season 3 Trailer Includes A 'Selling Sunset' Cameo
By Kadin Burnett and Sam Ramsden
What’s New On Netflix: Ana De Armas’ 'Blonde' & A Nick Kroll Special
By Arya Roshanian
Here's How To Apply For 'Love Is Blind,' No Matter Where You Live In The US
By Grace Wehniainen
Get Even More From Bustle — Sign Up For The Newsletter