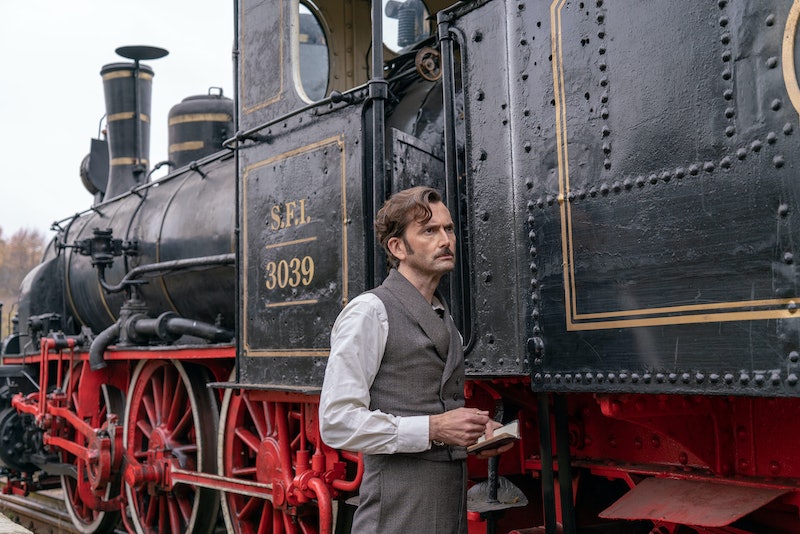 This New Year, BBC One will be adapting Jules Verne’s 1872 novel Around The World In 80 Days with David Tennant at its helm. The series will span eight episodes, leaning on the source material while also taking a few cinematic detours, too. But one burning question you may have while watching (if you don’t mind spoilers, that is) is what’s the book ending for this famous novel?

Well, as mentioned, this classic was written by French writer Jules Verne and was first published in French (Le Tour Du Monde En Quatre-Vingts Jours) in 1872. The plot tracks Phileas Fogg (played by David Tennant) and his newly employed French valet Passepartout (played by Ibrahim Koma) in their globetrotting adventures, as they attempt to circumnavigate the world in 80 days to win an impossible “gentleman’s wager.”

In the book, Phileas Fogg is an unflappable, solitary English gentleman who lives a very structured life. In his adventures with the emotional Passepartout, he moves from extraordinary scenario (think: being framed for a bank robbery) to extraordinary scenario (like using a sail-powered sledge to travel over snow to Nebraska). So far, so simple.

This unlikely pair travel from London to Europe, through India, to Hong Kong, then to Japan, across to San Francisco, and on to New York. From here, they miss a ship that’s departing for London by just 45 minutes, and to make up time, they hijack a ship bound for France. Naturally. Fogg arrives in Liverpool but is arrested for a crime he hasn’t committed (remember that bank robbery we talked about?) and when he is finally released, he arrives in London five minutes late for his bet.

At the end of the book, Fogg is betrothed to a young widow whose life they saved while travelling through India. As Passepartout is sent out to find a clergyman to marry them, he discovers that, because they travelled through time zones, they have indeed gone around the world in 80 days. This neat, satisfying ending means that Fogg won the wager as well as the princely sum of £20,000.

While we don’t know what the ending is for the television series, we do know the two production companies behind it – Slim Film + Television and Federation Entertainment – have already given a second series the green light. The producers revealed that the next season will be another adaptation of Jules Verne – this time, The Journey To The Centre Of The Earth.