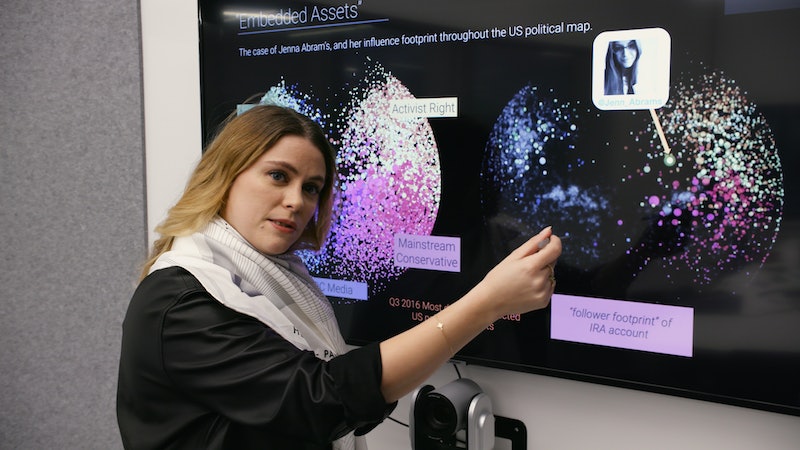 Facing the 2020 election in front of us, it's natural to look back and try to understand the election of 2016 and figure out exactly how Donald Trump got elected. The new HBO documentary Agents of Chaos tries to uncover just one element that may have contributed to Trump's election: Russian internet interference.

Directed by Alex Gibney, the intensive doc uses years of reporting on Russian election interference, never before seen looks inside the Russian troll farms that employed the people who flooded the internet with fabricated information, and videos from the Russian deep web where the top decisions were being made. It's an eye-opening film that may lead you to never trust anything you read online ever again — and that might be a good thing.

The first quarter of the doc focuses on one organization, in particular, Russia's Internet Research Agency. What we might now know as the "Russian Troll Farm," this building full of bloggers and meme-makers used Facebook, Twitter, Pinterest, Reddit, and other social media to spread articles, memes, and other web-based info with the sole purpose of creating chaos in the U.S. But how did it work? And how might have Russia's Internet Research Agency (IRA) possibly led to the Trump presidency?

What is the Internet Research Agency?

The Internet Research Agency is a company based in St. Petersburg, Russia whose goal is to influence online engagement in favor of Russian political and economic interests. The organization was owned and run by Russian oligarch Yevgeny Prigozhinm also known as "Putin's chef," the man who serves him his meals.

How does the Internet Research Agency work?

When did the Russian Internet Research Agency start?

According to Agents of Chaos and an in-depth report by the New York Times Magazine, the IRA first began back in 2013 with the initial goal of boosting up Putin within Russia. Fake users praised Putin and flooded the internet with comments supporting him while chastising anyone who dared criticize the Russian president. Operations within the IRA then turned to the unrest in Ukraine, with IRA operatives fueling the battle between pro-Russian Eastern Ukrainians and pro-Europe Western Ukrainians online with anti-Semitic and fascist fears flooding both sides.

What did the Internet Research Agency do in the U.S.?

As the film details, since Hillary Clinton was tough on Russia and Putin as Secretary of State under President Obama, Russia would benefit from having her opponent, Donald Trump, win the presidency. As Camille François says in the film, "Was the IRA pro-Trump? I think that's a tricky question, the IRA was anti-America. In general, they were interested in any message that weakens the democratic institutions of the U.S...The target is trust." The IRA flooded the internet and social media platforms with chaos on both sides, even luring Americans to contribute. They created fake groups that organized protests, spread false information, and sowed the seeds of discord that already existed in America.

In February of 2018, a U.S. Grand Jury indicted 13 Russian nationals and three Russian organizations, including the Internet Research Agency, on "charges of violating criminal laws with the intent to interfere with U.S. elections and political processes," according to the Justice Department, CNBC reports. Facebook shut down multiple accounts run by the IRA, among other crackdowns. These moves effectively shut down their operations. But that doesn't mean that the 2020 election isn't being affected as well.

As CNN points out, Prigozhinm seems to have simply moved his operations from Russia to the West African nations of Ghana and Nigeria and is actively working to influence the 2020 election. So sadly, Russian interference seems as busy as ever.