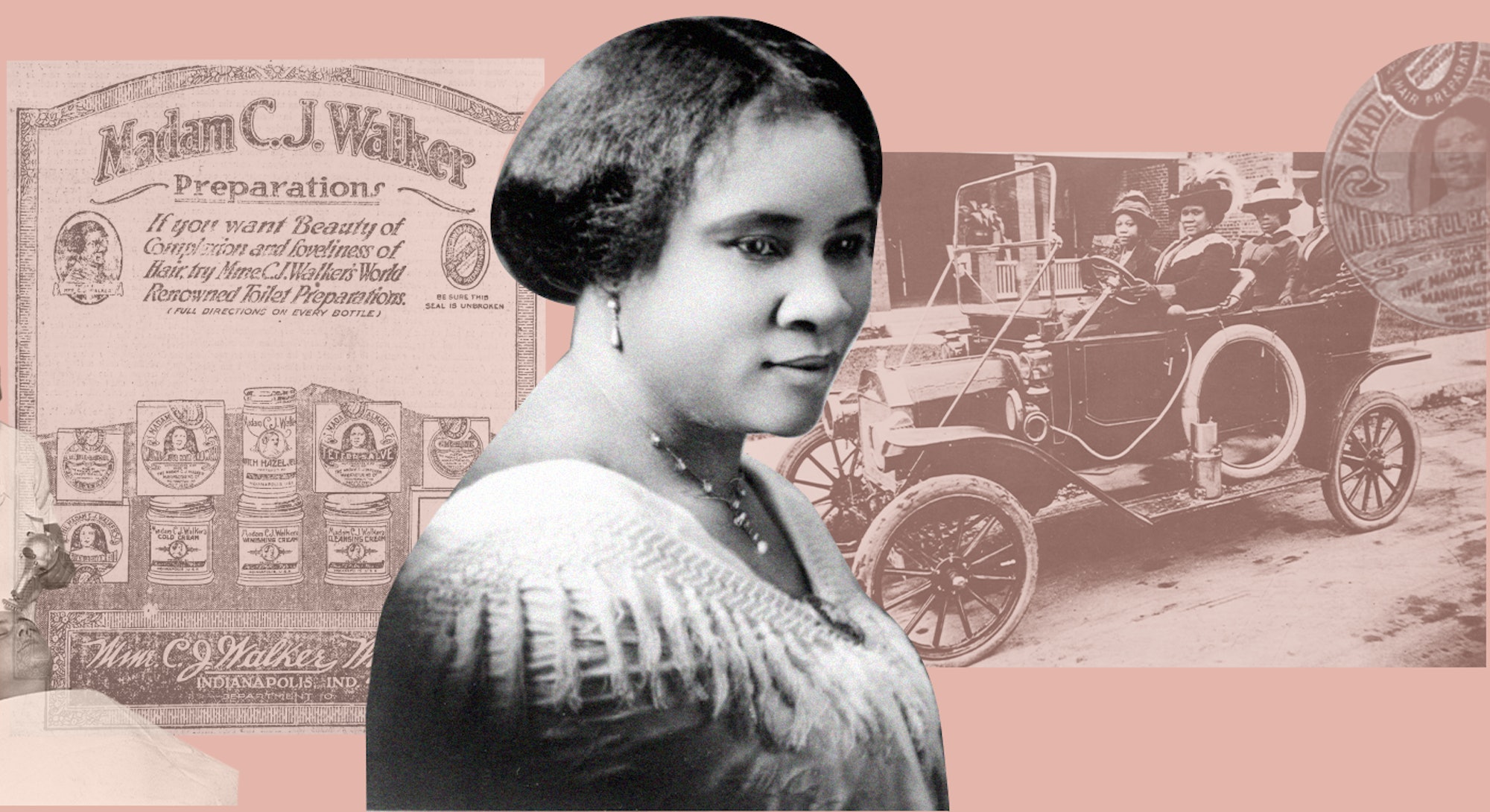 You wouldn’t be able to pop into a drugstore today and buy a SheaMoisture or Curl Theory product if it weren’t for the multimillion-dollar brand Madam C.J. Walker built. Born Sarah Breedlove, the daughter of sharecroppers, Walker incorporated Black hair care into the beauty industry more than a century ago. Her revolutionary sales agents marketed her products so successfully through their personal testimonials that Walker became the first American woman to achieve self-made-millionaire status. This rags-to-riches story was adapted into Netflix’s new limited series Self Made: Inspired by the Life of Madam C. J. Walker, starring Octavia Spencer — and according to Walker’s great-great-granddaughter, the word “inspired” is doing a lot of work in that title.

In the 1970s, A’Lelia Bundles’ journalism school adviser challenged her to unpack the legends surrounding her great-great-grandmother in a master’s paper. That kicked off years of archival research and interviews with family, friends, and employees of the Madam C.J Walker Manufacturing Company; her work informed the biography On Her Own Ground that is the basis for the Netflix adaptation.

Hollywood routinely creates composite or entirely new characters, scenes, and storylines for such projects, so Bundles spoke with Bustle about the challenges of bringing the life of an outsized historical figure like Walker to the screen. The following interview has been lightly edited and condensed for clarity.

What was your involvement in the book’s progression to the limited series?

AB: After the commercial success of untold stories about African Americans, like 12 Years A Slave, Selma, as well as #OscarsSoWhite (April Reign’s social media campaign to increase diversity in the Academy’s membership), there was a reactivation of interest in the life of Madam C.J. Walker. The production company that acquired and sold the project to Warner Bros. had a conversation with me that showed me they respected my research and that I would have involvement in the adaptation. After the sale, Octavia Spencer got involved in the project, but I was not included in early conversations about script development for the series. When the scripts were finished, I reviewed and contributed feedback to the head writer and showrunners. Some things were incorporated into the project, while others were not. [Editor’s note: Netflix declined to comment.]

Hollywood adaptations often revise Black stories in order to entice viewers to watch projects in their entirety, at the expense of the truth.

AB: Octavia Spencer does an incredible job of depicting Madam C.J. Walker as a woman of courage throughout her journey, from being a washerwoman in poverty to becoming a successful entrepreneur who empowers other women. That’s the big picture, but the devil is in the details. In the adaptation, some events are based on real incidents, some events are entirely fabricated, and some are not exactly portrayed in the way they happened.

One event in the series that comes to mind is the Booker T. Washington incident, where Walker goes up on stage in front of the National Negro Business League and interrupts him to secure financial investments to start up her factory. I really wish the series included the lines from her real-life speech where she says, “I promoted myself into the business of manufacturing hair goods and preparations.”

AB: I don't know why they didn't include it, either. I found that quote early on in my research, some time in the '80s, at Howard’s Moorland-Spingarn Library. I came across a master's thesis that a history student did, then I was able to go find the original speech. For me, that was the first time I had really seen Walker’s own words. It was just so incredibly powerful.

In the same scene, when Washington accuses Walker of encouraging Euro-centric beauty standards, she says, “I’m only here to make Black women feel beautiful.” I love that they included that because it's such a common thought that Walker made relaxers and the hot comb so that everybody could look like a white woman.

AB: Right. For me, if people can see this and then be motivated to dig a little bit more deeply and find the facts about Walker, that is the double-edged sword. I mean, Hollywood is going to tell a story. There are pressures that I know the showrunners and producers have, because they want people to watch. It's been an interesting journey for me in this way, as a journalist who really is fact-based in what I do. I know that this is not a documentary and I totally get that.

I would like to see a different kind of collaboration between the people who write the books and do the research and Hollywood. Now, I know this is not going to happen in every single case. But I just read Celeste Ng, who's doing a new series [Little Fires Everywhere] with Kerry Washington, that she was in the writer's room. Well, I was not in the writer's room. There's got to be some way for a conversation to happen with Black women, historians, who really know the history to say, "Well, what is it that we can do to help Hollywood have more fidelity to what actually happened?" And for the Hollywood folks to say to the historians, "Here are things that would help us tell the story."

I think The 1619 Project that came out of The New York Times last year was so beautiful. There is now this mainstream kind of hunger for Black stories, and then there's people like us, journalists, who are trying to make sure these are factually accurate depictions. Do you feel the adaptation did a good job at dispelling the myths about Walker?

AB: As I said, I think Octavia does a great job of showing Madam Walker’s strengths. There are things that I would have done differently. I would have emphasized Madam Walker's friendships with some of the women who mentored her: Jessie Batts Robinson, who was a teacher in her church and a leader in a national women's organization, and Alice Kelly, a former dean of girls at a Black boarding school in Kentucky who became her personal tutor and manager of her factory. I would have loved to have seen a really strong female friendship developed, and more emphasis on the role that other women played in developing the business. You get a hint of it when you see the National Association of Colored Women and some of her agents. She was great at picking leaders and letting them rise to the top. And I would have done more with her political involvement.

There’s no mention of Walker’s telegraph to President Woodrow Wilson, urging him to classify lynching as a federal crime, even though the legislation just passed in 2020. One thing I did enjoy was the brief mention of her daughter Lelia Walker's queerness, and I think that's something that we're starting to embrace in the histories of Black figures.

AB: Esther [Lelia’s love interest in the series] is an entirely made-up character. That’s not my favorite part of the adaptation, and not because of the queer component. It’s because none of those events happened. I think part of the inclusion of it is to say there was some kind of conflict with her mother over this aspect of her life.

The real-life conflict would have required two additional characters. In my new book, The Joy Goddess of Harlem: A'Lelia Walker and the Harlem Renaissance, I’m writing about the conflict that she and her mother had over her two boyfriends. Over a period of a year and a half, until Madam Walker's death in 1919, this was an ongoing source of tension between mother and daughter. Two boyfriends, both doctors, both handsome. One was a bad boy and one was a good guy. Of course, A'Lelia was more in love with the bad boy, with the swagger, and her mother was suspicious of him. She later married both of them.

Now, many of her very close friends were queer. She was very welcoming and her last relationship after three failed marriages was with a woman, a good friend of hers for many years. I think this was her soul mate, but I have no documentation, only circumstantial evidence. As I write The Joy Goddess of Harlem, I am trying to artfully develop that relationship. For me, that is a much different kind of thing than the relationship that is portrayed in the series.

The politics of Black hair are everywhere right now, from this Netflix adaptation, to the Oscar-winning short film Hair Love, and the CROWN ACT that addresses discrimination against Black women’s hair.

AB: I love that the CROWN Act is happening. Young people should not have to conform because they feel their hair is wrong based on our natural patterns of growth. For many people, Madam C.J. Walker has become, “She wanted to make Black women look white.” I push back against that, because her main goal was to address scalp infections, based on the lack of indoor plumbing in Black communities. She resented being called "the de-kink queen" by white publications. In 1918, she told a reporter, "Let me correct the erroneous impression that I claim to straighten hair. I grow hair. I want the great masses of my people to care more about their appearance." Her intention was not to make Black women look white; she was focused on basic grooming.

Throughout the Netflix adaptation, Walker emphasized the passing down of traditions through her children. As her descendant, what do you hope to pass down through your work archiving your family’s legacy?

AB: We have hundreds of untold stories about Black people, and specifically Black women. Amazing and inspiring stories that need to make it to the big screen, because they’re different from the usual narrative. They will educate people about the role of Black communities in the development of the nation and world. I hope that this series is successful enough for Hollywood to say, "OK, we need to make 10 more of these."