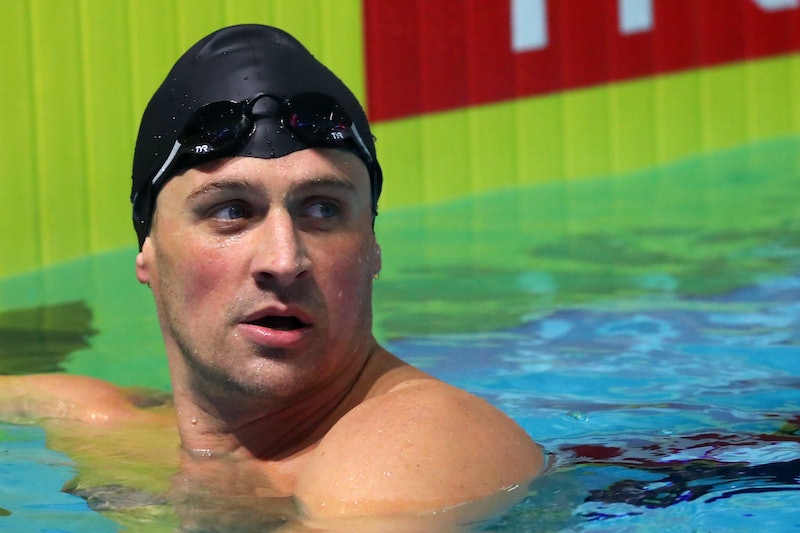 Lochte was originally hoping to qualify for the 2020 Olympics, but the coronavirus pandemic pushed the Games to 2021. Lochte will be 37 by then, competing against some swimmers half his age — and that's only if he qualifies. According to NBC Sports, Lochte currently ranks fifth in America in the 200 meter category that he competes in. At next year's trials, he'll have to come in first or second to qualify for the Games.

But Lochte has a positive attitude about it, telling ESPN that he is 100% in to go to Tokyo next year if he qualifies. "I still have a bunch of goals I want to accomplish in the sport," he said. "This is good. I get another full year of racing, working on my technique and my skills. I can get stronger." He added that he was disappointed about the postponement, but that it was just "another bump in the road" that he plans to overcome.

In addition to a 10-month suspension following the Rio scandal, Lochte was suspended again in 2018 for 14 months by the U.S. Anti-Doping Agency after receiving an IV infusion that he was not approved for, according to USA Today. That year, he also spent six weeks in rehab to address an alcohol dependency issue. But the last four years haven't been all bad news for Lochte. He and his now-wife Kayla Reid welcomed a baby boy named Caiden in 2017 and wed in 2018. Then, last summer, Kayla gave birth to the couple's daughter Liv.

"It's pretty obvious now, I’m 100% family,” Lochte told NBC Sports last year. "That party boy image that I used to have, I know it kind of messed me up, and it stuck with me, but that’s not me. I could care less about that lifestyle. My celebrations are picking up my son and my daughter and playing with them." He's even incorporated the kids into his workouts since his training pool has been closed in quarantine. "Right now we are doing a lot of bench presses with the kids, holding them and doing some squats and staying fit as much as possible," Lochte told Swimming World magazine.

If Lochte's training goes according to schedule and he qualifies for the Olympics next year, he'll be the oldest male Olympic male swimmer in U.S. history, per NBC Sports — Michael Phelps retired at 31. But as Lochte told ESPN, "Age is just a number."

More like this
Andy Cohen Apologized To Larsa Pippen After A 'RHOM' Season 5 Reunion Dust-Up
By Brad Witter
Hallmark’s The Way Home Is Like 'This Is Us' Meets 'Back To The Future'
By Grace Wehniainen
The 'New Amsterdam' Series Finale Opens An “Unexpected” Door To The Future
By Brad Witter
Love Is Blind’s Natalie Claims Shayne Signed Up For 'Perfect Match' While They Were “Still Together”
By Brad Witter
Get Even More From Bustle — Sign Up For The Newsletter
From hair trends to relationship advice, our daily newsletter has everything you need to sound like a person who’s on TikTok, even if you aren’t.