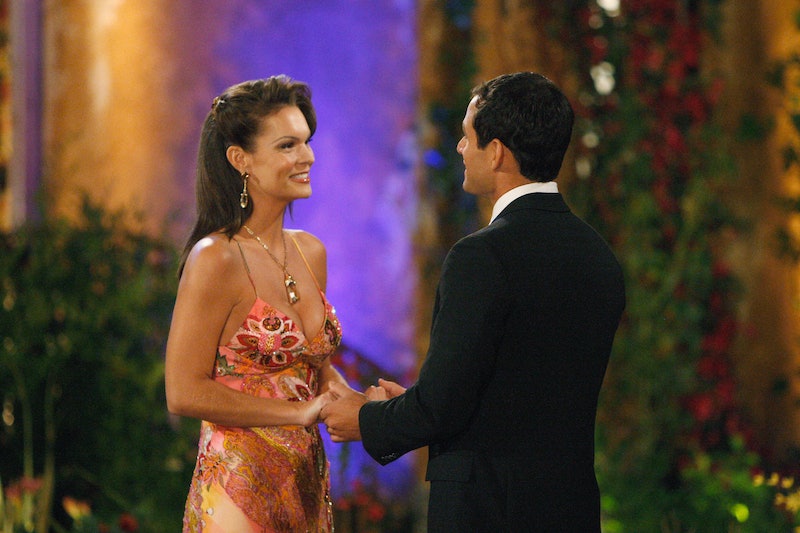 It's been 11 years since Stephanie Hogan appeared on Jason Mesnick's season of The Bachelor, which means that you may need a refresher before The Bachelor: The Greatest Seasons — Ever! revisits his run on Monday night. An early fan favorite, Stephanie was a medical marketing representative from Huntsville Alabama who lost her husband and brother-in-law in a plane crash. She was also a single mom to her daughter, Sophia, who was only 10 weeks old when the crash happened. Viewers liked Stephanie because she steered clear of the drama and tried to have as positive of an experience as possible.

"Stephanie, you were always above the fray," host Chris Harrison said during the Women Tell All episode, to which she replied, "I really try to see the positive in everybody. People have talked about me enough in my life, I choose not to participate in it."

Stephanie also had one of the most memorable Bachelor dates in the entire franchise. During her first one-on-one, Jason surprised Stephanie by flying her daughter to Los Angeles so they could all celebrate her fourth birthday together. According to AL.com, Jason even called the date one of his favorite moments from the season.

While chatting with People in 2009 after her elimination, Stephanie said that there was "no doubt" she would remain friends with Jason. "I had such a bond with Jason. He is an incredible man," she said. "Even though we didn’t have that physical connection or chemistry, I still think our friendship will remain strong. There are many avenues we could connect on like being single parents and having children the same age."

Nowadays, Stephanie appears to be flying under the radar. It's unclear if she's found love again or what she's doing due to her lack of a social media presence. Perhaps she'll pop up with an update on Greatest Seasons.