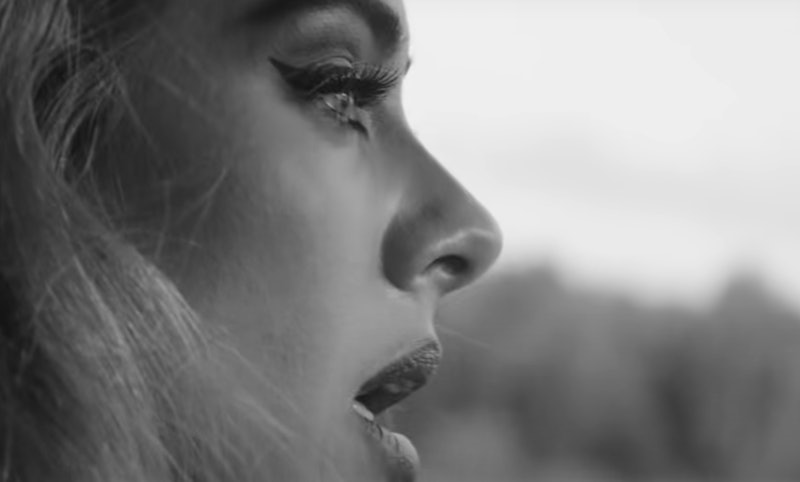 Drop everything because today is the day Adele finally released her new single “Easy On Me” from upcoming album (due to be released on November 19) 30. And while you may already have the song on repeat, here’s everything you need to know about its meaning, including the full lyrics.

Adele herself has spoken in depth about the meaning of her new album as a whole, and how it was written during “the most turbulent period” of her life as she navigated a divorce with ex-husband Simon Konecki. And “Easy On Me” seems to lead the charge with this messaging, as an ode to that period in her life.

The song has been described as a focus on the singer’s “fraught childhood, her lost marriage and the lessons learnt and unlearnt about family, love and abandonment along the way,” by British Vogue, while Time analyses the song in depth and confirms that it “reflects on the end of a relationship.” “She is vulnerable and introspective, tender with herself and ultimately at least a little bit hopeful,” writes Eloise Barry.

Adele has previously spoken about how she wishes the album as a whole to carry a message for her young song Angelo, who also went through her divorce with her. “I wanted to explain to him, through this record, when he’s in his twenties or thirties, who I am and why I voluntarily chose to dismantle his entire life in the pursuit of my own happiness,” she told British Vogue. “It made him really unhappy sometimes. And that’s a real wound for me that I don’t know if I’ll ever be able to heal.”

“I learned a lot of blistering home truths about myself along the way,” she revealed about writing the lyrics for the new songs on Instagram. “I’ve shed many layers but also wrapped myself in new ones. Discovered genuinely useful and wholesome mentalities to lead with, and I feel like I've finally found my feeling again. I'd go as far as to say that I've never felt more peaceful in my life. And so, I'm ready to release this album.”

“Easy On Me” has a distinct feel of hopefulness, along with an exploration of despair that the singer has clearly experienced throughout the past few tumultuous years in her personal life. Take a look at the full lyrics below to see what I mean:

There ain't no gold in this river

That I've been washing my hands in forever

I know there is hope in these waters

But I can't bring myself to swim

When I am drowning in the silence

Baby, let me in

Didn't get the chance to

I had no time to choose

There ain't room for things to change

When we are both so deeply stuck in our ways

I changеd who I was to put you both first

But now I give up

Didn't gеt the chance to

Had no time to choose

I had good intentions

And the highest hopes

But I know right now

It probably doesn't even show

Didn't get the chance to

Had no time to choose