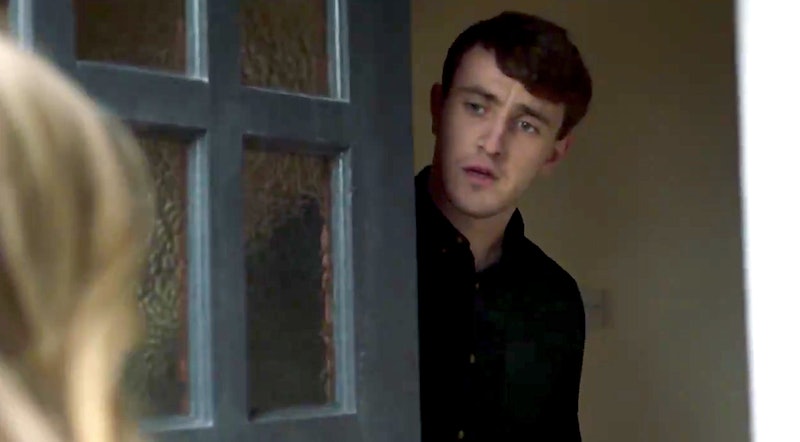 Thanks to his role in Normal People, Paul Mescal is quickly becoming one of the UK’s most sought-after actors. While he’ll forever be remembered as Sally Rooney's character Connell, the star is now featuring in a brand new drama — this time on Channel 5. Created by Lisa McGee (the genius behind Derry Girls) and Tobias Beer, this four-part psychological thriller sees Mescal play an important supporting role alongside the Emily Reid (Belgravia), Catherine Walker (Shetland), and Emmett Scanlan (Hollyoaks). But when is The Deceived going to air?

Well, I have good news: the four-part drama will begin airing tonight (August 3) at 9 p.m. on Channel 5. New episodes will air every night at the same time up until Thursday.

So, before you dig into the series, what else is there to know about the storyline and the actors featured?

The drama follows English student Ophelia (played by Reid) who falls in love with her lecturer Michael Callaghan (Scanlan) – with dire consequences. Their affair results in the death of Callaghan’s wife Roisin (Walker) in a house fire, but Ophelia “begins to suspect that she may actually be alive,” per Digital Spy. Mescal plays Ophelia's friend and local builder, Sean McKeough.

McGee gave more hints about the story in a trailer shared via her Twitter, revealing that Ophelia may be pregnant with Callaghan's child and that and she isn’t the only one he's has had an affair with. Rosin’s death serves as the catalyst for Ophelia, who decides to figure out the truth. If the trailer is anything to go by, it appears that Sean is doing all he can to stop Ophelia on her sinister quest, worried about her wellbeing. Is it just me or does that kind of concern give off some serious Connell vibes? All that's missing is the chain.

“We wanted to make a show that nods to classic thrillers but also make something really modern that speaks to a contemporary audience,” executive producer Charlie Hampton told the Daily Mail. “The Deceived is a psychological relationship thriller that will have the audience questioning everything and will hopefully leave them wanting more.”

More like this
6 'Happy Valley' Easter Eggs You May Have Missed
By Sophie McEvoy
Claire Foy Spoke Out About 'The Crown's Gender Pay Gap
By Sam Ramsden
Olivia Colman Stars In First-Look Trailer For BBC's 'Great Expectations'
By Sabah Hussain and Sam Ramsden
Twitter Simply Couldn’t Cope With The ‘Happy Valley’ Finale
By Sophie McEvoy
Get Even More From Bustle — Sign Up For The Newsletter
From hair trends to relationship advice, our daily newsletter has everything you need to sound like a person who’s on TikTok, even if you aren’t.