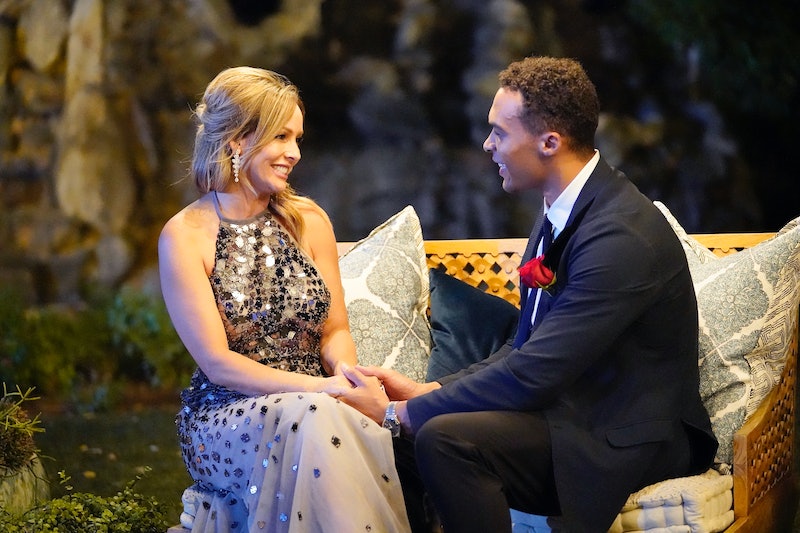 By now, we know a few things about Clare's Bachelorette season: she falls in love with Dale Moss (reportedly!), she quits the show after only two weeks to be with him (reportedly!), and Tayshia Adams replaces her as the show's lead (reportedly!). What we don't know is exactly when all of this happened. Here's everything we've culled from an internet deep dive about how all the drama plays out.

As seen during the Bachelorette Season 16 premiere, Harrison FaceTimed Clare to give her the good news. "Is this for real?" she tearfully asked the host.

The network made the big reveal on the March 2 episode of Good Morning America. "The most important thing is I want a man that will take off his armor," Clare said on the show. "I want a man who is strong, but is willing to take off the body armor, open himself up and be vulnerable, and I think that is some serious strength right there."

A Warner Bros. Television Group spokesperson announced the company would postpone filming its 70-plus series and pilots, including Season 16 of The Bachelorette, due to concerns over the coronavirus pandemic. "We were going to start filming in just a couple days," Clare later explained on The Bachelorette.

"We're going to start shooting your season of The Bachelorette in just a few days, and guys are already on their way," the host told Clare on a phone call that happened sometime in June, according to the Bachelorette premiere. The catch? Instead of the Bachelor mansion, Clare and her guys were headed to the La Quinta Resort & Spa near Palm Springs, California, where they'd all have to quarantine as they awaited the results of their coronavirus tests.

Though the exact start date is unclear, photos of Clare filming at La Quinta surfaced on July 20. Following night one of shooting, Clare reportedly only participated in two more rose ceremonies before quitting the show, according to longtime Bachelor blogger Reality Steve.

According to a Reddit post later shared by Reality Steve, production began having "problems" with Clare. She reportedly canceled all the events that were supposed to take place on July 25.

Reality Steve obtained a notice sent to local residents informing them that a brief firework display, which was originally scheduled for Aug. 1, would be happening on the resort where The Bachelorette was filming. Although there's yet to be any confirmation, this is when many believe Clare left the show and Tayshia replaced her as the lead.

According to a source for OK! magazine, ABC sent Clare and Dale to live in a private home until after her Bachelorette season. The insider claimed “it has been made perfectly clear that if either Clare or Dale want to be considered for Dancing With the Stars — which is the natural progression — or any other future with the network, they will do what they are told to do!"

More like this
‘The Ultimatum: Queer Love’ Is Officially On The Way
By Radhika Menon and Kadin Burnett
Here’s When You Can Expect More ‘Indian Matchmaking’
By Brad Witter
Clayton & Susie Broke Up, Citing "A Significant Amount Of Pain" After 'The Bachelor'
By Jordyn Tilchen
Molly-Mae Hague & Tommy Fury Celebrate Pregnancy Reveal In The Sweetest Way
By Sophie McEvoy and Sam Ramsden
Get Even More From Bustle — Sign Up For The Newsletter