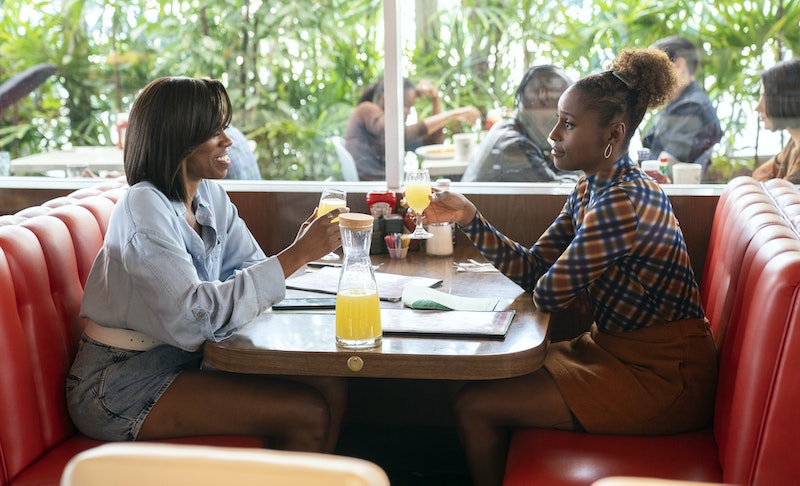 Update: HBO announced on Wednesday, Jan. 13 that Insecure will end with Season 5. “Issa has turned insecurity into an iconic form of comedy,” Amy Gravitt, HBO Programming's Executive Vice President, said in a press release. “The show is as incisive as it is heartfelt, and it has resonated strongly with its audience because of the deeply personal work that Issa, Prentice, Melina, the cast and the writers have put into it. This talented team has conceived a brilliant final season for Insecure and we look forward to having many more stories to tell with this singular group of collaborators.”

Earlier: Before its Season 4 finale on Sunday, June 14, Insecure has a lot of loose ends to tie up. Will Issa and Molly repair their friendship? Are their respective relationships with Andrew and Lawrence (or perhaps Nathan?) going to work out? Fortunately, fans can rest assured that Insecure will return for Season 5, so these characters have a bit more time to figure out their sh*t.

The HBO series was renewed on May 1, and Issa Rae told Variety that they are starting to write Season 5 in quarantine. "It feels really good to be back," the Insecure co-creator and star said. "My only social interaction right now is just the weird virtual writer's room. So that part is really exciting."

As of May 13, when the Variety interview came out, Rae and the other writers were unclear whether they're going to include any mention of the coronavirus pandemic in Season 5. This was, it's important to note, before the death of George Floyd and the subsequent Black Lives Matter protests swept the country.

"I already have fatigue of [the pandemic] because we're living it and I think that's my biggest worry is just, you know, I don't want the show to feel dated and obviously certain aspects will already feel dated by nature," Rae explained, continuing that they will probably "acknowledge [COVID-19] in the background."

One thing Rae said the writer's room doesn't want to ignore is the fact that her "favorite Black businesses [in L.A.] are being impacted and having to close shop, and so we don't want to feel tone-deaf in ignoring it. We've always taken pride in representing the city as is." Since that Variety article was published, The Hollywood Reporter announced that Rae was helping launch a new Inglewood branch of the Black-owned Hilltop Coffee + Kitchen. "It's so important to invest in Black communities because we were denied ownership for so long," she told the outlet. "Ownership allows us to secure legacies for our family and our communities."

As for when Season 5 would premiere, it's still up in the air. However, Rae estimated that they would start filming in six months, per Variety, which would translate to beginning production in November 2020. "Obviously we have a schedule where we're supposed to shoot, but who knows if we're going to meet that," she told Variety. "Who knows if we're even going to be able to come out next year, so there's just so many 'if' factors."

There was a year and a half gap between Seasons 3 and 4, so if the Insecure star continues being involved in other projects (like her recent films The Photograph and Lovebirds), fans may be in for a bit of a wait — especially given the pandemic.

Hopefully, fans will get some semblance of closure for Molly and Issa — if not in the Season 4 finale, then perhaps next season. "When you're used to being friends with someone for so long, so much of your identity gets wrapped up in that and I think that exists for relationships in general," Rae told Variety. "I think both of them needs to take a step back and and kind of examine 'how did we get here? And who am I without this person?'"

This article was originally published on June 15, 2020