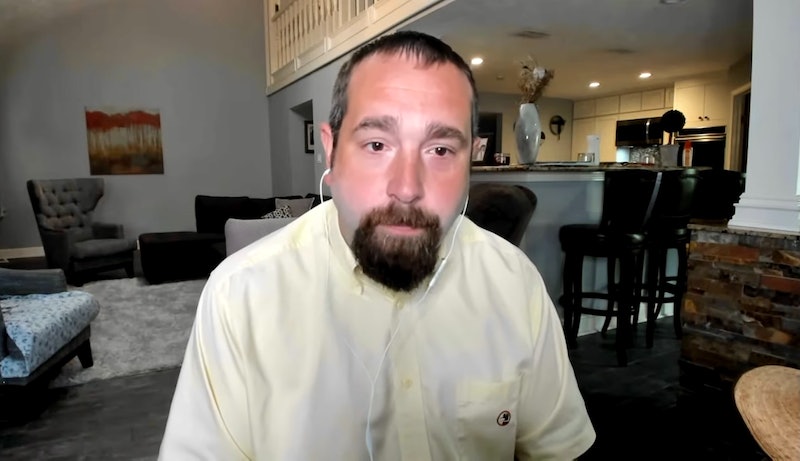 Catfish's Dec. 22 episode was sort of one big reality TV crossover. It followed the relationship between Michael "Cowboy" Ellis, who competed on Big Brother in 2004, and Julia, a woman he fell for online. But when fellow reality star Russell Hantz — who competed on Survivor three times — discovered that Julia was the same woman he'd had a "flirtatious" online relationship with, he became convinced she was just a reality TV fan catfishing his close pal. So he called upon Nev and Camie.

By the time the two stepped in, Michael had been talking to Julia for about four months. She only wanted to text and always had an excuse not to jump on any video calls. But Michael — who's already a father of three — was nonetheless ready to uproot his life and had even discussed having a child with her.

As the 39-year-old explained to Nev and Kamie over Zoom, he was going through a divorce when Julia, 28, came into his life in July, about two weeks after he and his wife had separated. She admitted she was a Big Brother superfan, and their conversations escalated from casual to discussing their futures fairly quickly. He'd even considered relocating to Myrtle Beach, South Carolina, where Julia said she lived.

After some sleuthing, Nev and Kamie suspected that Julia's sister Christin was actually behind the account. Another piece of bad news: fellow Big Brother alum James Huling also claimed he'd been in contact with Julia in recent weeks, adding that she'd sent him explicit photos. Michael was heartbroken, but the situation took a turn when Julia agreed to hop on a Zoom.

After initially covering her camera, Julia revealed she is indeed who she said she was. She just hadn't been entirely truthful about her sexuality (she'd dated some women in the past) and didn't want to disappoint Michael. She also admitted that it was difficult for her to be vulnerable and open up, describing a past incident during which she was sexually assaulted. The conversation concluded with Michael and Julia both looking forward to meeting to see where their relationship went. However, a "recent COVID spike" delayed those plans, according to the post-episode catch-up.

Michael tweeted another update on Dec. 18, explaining that he and his wife are still legally married but have been separated for a while. He asserted that she was his best friend, they have a civil relationship, and he "did not cheat on" her. The Big Brother alum also addressed reports that he was arrested for "beating up" his son, claiming he was released with no charges and that they are "doing well and are close." (A Texas Fox News affiliate reported in February 2019 that Michael, a city council candidate, had been arrested following a domestic physical altercation with his son. He claimed self-defense at the time, per the outlet.)

As for Julia, her Instagram account is set to private, and there are very few public posts on her Facebook page. The most recent public post from Oct. 31 is a photo of her and friends dressed up in Austin Powers Halloween costumes.

Michael did share a photo taken from a balcony overlooking a beach on Dec. 21. But as for whether or not it was taken in Julia's hometown of Myrtle Beach — or even if they still intend to meet — he promised to give an update on Russell's YouTube show after the episode airs.