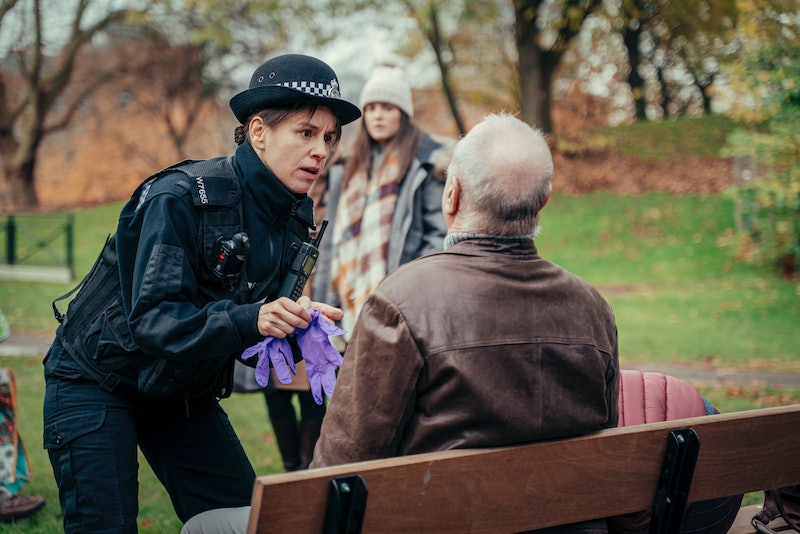 Starting Oct. 1, AMC's new streaming service AMC+ will air the BBC miniseries The Salisbury Poisonings. The show is based on the 2018 Novichok nerve agent attack in Salisbury, England, during which former Russian military intelligence officer and MI6 double agent Sergei Skripal and his daughter Yulia Skripal (played by Wayne Swann and Jill Winternitz in the show) were poisoned.

For those not familiar with the case (read: American audiences), 33-year-old Yulia and 66-year-old Sergei were found unconscious on a public bench at a local shopping center on March 4, 2018, per NPR. They were admitted to the hospital, where it was discovered they'd been poisoned with Novichok, a lethal chemical developed during the Cold War that's so deadly, just a half a teaspoon can kill 20,000 people. Eventually, two Russian nationals were suspected for the attempted murder.

The Skripals, meanwhile, miraculously survived the attack. Yulia was in a coma for 20 days and was discharged from the hospital in early April 2018, while her father was released a week earlier. Yulia spoke about their poisonings for the first time during an interview with Reuters in May 2018.

"We are so lucky to have both survived this attempted assassination. Our recovery has been slow and extremely painful," she said from a secret location in London while under the protection of the British state. (She gave her interview in Russian, but also provided a written English statement.) "As I try to come to terms with the devastating changes thrust upon me both physically and emotionally, I take one day at a time and want to help care for my dad 'til his full recovery. In the longer term I hope to return home to my country."

According to a June report from The Sunday Times, Yulia and Sergei lived "for more than a year in an MI6 safe house" after the attack before moving to New Zealand. A senior government source with knowledge of the case told the outlet that the father and daughter were given new identities. The Sunday Times also reported (via Digital Spy) that Sergei and Yulia's former neighbors Ross and Mo Cassidy received a 2019 Christmas card from the family. "It's nice to know they are thinking of us," Ross told the publication. "But I don't expect we'll ever see them again."

More like this
Everything To Know About The 'Daisy Jones & The Six' TV Series
By Maxine Harrison and Brad Witter
'Magpie Murders' S2 Will Include A *Major* Shake-Up
By Sophie McEvoy
The Song At The End Of 'The Last Of Us' Ep 1 Has A Deeper Meaning
By Sophie McEvoy
Yes, 'The Price Of Glee' Is Available To Watch In The UK
By Catharina Cheung
Get Even More From Bustle — Sign Up For The Newsletter
From hair trends to relationship advice, our daily newsletter has everything you need to sound like a person who’s on TikTok, even if you aren’t.