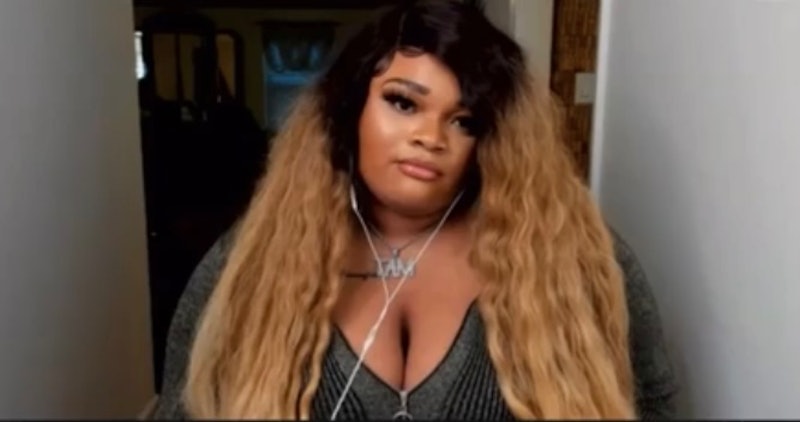 Despite talking online for well over a year, Catfish subjects Tam and Jamena had never had any face-to-face interactions before Nev and Kamie were called in. As Tam, 27, explained in the Jan. 12 episode, she and Jamena met on Plenty of Fish in August 2018 and "instantly became soul mates," often having eight to 10-hour conversations. Talking to Jamena made Tam feel safe, as she hadn't full embraced her sexuality.

Of course, there were several red flags. Jamena claimed to live about 45 minutes away from Tam, who lives in Houston, but ghosted her multiple times during attempts to meet up and avoided doing FaceTime calls. After six months of runaround, Tam finally had enough and dumped Jamena, who subsequently blocked her. Later, Tam started to miss Jamena and enlisted her older sister Tay to help get them back in contact. Things seemed to be going well — until she got a threatening text message from someone claiming to be Jamena's girlfriend.

To almost no one's surprise, Jamena was not exactly who she said she was and actually lived in Milwaukee, though she does go by the nickname Mena. The threatening text had come from a friend, and she'd had a fake dating page for an astounding 10 years. While talking to Nev, Kamie, and Tam over Zoom, however, Tam insisted her feelings for Tam were genuine and that she was over being a catfish. (Worth noting: Mena never appeared onscreen without a surgical mask covering her mouth, even though Nev told her you can't get coronavirus through a computer screen.)

A hurt Tam seemed to be in agreement when Kamie called it a "f*cked up situation," while Nev said Mena was "bad news." Tam told Mena that she felt taken advantage of and needed to "chill" on dating because "this sh*t is not what's up." After filming, Mena continued calling Tam to declare her love, and Tam eventually answered her calls. However, she said the onus is on Mena to prove her feelings are real by her actions, not her words. If she can do that, perhaps there's hope for the couple.

Catfish never revealed Mena's real name, though the show did explain that she eventually shared that information with Tam. Tam is also difficult to find on social media, so viewers will have to wait until the two are ready to share an update.

More like this
Mack & Domynique Reportedly Had An "Epic" Breakup On 'Married At First Sight'
By Brad Witter
All The Clues Clint & Gina Aren’t Still Together After 'MAFS' Season 16
By Brad Witter
A Guide To All Of Zach Shallcross' 'Bachelor' Filming Locations
By Brad Witter
Joey Essex Is Rumoured To Be Dating A 'Love Island' Favourite
By Sam Ramsden
Get Even More From Bustle — Sign Up For The Newsletter
From hair trends to relationship advice, our daily newsletter has everything you need to sound like a person who’s on TikTok, even if you aren’t.