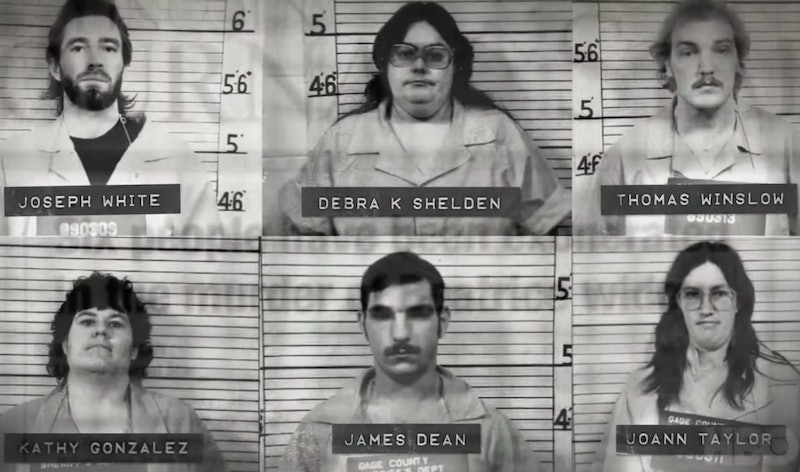 The “Beatrice Six,” a group of Nebraska outcasts wrongfully convicted of the brutal February 1985 rape and murder of 68-year-old grandmother Helen Wilson, are at the center of HBO’s six-part documentary series, Mind Over Murder. What makes the case particularly perplexing is that five members of the “Beatrice Six” — Joseph White, Thomas Winslow, Ada Taylor, Debra Shelden, James Dean, and Kathy Gonzalez — confessed to the crimes despite having no memory of actually committing them.

Investigators first set their sights on the group after a 17-year-old informant claimed that Taylor had confessed the crime to her. The group’s eventual false confessions to authorities partially stemmed from police psychologist Wayne Price assuring them that their so-called repressed memories of the crimes would return in a dream or deep thought in the future. “I block bad things out. I always have,” Taylor said, parroting Price in a 1989 police interview, per The Washington Post. Meanwhile, other advocates pointed to practices of threatening murder suspects with the death penalty, as well as the fact the then-suspects were reportedly shown crime scene photos and fed information of which they had no existing knowledge.

In late 1989, White was found guilty of first-degree murder, with the other five individuals admitting to aiding in the alleged crimes. After collectively serving 77 years in prison, law enforcement reviewed the evidence again in 2008, and new DNA testing conclusively identified Bruce Allen Smith as Wilson’s lone killer. The “Beatrice Six” was exonerated in early 2009, ultimately raising questions about the reliability of confessions and memory in criminal cases.

In Mind Over Murder, four of the five living “Beatrice Six” members share more details about their case. Here’s what they’re doing now.

After serving more than 18 years of a life prison sentence, White was released from prison in October 2008 and officially exonerated in early 2009. After long maintaining his innocence, he spearheaded a civil lawsuit that year, but he never personally saw the total award. In 2011, White died in a work-related construction accident in Alabama at 48 years old. Though he received $25,000 in compensation from the state of Nebraska before his death, his estate received an additional $475,000 afterward. In July 2016, a jury awarded his estate an additional $7.3 million, a decision that the county unsuccessfully appealed all the way to the United States Supreme Court in 2019. “My main objective in all of it was to see that his name was cleared and that the folks that put him through all that was held up to the light for the world to see,” his mother, Lois, told the Lincoln Journal Star following the Supreme Court’s 2019 decision.

Winslow, who pleaded no contest to second-degree murder, was sentenced to 50 years in prison. Following his release, he received $180,000 in compensation for his wrongful conviction, followed by another $7.3 million in the 2016 decision. “Part of the reason we pushed through the emotions was because of Joe White,” Winslow, who had been sexually assaulted in prison, told The New Yorker of the lawsuit in 2017. “He gives us the extra strength. He was stronger than us all the way around.” Since then, Winslow was last reported to be living in Oklahoma and has remained out of the spotlight.

Sentenced to 10 to 40 years for aiding and abetting second-degree murder, Taylor moved to a halfway house in Omaha after her release and struggled to convince herself that she had never met Wilson. After the civil trial awarded her $7.3 million, Taylor moved back to North Carolina. She claims her family, including her daughter Rachel, still viewed her as a murderer, despite her exoneration. She also earned income from disability benefits, listing Stockholm syndrome as one of her medical conditions, per The New Yorker.

In exchange for testifying against White, Shelden, Wilson’s great-niece, received a 10-year sentence and was released after serving about four and a half years. Even after her release, she continued to believe she was involved in the murder. “I still think that I was guilty because I was there,” she said in 2008, per the Lincoln Journal Star. Regardless, she reached an agreement for a $300,000 settlement with the state in 2014, followed by a $1.8 million award two years later. At the time of the first monetary award, Shelden was reportedly living in a vehicle near Lincoln, Nebraska but has since kept a low profile.

Also agreeing to testify against White, Dean received a 10-year prison sentence, of which he served about five years. After receiving $300,000 for his wrongful conviction, he also attended the later civil trial with his fiancée, Lydia Buckley. The jury ultimately awarded him about $2 million, and he later apologized to White for lying on the witness stand. Though his current whereabouts are unclear, he was previously reported to be working as a truck driver in Salinas, Kansas.

Following her guilty plea to aiding and abetting second-degree murder, Gonzalez was sentenced to 10 years in prison and released after about five years. Once she served her time, she reportedly moved to York, Nebraska, where she worked as a grocery store cashier. For her part, Gonzalez received $350,000, followed by just over $2 million from the civil suit. In a 2019 post-trial interview, she expressed hope that the money would help her buy a car, fix her teeth, and install an air-conditioner in her home.

More like this
It Took Investigators 23 Years To Correctly Identify Helen Wilson's Real Killer
By Brad Witter
'Sherwood’s Filming Locations Hold Deeper Meaning
By Rachel Mantock
This Michigan Couple Really Won $27 Million After Finding A Lottery Loophole
By Brad Witter
Is Ryan J. Vallee From Web of Make Believe Still In Prison?
By Kadin Burnett
Get Even More From Bustle — Sign Up For The Newsletter