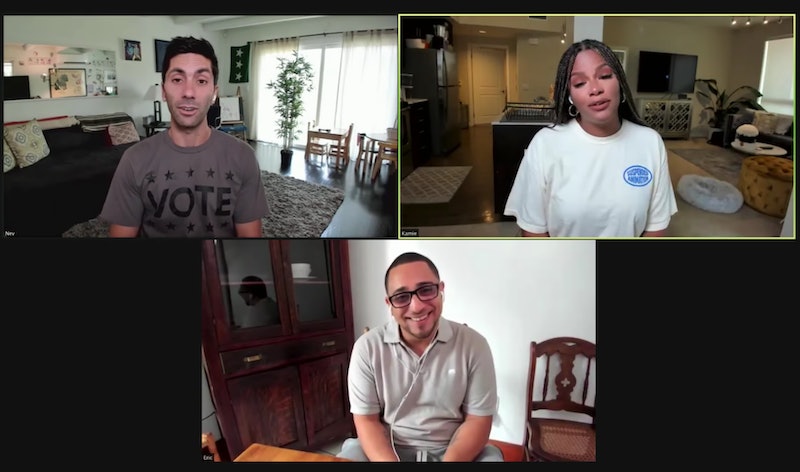 As a full-time single dad to a 10-year-old, Eric from Catfish didn't have a lot of time to date. Add on the coronavirus pandemic, and his odds of finding love were even lower. That's why his spirits were lifted when Lianna — a 24-year-old hairstylist — messaged him on Facebook. The two connected instantly and Eric couldn't help but imagine their future together.

He quickly learned that they both lived in Buffalo, New York, so meeting shouldn't have been a problem... but it was. Lianna ghosted him on three separate occasions, going as far as to say she was minutes from his house before disappearing and blocking his phone number. After a while, she'd reach back out and apologize, and the cycle would begin again.

Eric recruited Nev and Kamie for help because he'd had enough — and because things were getting weird. He'd blocked Lianna after she ghosted him and started talking to a suggested Facebook friend, Maria, who immediately revealed that she and Lianna were friends. Eventually, the three of them planned a meetup, and the same disappearing act went down again.

In their investigation, Nev and Kamie found striking similarities between the Lianna and Maria accounts — most of the friends were men, and most comments on the pages were flirtatiously written by men. They figured Lianna and Maria were the same person, and they were right.

After Nev texted Eric's number for Lianna to call her out, she hesitantly joined their Zoom meeting to reveal herself as Tracey, a 42-year-old woman from New Hampshire. She admitted to creating both accounts at the start of the pandemic because she was lonely and insecure. And though Eric was rightfully upset and embarrassed, he expressed sympathy and forgiveness and was happy to move on.

While on the show, Tracey publicly apologized for lying on her fake profiles and has since deleted them. She may have also deleted her personal page, because the link provided to Nev and Kamie was deactivated when they tried to open it on the show. Eric, on the other hand, is likely still active on the platform but his profile is difficult to locate. According to his Catfish follow-up, he wants to wait a while before trying online dating again.

More like this
‘The Ultimatum: Queer Love’ Is Officially On The Way
By Radhika Menon and Kadin Burnett
Here’s When You Can Expect More ‘Indian Matchmaking’
By Brad Witter
Here’s What 'Sister Wives’ Star Christine Brown Has Been Up To Since Leaving Kody
By Grace Wehniainen
Here's Exactly When Rachel & Tino's Fight Happened After 'The Bachelorette'
By Grace Wehniainen
Get Even More From Bustle — Sign Up For The Newsletter