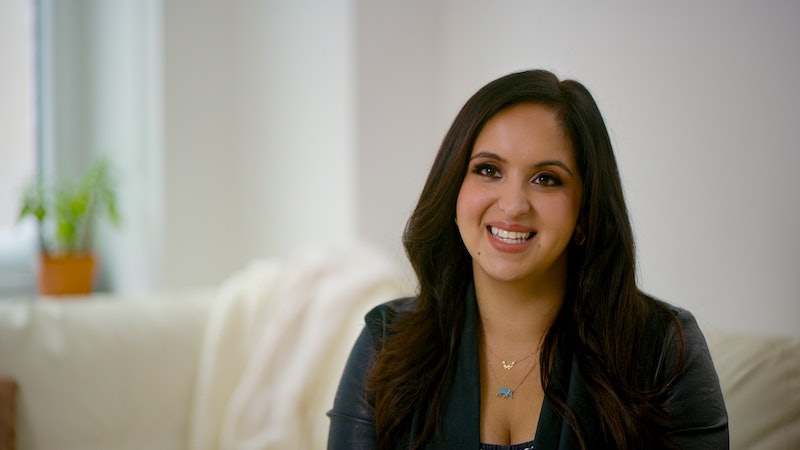 Indian Matchmaking’s Sima Taparia is back to work with a new season of helping millennial singles from across the globe find their true match. Although, in Season 2, she will have one less client to worry about. Aparna Shewakramani returns for the second season of the Netflix reality show, still looking for love, only this time on her own.

At the end of Season 1, Aparna bonded with Jay Wadhwani, one of Sima’s matches. Despite seeming like it was a promising relationship, the two remained only friends. Aparna spoke with Entertainment Tonight Canada back in April about her and Jay’s current relationship. “We did not ever start any relationship together… The men I went on dates with are who I really call my friends today,” she said. “And for me, that’s so special because we got to walk away with these friendships, and that’s priceless.”

In Season 2, Aparna decided to take a stronger hold on her romantic destiny. The Texan attorney decided to leave Houston in September 2021 and move to New York City, where the dating pool is larger. Aparna commemorated her big move by posting a photo of herself along the Houston skyline as a farewell. In the post, she goes on to talk about her desire to let go of the past and make more room for herself, specifically when it comes to clothing. “So if you’re holding onto physical items that represent a mental heaviness, try donating them to a place where those *things* can lead a new life,” she said. “You’ll be surprised when you’re the one living that new life after it’s gone too!”

By the end of Indian Matchmaking Season 2, she did voice that she had some misgivings about her move to New York during a heart-to-heart with her mom. It left fans wondering if Aparna would move back to Houston after struggling to make romantic connections in New York. But if her recent project and social media are any indications, it seems like she’s living her best life.

Since filming, she’s been hard at work promoting her book, She's Unlikeable: And Other Lies That Bring Women Down, which dropped in March 2022. The book chronicles Aparna’s journey through self-discovery and personal acceptance. “And to everyone who ever hated, despised, or detested me due to my portrayal on a television show. Thank you,” she writes in the book. “You are the very reason I continue to speak up for ambitious, driven women who want love but aren’t willing to settle for anything less than the partner they believe they deserve. You are the reason I live my truth every single day.”

She celebrated Indian Matchmaking’s return with a post dedicated to her cousin Avinash, who appeared on the show. And in a funny twist, it also looks like Aparna has been trying her own hand at matchmaking. On August 10, she posted a partnership with Juggernaut, a South Asian-centric magazine based in New York. Anyone interested can submit an application to Aparna, and for one week, she’ll do her best to match any two applicants together. Perhaps, she and Sima could team up for Season 3.

More like this
Here’s When You Can Expect More ‘Indian Matchmaking’
By Brad Witter
What’s New On Netflix: Ana De Armas’ 'Blonde' & A Nick Kroll Special
By Arya Roshanian
Here's How To Apply For 'Love Is Blind,' No Matter Where You Live In The US
By Grace Wehniainen
‘The Ultimatum: Queer Love’ Is Officially On The Way
By Radhika Menon and Kadin Burnett
Get Even More From Bustle — Sign Up For The Newsletter