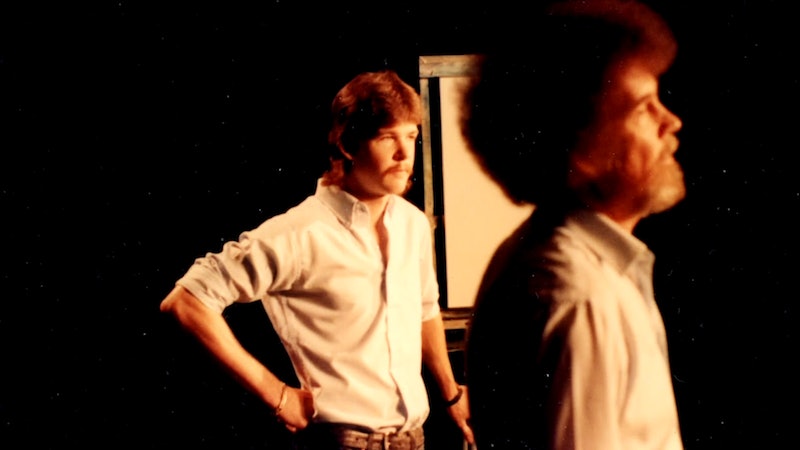 Netflix’s new investigative documentary Bob Ross: Happy Accidents, Betrayal & Greed covers the life and legacy of Bob Ross, particularly the legal dispute over his name and likeness. When the iconic painter died in 1995 after over a decade of hosting The Joy of Painting, he wanted his son, Robert Stephen Ross, who goes by Steve, to continue on as his successor. However, Bob Ross Inc. (BRI), independently managed by Annette and Walt Kowalski (and now their daughter Joan), owns the Ross name, brand, and paintings. In the documentary, Steve goes into detail about what he sees as a betrayal of his father’s intended legacy. (Annette and Walt Kowalski do not appear or respond to his claims.) But he continues to work as an artist — more prolifically now in the wake of a settlement between him and BRI. So what happened to him after his father died, and what is he doing now?

Steve Ross is a painter and teacher like his father.

Steve showed up early on in The Joy of Painting and continued to make appearances during the series. In introducing his son in the below video, Bob calls Steve a teacher who’s been an avid painter his whole adult life and sold his first painting when he was 12. Steve says he thinks there’s “nothing better in the world” than being a painting instructor. He clearly has the same style as his father — and the same soothing, soporific voice.

But Steve once resisted taking on his father’s mantle as successor, which is something his father deeply and vocally wanted. “As kids, we all want to defy our parents and hang out with our friends. But as we get older, we begin to understand that our parents are pushing us to be greater than themselves because they seek the best for us,” Steve recently explained to Vanity Fair.

Steve Ross spent years out of the spotlight and even “gave up painting for a time.”

Describing his dad to Vanity Fair as “an artist, a man of such integrity, who I deeply miss,” he added that he “had lost hope in the world and the decency of people” and “gave up painting for a time” after losing him and amid the intellectual property rights dispute. Sinking into a depression, he struggled to paint and teach, per The Daily Beast. “I didn’t realize that people missed me or wanted to have me do this again,” he told the outlet in May. But now he’s come back to the art and teaching. “Painting is something in my blood,” he told Vanity Fair.

Steve Ross now paints and teaches but does not manage his father’s brand.

As depicted in the documentary and in articles on the subject, BRI made attempts to get Bob to sign over his work and future profits off of his name and likeness. There was a bitter battle between Bob and the Kowalskis before his death, and he attempted to sign his rights over to both his half-brother Jimmie and Steve in his will. BRI engaged in multiple lawsuits afterward over the rights — and allegedly threatened to sue Steve. Speaking to The Daily Beast in May, he said he received a phone call from Annette two days after Bob’s death in 1995, in which she told him creating Bob Ross products “related to art or painting” were off-limits.

“You can never ever make those, distribute those, create a business around those — nothing,” he claims she said. “But if you would like you can do anything not painting- or art-related that you want. You can do Bob Ross pickles, Bob Ross shoes, Bob Ross whatever. But you cannot put the Ross name on a painting- or art-related product, period — ever — for the rest of your life.”

Steve says in the documentary that he has never seen any of the profits BRI has made; it wasn’t until after years of seclusion and depression that he decided to take legal action against the company. He sued but ultimately lost in 2018, as the judge considered Bob to have already given BRI his intellectual property rights while he was alive. In an ensuing settlement, however, Steve was able to move forward to build a business using his name. Afterward, he said he felt energized. Steve still hosts workshops and demonstrations and says the outpouring of support he’s received has been immense. In speaking to Netflix, he says he’s also bringing to light what happened after his father’s death.

“I’ve been wanting to get this story out for all these years,” Steve says in the trailer.