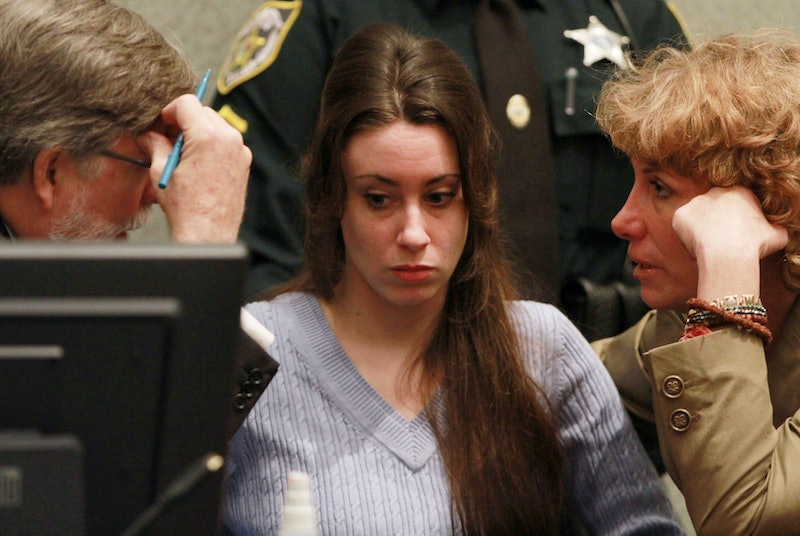 The first episode of Lifetime’s new docuseries Cellmate Secrets will offer a new look at the case of Casey Anthony, a young woman accused and eventually acquitted of the 2008 murder of her two-year-old daughter Caylee. Her infamous 2011 trial captured the attention of the entire nation, and the subsequent media frenzy led to her being known as “the most hated mom in America.” But despite facing charges including murder, aggravated manslaughter, and child abuse, Anthony was only convicted of providing false information to law enforcement. She was sentenced to four years in jail, one for each of the four false statements charges, but had already served three and was credited for good behavior. She was released after 10 days.

Cellmate Secrets promises to reveal “new insights and information as former friends, guards, cellmates and lovers give first-hand accounts of their time with famed felons and defendants.” One of the people interviewed about Anthony in the show is her former cellmate Robyn Adams, who shared a cell with Anthony in 2008. In a clip from the Lifetime series, Adams says she was with Anthony when she got the news that Caylee’s body had been found and that she believed Anthony’s “hysterical” reaction was genuine.

In addition to its episode focused on Casey Anthony, the six-episode docuseries will also reportedly explore the story of Joyce Mitchell, a woman who helped two people escape from a New York prison, as well as those of convicted murderers Drew Peterson, Chris Watts, Susan Smith, and Shayna Hubers.

Although Casey Anthony initially faced a lot of harassment and public scrutiny in the years immediately following her acquittal, she has since been able to create a quiet life for herself in South Florida, People reported in 2017. At the time of the People report, Anthony was working as a legal investigator for Pat McKenna, a private investigator who worked on her case. (Anthony was also reportedly living with McKenna, but the nature of their relationship has never been made clear.) Toward the end of 2020, Anthony filed documentation to start a private investigation firm in South Florida called Case Research & Consulting Services, which is based out of a property owned by McKenna.

Casey has been back in the news recently after an incident at a Florida bar in late May where she and another woman got into a yelling match over an ex-boyfriend they had been dating at the same time. Anthony called 911 after the verbal fight ended with the other woman reportedly splashing a drink in her face, but declined to file a restraining order or press charges.

This article was originally published on November 19, 2015