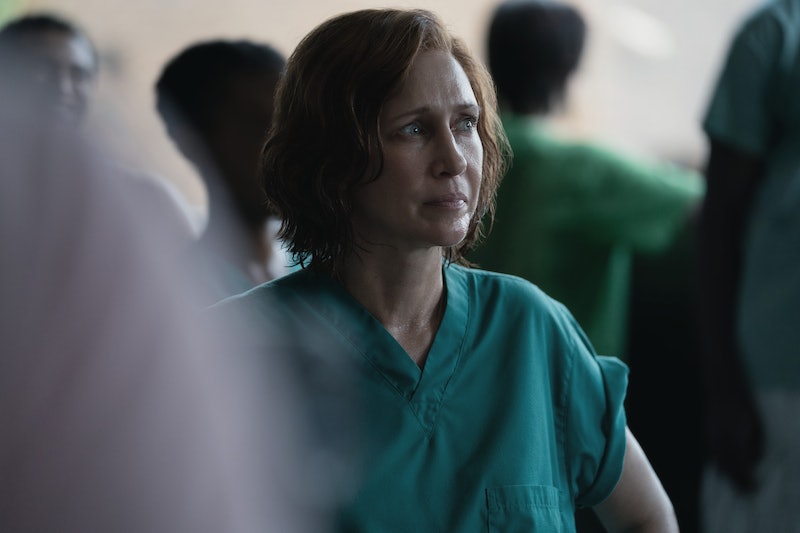 In the aftermath of Hurricane Katrina, Dr. Anna Pou was one of the New Orleans medical professionals in the eye of the storm. Adapted from journalist Sheri Fink’s book of the same name, Five Days at Memorial revisits the actual events that forced Dr. Pou (played Vera Farmiga in the Apple TV+ series) and her colleagues to make life-or-death decisions that would follow them for years to come. “If you were given the choice between comforting a patient, possibly quickening his death, or abandoning patients to suffer a slow death, what would you choose to do?” actor W. Earl Brown (as the real-life Dr. Ewing Cook) asks in a voiceover from the Five Days at Memorial trailer.

That question is exactly what Dr. Pou grappled with after the Category 5 hurricane made landfall on August 29, 2005. As floodwaters began invading Memorial Medical Center, which lost power after backup generators failed, temperatures soared to over 100 degrees. Meanwhile, there was no organized rescue plan in place for the Memorial patients, and many were reportedly too ill to evacuate anyway, particularly under the conditions. Ultimately, Dr. Pou and a small group of doctors decided to designate the sickest patients, especially those with do not resuscitate orders, as the final evacuees.

Once it was deemed safe to do so, the bodies of 45 patients were recovered from Memorial Medical Center’s makeshift morgue, more than a week later, per The Washington Post. The unusually high number of deaths sparked a months-long investigation, and, in July 2006, Louisiana Department of Justice agents arrested Dr. Pou, along with nurses Cheri Landry and Lori Budo, on second-degree murder charges in connection with the deaths of four of those patients. According to Louisiana attorney general Charles Foti, the women had allegedly committed murder by injecting patients with a combination of painkillers and sedatives to hasten their deaths.

Though the head and neck surgeon who specializes in treating cancer patients didn’t deny administering the drugs, she insisted that her intent was never to euthanize any patients. “I want everybody to know that I am not a murderer, that we are not murderers,” she told 60 Minutes correspondent Morley Safer in a September 2006 interview. Explaining that she personally does “not believe in euthanasia,” Dr. Pou added. “However, what I do believe in is comfort care. And that means that we ensure that they do not suffer pain. ... My role is to help them through their pain.”

Ultimately, the surgeon told Safer that she didn’t believe she “could have done anything more,” as she had “worked almost around the clock running up and down the stairs” in the dark, sweltering hospital: “I did the best I could under these dreadful conditions that I did not create, but were created by the fact that we were abandoned.”

On July 24, 2007, the grand jury decided not to indict Dr. Pou, clearing her and the nurses of all criminal charges. Two years later, the State of Louisiana also agreed to pay her legal fees, amounting to about $450,000. After overcoming the prospect of never practicing medicine again, Pou — who had been facing a maximum life sentence — returned to her work, in addition to taking on various speaking engagements and advocating for legislation to protect doctors in similar situations from most civil lawsuits.

As of Five Days at Memorial’s August 2022 premiere, Dr. Pou was working as a head and neck oncologist at a cancer center in Covington, Louisiana. She remains an active member of the medical community as a board-certified diplomate of the American Board of Otolaryngology and a fellow of the American College of Surgeons. The Louisiana State University School of Medicine graduate and faculty member has authored more than 40 publications, served on editorial boards, and is co-editor of the Head and Neck Surgery-Otolaryngology textbook.

More like this
Alleged Cult Leader Larry Ray Is Awaiting Sentencing Following His Conviction
By Brad Witter
Glenda Cleveland Died 2 Decades After Trying To Turn In Neighbor Jeffery Dahmer
By Brad Witter
The Miraculous Real-Life Thai Cave Rescue Mission Still Resulted In 2 Deaths
By Brad Witter
Where Is The Bling Ring’s Rachel Lee Now?
By Arya Roshanian
Get Even More From Bustle — Sign Up For The Newsletter