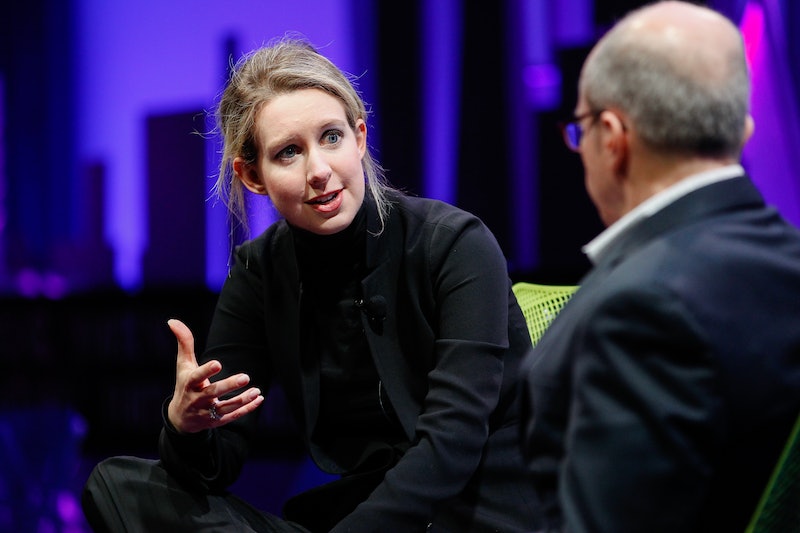 Elizabeth Holmes, the founder of the now-defunct tech startup Theranos, has been an object of popular fascination for years. After journalist John Carreyrou unearthed what the SEC described as “massive fraud” at the blood testing company, Holmes — once an admired symbol of women in STEM — became known as an infamous con artist. The public speculated about whether she’d faked her unnervingly low voice, goggled at her brazen lies, and eagerly read about the behind-the-scenes chaos at Theranos in Carreyrou’s bombshell book Bad Blood: Secrets and Lies in a Silicon Valley Startup. Since the publication of Bad Blood, Theranos has inspired an HBO documentary, a sequel podcast by Carreyrou, and a competing podcast by ABC News. This month, The Dropout, a fictionalized version of the ABC podcast, premieres on Hulu. The limited series stars Amanda Seyfried as Holmes, alongside Naveen Andrews, William H. Macy, Laurie Metcalf, and others in supporting roles.

Since the collapse of Theranos, Holmes has been busy getting married, having a baby, and going on trial for fraud. Read more below to learn about her background, her role at Theranos, and where she is now.

Who is Elizabeth Holmes?

Holmes was born in Washington, D.C., in 1984. Her father, Christian, had a long career working for the U.S. government, primarily for the U.S. Agency for International Development and for the State Department, and came from a distinguished family: His grandfather was a renowned doctor in Cincinnati, Ohio. Holmes credited her great-grandfather for inspiring her interest in medicine. Her mother, Noel, also worked for the government, as a foreign policy aide, until Christian Holmes’ career shift to the private sector — working at energy company Tenneco and then at Enron — moved the family to Texas. As a child, Holmes was already interested in science and invention, and was a model student at school. Holmes’ high school physics teacher told The Dropout podcast that, as a teenager, Holmes carried herself “with this kind of ‘can-do attitude, chin-up.’ So she was always very composed. And, you know, even when she had questions, even when things were confusing, she just still had this kind of presence about her that stuck out in my mind.”

In high school, she studied Mandarin by arguing her way into Stanford’s summer classes, usually reserved for college students. The university accepted her as an undergraduate student in 2001. At Stanford, she sought out mentorship from professors including Dr. Phyllis Gardner, a professor of medicine, who recalled meeting Holmes when she was a freshman on The Dropout podcast. Holmes had come up with an idea for “a microfluidic patch to sample blood, to test for infectious organisms, and then deliver antibiotics through the same microfluidic channels,” Gardner explained. Unfortunately, her idea wasn’t physically possible. But Holmes wasn’t put off by Gardner’s rejection: “[She] just kind of blinked her eyes and nodded, and left.” Instead, she approached engineering professor Channing Robertson, who was more open (or susceptible) to her faulty vision. Robertson later left his tenured position at Stanford to work at Theranos, and compared Holmes to Mozart, Beethoven, Newton, Einstein, and da Vinci in a quote to Bloomberg Businessweek Magazine.

In 2003, when she was only 19, Holmes founded Theranos; a year later, in 2004, she dropped out of Stanford to dedicate herself to the company more fully. She’d taken advantage of her parents’ connections to acquire funding for the company from venture capitalists including Donald L. Lucas and Larry Ellison. A few years later, in 2008, Sunny Balwani — with whom Holmes was in a secret relationship — loaned the company $13 million, and shortly thereafter became its president and COO.

What happened at Theranos?

For a while, Theranos — and, by extension, Elizabeth Holmes — were on the top of the world. By 2014, Theranos had raised $700 million in venture capital and was valued at over $9 billion. The company had raised that money almost purely on the strength of Holmes’ charisma, because their signature technology, the Edison machine, didn’t work. The Edison was a small-ish cube — around the size of a large microwave — that could, in theory, run over 200 blood tests using only a pinprick of a patient’s blood. There were a couple problems with this, laid out in Bad Blood and The Inventor. First, the machinery inside of the Edison never worked properly: pieces broke, parts got jammed, and so on; when important visitors came to the Theranos site and received a blood test designed to show off the product, they were whisked away from the machine and scientists hurried in to test the blood using a traditional apparatus. Second, it’s just not physically possible to run a barrage of blood tests on a tiny drop of blood. When Theranos installed their technology into Walgreens stores in Arizona, they had to train technicians to draw blood the old-fashioned way — using a needle — and they tested it at their site using old-fashioned machines, too. But Theranos’ rushed, secret blood tests were flawed even when they were being run on reliable machines.

For a while, none of that mattered. Holmes was such a compelling leader that the board of directors she’d put together, which included figures like Henry Kissinger and James Mattis, were dazzled by her. Mattis, who joined the board shortly after stepping down from the military, told Fortune, “The strength of the leader’s vision in the military is seen as the critical element in that unit’s performance … I wanted to be around something again that had that sort of leadership.” Former defense secretary William J. Perry, meanwhile, compared her positively to Steve Jobs, whom he knew personally: “He was a genius; she’s one with a big heart.”

Eventually, though, Holmes’ personal charisma wasn’t enough to save Theranos. Employees grew increasingly concerned about patients receiving faulty test results — concerns that led employees Tyler Shultz and Erika Cheung to speak to Carreyrou about what was going on behind the scenes at the company. Soon enough, in October of 2015, Carreyrou revealed to the world that Holmes’ miraculous technology was nothing more than a mirage.

Where is Holmes now?

In 2018, the SEC charged Holmes with “massive fraud,” and Holmes agreed to settle to avoid to going to court. She paid a $500,000 fine, returned her Theranos stock, and resigned from the company. She was also barred from serving as a director of a public company for ten years. That settlement didn’t preclude her from being prosecuted for criminal charges, though, and in 2018, she was charged with two counts of conspiracy to commit wire fraud and nine counts of wire fraud.

What happened at Holmes’ trial?

Holmes’ trial was repeatedly delayed due to the COVID-19 pandemic — which gave her plenty of time to get married and have a baby. She got engaged to hotel heir Billy Evans, an MIT grad who had worked at various start-ups, in 2019. Anonymous sources speaking to the New York Post at the time expressed skepticism about the match: “It’s like he’s been brainwashed. … He’s had a lot people very close to him sit him down and have a talk,” a colleague said. But the marriage went forward in the summer of 2019, and their first child, William Holmes Evans, was born in August of 2021.

Holmes’ fraud trial finally began, after repeated postponements, on Sept. 8, 2021. She was ultimately tried on eight counts of fraud. During her testimony, she was forced to admit that Theranos had only successfully completed 12 tests using its own technology, and that she had personally faked reports. She also testified that Sunny Balwani, her former partner and the former president and COO of Theranos, had physically and emotionally abused her and manipulated her in her professional life, with her attorneys arguing that he had controlled her so completely that he had “eras[ed] her capacity to make decisions.” Though it’s impossible to know what happened between Holmes and Balwani behind closed doors, these efforts to depict Balwani as the real mastermind behind Theranos did not sync up with the public image Holmes had built for herself over the years. As civil trial lawyer David M. Ring explained to the New York Times, “Elizabeth Holmes, up until today, has presented herself as the epitome of confidence — this spectacular, composed entrepreneur — and now all of a sudden she’s telling us, ‘I was the puppet and Sunny Balwani was the puppeteer.’” Carreyrou was also skeptical, describing their relationship to The New Yorker as “a partnership of equals.”

Holmes was found guilty of four counts of fraud related to Theranos’ investors, and not guilty of four charges related to the company’s patients. As juror Wayne Katz explained, the jury wound up acquitting Holmes on charges related to patients because she was “one step removed” from the patients, as opposed to the investors, whom she knew personally. “It's tough to convict somebody, especially somebody so likable,” he told ABC News, although he voted guilty on seven of eight charges.

Holmes now awaits sentencing and, until then, is free on bond.