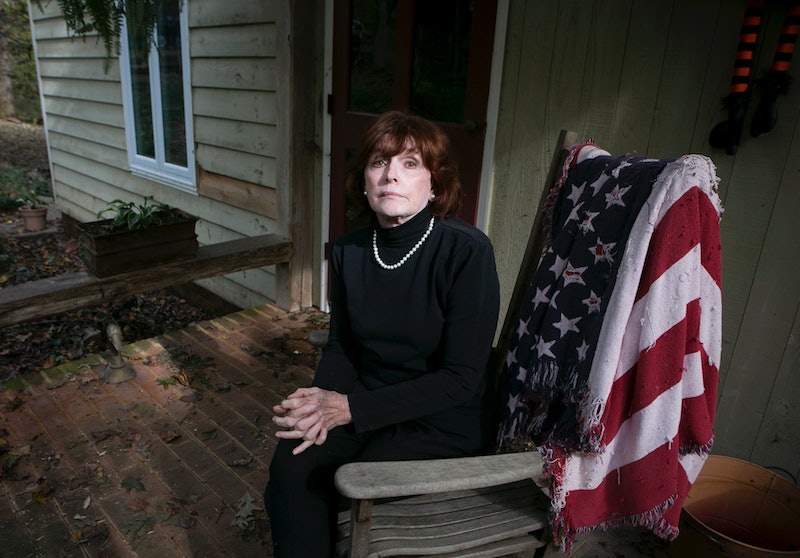 Impeachment: American Crime Story revisits Bill Clinton’s relationship with White House intern Monica Lewinsky and his eventual impeachment in 1998. In doing so, it explores some of the many figures involved in the scandals surrounding his presidency — including Kathleen Willey, played by Elizabeth Reaser on the show.

While Willey was working as a volunteer at the White House in 1993, she had a private meeting with the president in the Oval Office to discuss a permanent paid position she was seeking. At the end of the meeting, Willey alleges that Clinton ran his hands through her hair and fondled her against her will. Clinton acknowledged that he met privately with Willey but denied making any sexual advance, and the U.S. Office of the Independent Counsel ultimately concluded that there was not sufficient evidence to prosecute him.

Willey’s claims received less national attention than those of Paula Jones, whose allegations that then-Arkansas Governor Clinton propositioned her and exposed himself to her in 1991 laid the groundwork for his impeachment. However, Willey did testify as a cooperating witness in the sexual harassment lawsuit Jones filed against Clinton. (Jones’ case was ultimately settled out of court).

For several years, Willey tried to stay out of the limelight. She bought a house in Powhatan, Virginia, got married and then divorced, and worked at a bakery, Saks Fifth Avenue, and as a real estate agent. However, she accrued significant debt and has filed for bankruptcy five times in order to stave off foreclosure.

In 2007, Willey reentered the public eye with the publication of her autobiography, Target: Caught in the Crosshairs of Bill and Hillary Clinton. In it, she suggests that her husband Edward’s 1993 suicide may have actually been murder and alleges the Clintons were somehow involved in addition to claiming they had something to do with the death of her cat. Leading up to the 2016 presidential election, Willey also ran an anti-Clinton website called A Scandal A Day and served as a national spokesperson for the PAC Women Against Hillary.

Though Willey told Style Weekly in 2008 that she does not identify as a Republican, she has supported right-wing candidates and circulated right-wing conspiracy theories. She was a vocal supporter of Donald Trump during his campaign and presidency, seemingly choosing to overlook the numerous sexual assault allegations that surfaced about him during his presidential run. In October 2016, Willey appeared in a news conference hosted by Trump with several other women who alleged they were wronged by Bill or Hillary Clinton.

Willey was most recently in the news in 2018, when she launched a GoFundMe to help prevent the foreclosure of her home in Powhatan. She has a Twitter account where she occasionally tweets about the Clintons as well as conservative pundits like Tucker Carlson. She’s now in her 70s.

More like this
Eurovision Has Been Given A Whole New Look Ahead Of Its Liverpool Debut
By Bustle UK
Man Meets Politics: ‘Boy Meets World’ Star Ben Savage Is Running For Congress
By Jake Viswanath
You Might Want To Rewatch This Key 'On My Block' Scene To Understand 'Freeridge'
By Grace Wehniainen
The 'Freeridge' Cast Shared Their Hopes For A Potential Season 2
By Grace Wehniainen
Get Even More From Bustle — Sign Up For The Newsletter
From hair trends to relationship advice, our daily newsletter has everything you need to sound like a person who’s on TikTok, even if you aren’t.

This article was originally published on Oct. 10, 2016