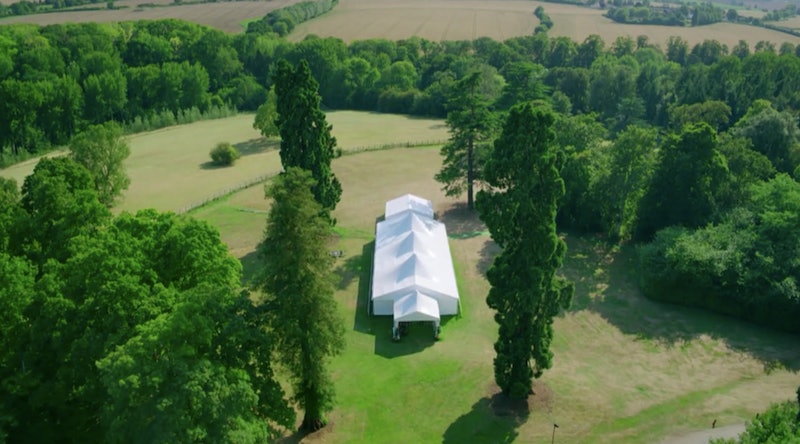 Now entering its 11th season, Channel 4's The Great British Bake Off continues to capture the imagination (and appetites) of the onlooking British public. The baking competition has endured many changes over the years, but the picturesque surroundings of the famous Bake Off tent remained the same throughout. That was, until this year. So where has The Great British Bake Off been filmed for season 11?

The amateur baking competition was, for its first ten seasons, filmed in the grounds of Welford Park in the town of Newbury, Berkshire. This time round, however, the production was based out of the Down Hall Hotel in Bishop's Stortford, on the Hertfordshire and Essex border.

Down Hall is a beautiful country house hotel on 110 acres of plush grounds and was an ideal spot for what was a very difficult filming process owing to the coronavirus crisis. As TV magazine Broadcast reports, filming had to take place at a hotel where the 120+ cast and crew members could live together during production, creating a self-contained “biosphere” for six weeks. Before entering Down Hall, everyone was required to self-isolate for nine days and take three COVID tests.

Speaking to Broadcast, Kieran Smith, an executive at Love Productions (the guys who make Bake Off) explained: “It was a massive operation, we even built 12 practice kitchens for the bakers to use on their days off.” (Love adopted a ‘two days on, two days off’ strategy when filming.) They also had mental health experts on board to help the cast and crew cope with the intense filming period and the unusual circumstances.

Along with the change in location this year, GBBO has also had a change of host, with comedian Matt Lucas stepping in when Sandi Toksvig decided to leave at the end of last season. And, as Smith explained to Broadcast, the hotel setting actually helped Lucas settle into the GBBO family. “He was practically living with the bakers,” she said. “It felt like he had always been there.”

More like this
Barney Walsh Has Been Linked With This Famous Miss World Winner
By Sophie McEvoy
Molly-Mae & Tommy Fury Revealed Their Baby Girl's "Really Unusual" Name
By Sophie McEvoy and Sam Ramsden
Joey Essex Is Rumoured To Be Dating A 'Love Island' Favourite
By Sam Ramsden
'The Traitors' Is Officially Being Turned Into A Board Game
By El Hunt
Get The Very Best Of Bustle/UK
Sign up for Bustle UK's twice-weekly newsletter, featuring the latest must-watch TV, moving personal stories, and expert advice on the hottest viral buys.

This article was originally published on Aug. 9, 2019