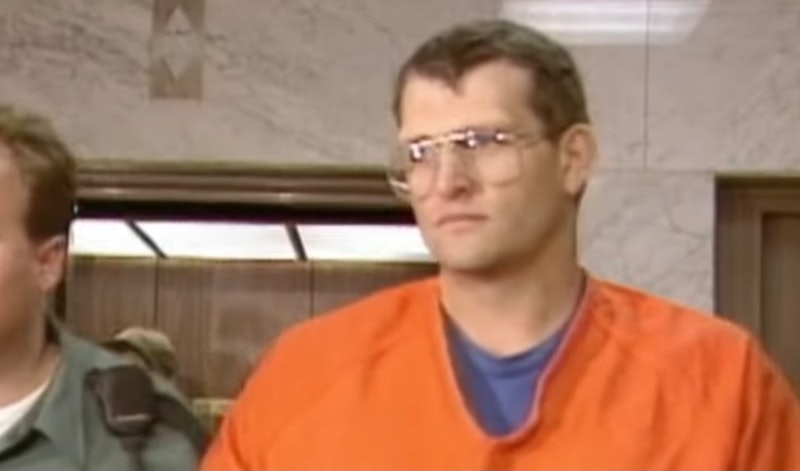 Between 1990 and 1995, long haul truck driver Keith Hunter Jesperson, aka the Happy Face Killer, murdered eight women across the United States. Though some of his victims have never been identified, most were women who were either hitchhikers or prostitutes, all of whom he strangled. After confessing to his first murder in a note left on a truck stop wall, Jesperson earned his nickname by sending taunting letters to media and law enforcement officials all signed with a smiley face. Netflix revisits his crimes in Catching Killers, a new docuseries told through the perspectives of investigators who caught serial killers.

Jesperson is currently serving multiple life sentences in Oregon State Penitentiary. According to ABC News, he was barred from giving face-to-face interviews because of how much he enjoyed the attention. He did, however, speak to ABC News’ JuJu Chang numerous times by phone in 2010. During the calls, Jesperson detailed several of his murders, beginning with 23-year-old Taunja Bennett in January 1990 — the same year he finalized his divorce from his ex-wife Rose Hucke.

Jesperson met Bennett in a Portland-area bar before taking her back to his home “to get lucky.” During a physical altercation, Jesperson repeatedly struck Bennett in the face, then strangled her out of fear of going to prison for the lesser crime of causing bodily injury. “I meant to kill her to cover up the assault,” he told Chang, who noted that he seemed to show no remorse. “It is matter of fact ‘cause that’s what it is.”

In a bizarre twist, a woman named Laverne Pavlinac tried to frame her abusive boyfriend John Sosnovske by falsely confessing that they’d killed Bennett. Using details from newspaper reports, Pavlinac even planted a purse she claimed to be the victim’s in her boyfriend’s car. The pair were ultimately convicted and sent to prison for the murder. Afterward, Jesperson became frustrated and envious of the attention they’d received for his crime — something that motivated him to start a killing spree throughout California, Florida, Nebraska, Oregon, Washington, and Wyoming.

Jesperson’s later victims included Cynthia Rose Wilcox, Laurie Pentland, Angela Subrize, and eventually his girlfriend, Julie Ann Winningham, whose murder led to his arrest in 1995. Though he initially denied guilt, Jesperson admitted to his crimes in a letter to his brother, who turned the confession over to police. In order to avoid the death penalty, Jesperson cut a plea deal to serve multiple concurrent life sentences.

In November 2007, Jesperson reflected on his murders while speaking to Duquesne University forensic science and law students via conference call. “When I did it, it was done, over with,” he told the students, per the Pittsburgh Post-Gazette. “I did not cherish murder. I basically looked at it as something I had to do to get it over with and keep going. I didn’t intend on holding [the killings] hostage in my mind or in my grip for any more of a length of time than I had to.”

He went on to describe his life in prison, where his nickname was well-known among his fellow inmates. “You can imagine, I walk the track out here with other convicts and they're saying, ‘If you're happy and you know it, clap your hands!’” he said. “How would I pick a better name than that?”

Jesperson has three children. His eldest, Melissa Moore, published a memoir in 2009 and released a podcast about growing up as the Happy Face Killer’s daughter. She’s also made several TV appearances over the years, including on ABC’s 20/20, Dr. Phil, and LMN’s Monster in My Family, where she met with the sister of her father’s first victim. “I’m not apologizing on behalf of my dad,” Moore explained in a July 2015 Marie Claire profile. “I’m apologizing as a caring human being to another caring human being.”

Moore once took her children to meet their grandfather in prison, but made the decision to distance herself from Jesperson after the visit. On 20/20, she called it the one moment as a mother she wishes “she could take back,” but added that her children have no memory of the experience. “Being the daughter of a serial killer puts everything into question, ‘Am I worthy? Do I have a right to exist?’ When he took so much away from other people,” Moore told 20/20. “If I’m happy, is that a slap in the face to the victim’s families? I don’t want it to be.”

Jesperson is now 66 years old and will spend his remaining days behind bars.