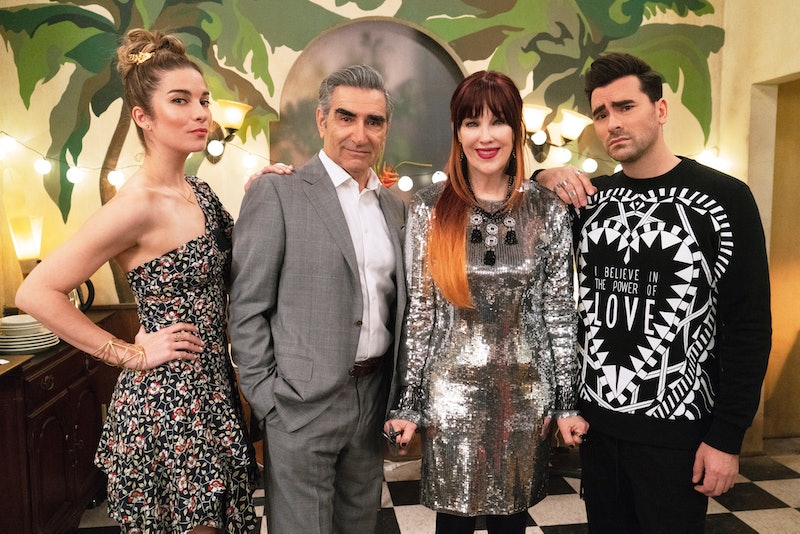 No, this is not a falsehood: Schitt’s Creek is leaving Netflix on Oct. 2, but before you start acting like a disgruntled pelican, there is some good news. Beginning Oct. 3, all six seasons of the beloved, Emmy-winning Pop TV comedy featuring the over-the-top antics of the Rose family — Johnny (Eugene Levy), Moira (Catherine O’Hara), David (Daniel Levy), and Alexis (Annie Murphy) — will be available for Hulu subscribers to stream in the United States.

“Based on the number of Schitt’s Creek GIFs we Slack every day, it’s no surprise that we are absolutely thrilled to welcome Johnny, Moira, Alexis, “Daviiid” and the wonderfully unique residents of Schitt’s Creek to Hulu,” said Hulu president Joe Earley in a statement on April 28. “We can’t wait to share the award-winning, blisteringly-funny, yet heartwarming series and characters with our subscribers. We know they’ll fit in nicely.”

More recently, Hulu dropped another announcement on Sept. 29 that was more than just a little bit Alexis. Playing off of the Rose daughter’s fictional Alexis Rose Communications PR company, they issued a press release purportedly from the socialite herself. “I don't want to brag, but Hulu is, like, totally obsessed with my family,” she “wrote,” commending the streamer for enlisting her services. “After weeks and weeks of, like, heavy business negotiations with Hulu, I could absolutely not say no as a businesswoman. The world deserves the best. And I love that journey for them.”

Then came her “special announcement” — accompanied by a “boop,” for good measure. “Alexis Rose Communications is happy to bring you the world exclusive announcement that Hulu will be the official destination for Schitt's Creek beginning October 3rd,” the CEO and founder wrote.

Why Did Schitt's Creek Leave Netflix?

Though Schitt’s Creek aired on Pop TV (and CBC in Canada) beginning in 2015, the comedy gained more widespread popularity when Netflix struck a streaming deal, making it available to their subscribers. By March 2020, it had become the platform’s second-most-watched show, though it is not a Netflix Original. When it came time to re-negotiate that deal, Hulu outbid Netflix, granting their streaming platform the exclusive U.S. streaming rights to Schitt’s Creek.

Co-creator Dan Levy isn’t leaving Netflix, though. In September 2021, the Emmy winner signed an exclusive deal with Netflix that began with movies and expanded to include TV series in July 2022. “Netflix offered Schitt’s Creek a second home at just the right time and opened the doors to a whole new audience for us,” Levy said in a statement. “Watching the show thrive there has only enhanced my excitement about continuing to tell specific, meaningful stories with them in both tv and feature film. A full circle moment.”

In the sage words of Moira Rose, “One must champion oneself and say, “I am ready for this!”