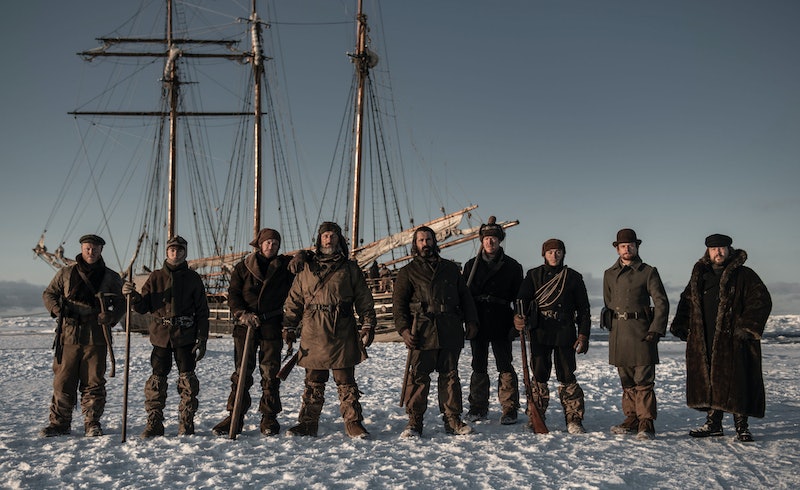 It may only be September, but BBC Two’s long-awaited The North Water, a TV adaption of Ian McGuire’s bestselling (and famously gory) book of the same name, will have viewers shivering. Set during the late 1800s and starring Jack O’ Connell and Colin Farrell, the five-part thriller sees disgraced ex-army surgeon Patrick Sumner (O’Connell) sign up as a ship’s doctor on a whaling expedition. The brutal nature of some particular crewmates would be menacing enough, but making the voyage even more dangerous is the destination, as the ship ventures into the freezing, treacherous waters of the Arctic. But did the cast and crew face the same chilling conditions as the characters, and where was The North Water filmed?

It appears The North Water production team went on a major expedition of their own, as the BBC confirms that filming primarily took place in the Arctic, “shooting on the frozen seas north of the Svalbard Archipelago.” The cast and crew were said to have travelled “as far as 81 degrees north” to film scenes – which is, according to the BBC, the furthest point north a drama series has ever filmed.

First images of the cast — which also include Line Of Duty’s Stephen Graham — and their epic adventure have been released, and from the looks of the gripping trailer, it was more than worth the trip, as the beautiful and vast Arctic landscapes lend themselves to the sinister survival plot.

Jack O’Connell, who stars as Patrick Sumner in the series, told The Guardian that the experience was “amazing – the constant awareness of the threat of polar bears, occasional visits from walruses popping up from under the ice. It made for something altogether unforgettable.”

Stephen Graham, who plays ship captain Brownlee, said in a statement to BBC: “Filming on the ship was an incredible experience and one that I will never forget. To be so privileged to see such beautiful animals like polar bears in their natural habitat - albeit it an ever changing one, sadly - was truly remarkable."

Colin Farrell, who plays harpooner Henry Drax, also said the experience was a visceral one. Per Radio Times, he described being on location in the archipelago as “life-changing... There was just this emptiness and this loneliness to the place that was very beautiful and very honest. It wasn’t the kind of loneliness that we can experience in the cities.. This was the loneliness of when you hear people talk about human insignificance in the face of nature and the brutality of nature, the beauty of nature, the vastness of the scope of it – it was very much that every single day.”

Much of the Arctic action takes place on three-mast schooner, Activ, which was built in Denmark in 1951 as a cargo ship and now acts as an expedition ship for artists, scientists and of course, film crews hoping to travel into the the ice packs of the northern waters.

The drama also filmed in several locations slightly closer to home, including sets in Budapest and Basingstoke. As well as the Arctic wastelands, McGuire’s book The North Water is set in Hull during the late 1800s, during the last days of the city’s once-thriving whaling industry.