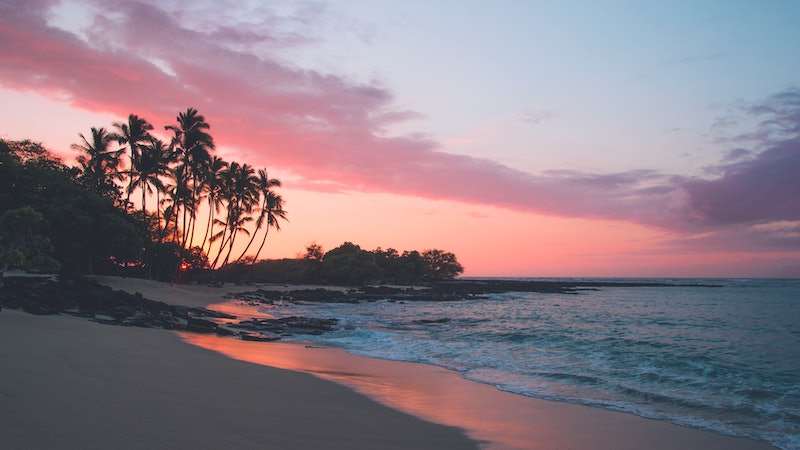 After taking viewers to Fiji for Season 1, Love Island U.S. moved to Las Vegas to film its second season due to coronavirus travel restrictions. The upcoming third season, premiering on July 7, will continue filming on American soil, but this time the 12 new singles will once again vie for love on an actual island — Hawaii, to be exact.

“It just brings this whole new beautiful, romantic, sexy energy to the show that it deserves,” host Arielle Vandenberg teased to Entertainment Tonight of the location in June. CBS hasn’t revealed the villa’s exact location, but Vandenberg said that Justin Bieber once vacationed on the same private property, which boasts two waterfalls and a water slide. She didn’t specify which of Bieber’s Hawaiian getaways she was referring to, though Architectural Digest reported in 2017 that he’s stayed at the Waterfalling Estate, a $10,000 per night, five-bedroom, seven-bathroom cliffside property that faces several waterfalls and includes a rooftop helipad, private golf course, tennis court, basketball stadium, and Olympic-sized swimming and diving pool.

Vandenberg also told Parade that filming in Hawaii brought a “cool, beautiful, healing, grounded energy” to the set — not to mention amazing sunsets. “You don’t even know you needed it until you get here,” she said. “I’ve been here for two weeks already and I wake up so happy. So I can’t even imagine being in the villa as these Islanders get to wake up here every day.”

She also suspects the picturesque scenery will inspire some contestants to say “I love you,” as she recently told her husband over a glass of wine on their balcony. “I’ve been saying that for years. But it felt like the first time I was telling him!” Vandenberg told Parade. Narrator Matthew Hoffman echoed the sentiment in the same interview. “If people don’t fall in love in Hawaii, where do you fall in love? Couples in Burbank don’t stand a chance,” he joked.

Hawaii Island Film Office commissioner Justin Finestone noted to the Hawaii Tribune Herald that shooting for Love Island Season 2 would primarily take place on a private property on the Hamakua Coast, but that Islanders could go on “dates” around the island as well. State Film Commissioner Donne Dawson also confirmed to Hawaii News Now that the Love Island production team had booked the entire Grand Naniloa Hotel in Hilo as their summer headquarters through the end of August.

According to Dawson, the last major production on the island was 2008’s Indiana Jones and the Kingdom of the Crystal Skull, and Love Island’s budget is “almost double” the nearly $20 million the film spent in the state. “It’s a big deal,” he added. “Hawaii Island has not seen this level of production.”

More like this
Twitter Can’t Get Enough Of The Romance In 'Ekin-Su & Davide: Homecomings'
By Sophie McEvoy
We’ve Got A Text! Another 'Love Island' Series Is On The Way
By Darshita Goyal
Fans Have Discovered The 'I'm A Celebrity' Camp's *Exact* Location
By Emma Madden
Yes, That Is Victoria & Another ‘BiP’ Alum In Zach’s ‘Bachelor’ Trailer
By Kadin Burnett and Grace Wehniainen
Get Even More From Bustle — Sign Up For The Newsletter