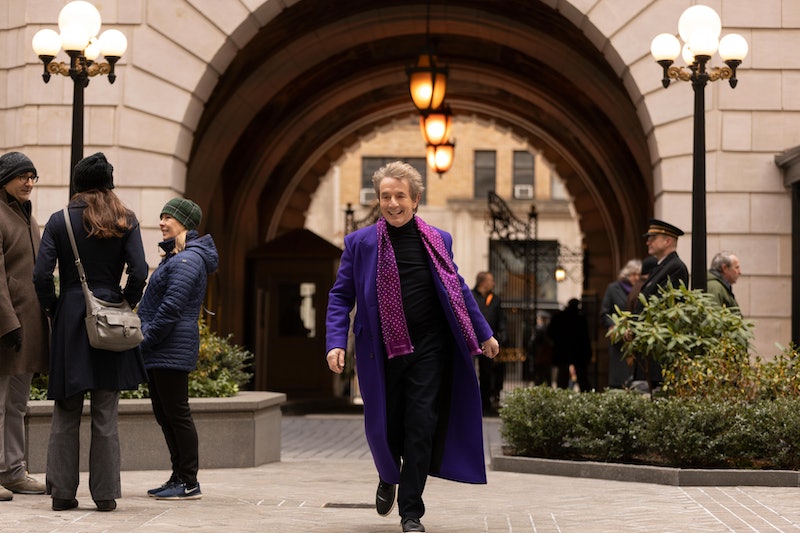 On the Hulu show Only Murders in the Building, the location is an important part of the show’s equation, and the building in question is the fancy Manhattan apartment complex called The Arconia. But in real life, the building goes by another name and has a unique history attached to it.

Called the Belnord in real life, the apartment building is situated on West 86th Street between Broadway and Amsterdam in the city’s Upper West Side neighborhood. Built in 1909 by the Astor family, it was helmed as the largest apartment building in the country as it covered an entire city block. As seen on the show, it boasts beautiful arched entryways and a spacious courtyard inside with a flowing fountain. It was deemed a historical landmark in 1966, and is one of the few buildings in NYC where a car can enter the courtyard — a relic of an older time. The production designer of Only Murders in the Building Curt Beech admitted to Architectural Digest that he drew inspiration from not only the Belnord, but also other nearby residences like The Ansonia, The Dakota (notably the site of John Lennon’s assassination), and Graham Court.

But the Belnord didn’t always look like that. After a few decades of opulence, which included large apartments and unheard-of amenities at the time (like washing machines and fridges with icemakers), it soon fell into disrepair. Under the ownership of landlord Lillian Seril, the courtyard became unkempt and when utilities broke, tenants were forbidden to replace them. Things got so bad at the Belnord that the longest rent strike in NYC history was organized in 1978, ending only in 1994 when Seril sold the building to developer Gary Barnett for $15 million.

In its heyday, the apartment complex saw a fair share of famous tenants: according to a New York Times report, they included, “Lee Strasberg, the dictatorial father of Method acting, who was often visited by his shy protégée Marilyn Monroe; Walter Matthau, when he was an up-and-coming theater actor with a young family; the actor Zero Mostel, who played Tevye in the original Broadway production of ‘Fiddler on the Roof’; and Isaac Bashevis Singer, the Nobel Prize-winning author, who liked to jog around the courtyard in a three-piece suit.”

While Only Murders in the Building uses the Belnord for exterior and elevator scenes, the apartments belonging to Steve Martin, Martin Short, and Selena Gomez on the show are actually built on sound stages. Similarly, many of the show’s interior scenes — like the lobby — are not from the Belnord, but rather another luxurious building on the Upper West Side. TimeOut New York reports that these other scenes are filmed in the turn-of-the-century 270 Riverside Drive. The show also expands its New York City filming to other areas of Manhattan, the Bronx, and the Rockaways on Long Island.

Today, MSNBC contributor, author, journalist, and former State Department official Richard Stengel lives in the Belnord, but unfortunately, it doesn’t seem like Sting is one of his neighbors.

Along with The Belnord, the show was also filmed in an iconic UES establishment: a 76-year-old diner. Situated on the corner of York Avenue and 86th street, The Mansion diner has been serving meals to Upper East Siders for decades but it’s only been part of Only Murders In The Building for an episode. And you might not even recognize it since it goes by a different name on the show, The Pickle Diner, where (spoiler alert!) Bunny Folger (Jayne Houdyshell) had a meal before she was killed. It’s not the first time the diner hosted a Hollywood project — Gossip Girl and some independent films have also been filmed there — and the episode will likely not be the last. With the show about to investigate Bunny’s murder in the upcoming Season 2 episodes, The Mansion will probably make more cameos.

Another institution that hosted the show’s kooky sleuths was the United Palace Theater in Washington Heights. The theater — or at least, its interiors — made a one-episode appearance as the venue Oliver chose to gather his suspects. It was built in 1930 and designed by architect Thomas W. Lamb.

Season 1 and the first 2 episodes of Season 2 of Only Murders in the Building are available to stream on Hulu.

This article was originally published on June 28, 2022