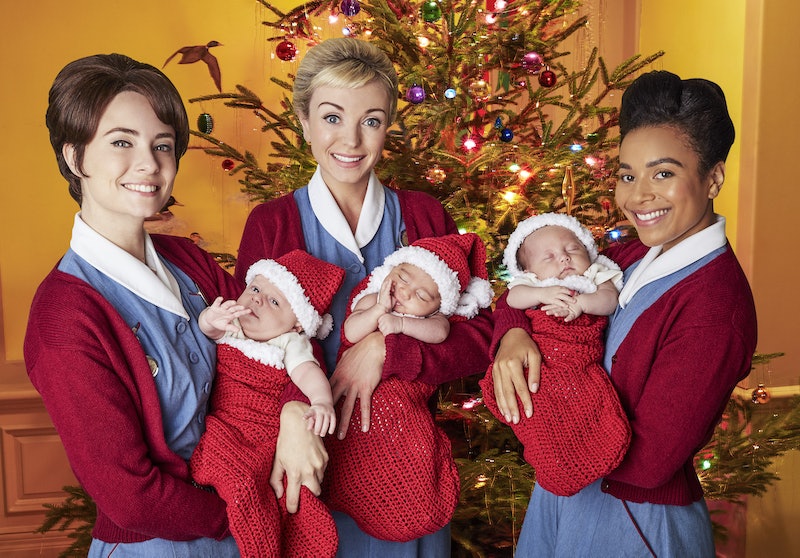 Slotting in nicely to the 2019 festive TV line-up is BBC One's Call the Midwife, which will return to our screens on Christmas Day to kickstart its ninth series. The yuletide special will see the midwives head to a remote Scottish island, where the locals are in dire need of medical assistance. But where was the Call the Midwife 2019 Christmas special filmed?

As the Metro reports, this year's festive episode was filmed in the Outer Hebrides off the coast of Scotland — taking a break from the period drama's usual filming spots, which as the Express reports, include London, Kent, and the Longcross Film Studios in Surrey. But what brings our favourite midwives to the Scottish beauty spot? Well, the 2019 Christmas special takes place on the picturesque island, and follows the main cast as they arrive to assist residents who are in desperate need of nurses and midwives. The show's creator, writer, and executive producer, Heidi Thomas, described filming in the Scottish Islands as a "magical Christmas experience," before teasing that the upcoming ninth season will see "Nonnatus House shaken to its foundations."

An official synopsis of the Christmas Day special teases that the midwives will be "exposed to the elements," as they're forced to work in "bleak conditions" before returning home in time for Christmas. According to the BBC, the new series will then continue on to show Nonnatus House enter a bold and innovative era, and display the team of medics and midwives as they face unexpected challenges — during which the population shifts, rules change, and old diseases make an unwelcome return.

Returning to the Call the Midwife cast for a ninth run is Miriam Margolyes as Mother Mildred, Jenny Agutter as Sister Julienne, Linda Bassett as Nurse Crane, and many more. The show's highly-anticipated return follows a very successful eighth outing, which managed to draw in an average of nine million viewers per episode, per the BBC — and if you can't get enough Midwife drama, there's plenty more where that came from, because a tenth and eleventh season have already been commissioned by the BBC, meaning the show will be sitting pretty on the channel until at least 2022.

As the Radio Times reports, the Call the Midwife Christmas Day special will air on Wednesday, December 25, at 7.30 p.m. on BBC One — and you can expect the remainder of season nine to begin airing in early 2020.