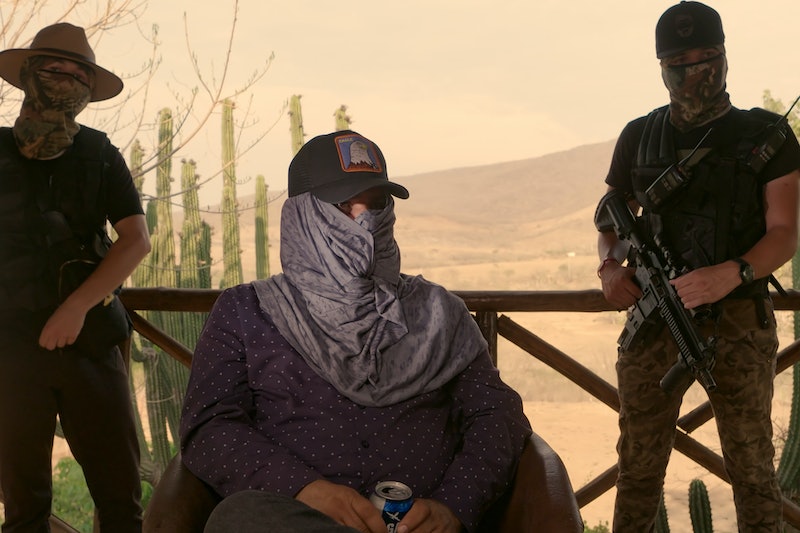 Unlike his longtime partner Joaquin "El Chapo" Guzman, World's Most Wanted subject Ismael "El Mayo" Zambada García has never been captured. The notorious Mexican drug lord, who's credited with building the Sinaloa Cartel with El Chapo in the early '90s, has managed to evade authorities for years. Where El Mayo is now remains unknown, but he's believed to be hiding out in Mexico's Sinaloa mountain.

"I have been up into those mountains and it's very difficult to capture anybody," former DEA head of international operations Mike Vigil told Bloomberg in 2018. "Mayo Zambada is one of the most astute drug traffickers that Mexico has ever spawned."

The United States Department of State is currently offering a reward of up to $5 million for his arrest and/or conviction, though authorities have come close to finding him. In a rare 2010 Proceso interview, El Mayo claimed the Mexican army had closed in on him several times. Thanks to his knowledge of the countryside, he was able to escape each time. But had they been more successful, El Mayo, who said he lives "in panic" of being imprisoned, likely wouldn't hand himself over alive. "I don’t know if I would have the guts to kill myself" if captured, he told the outlet, per the Los Angeles Times. "I want to think that yes, I would kill myself." Asked if he thinks he will ever be caught, El Mayo responded: "At any moment, or never."

Not all associates of the Sinaloa Cartel kingpin, who the FBI indicted in 2003 for drug trafficking, have been so lucky. In addition to El Chapo, who's now serving a life sentence in a Colorado federal prison, El Mayo's son Vicente Zambada Niebla is serving a 15-year sentence after pleading guilty to multiple drug-trafficking charges and admitted to ordering murders and kidnappings of cartel figures who wronged his father or his allies, per Vice. (Zambada Niebla cooperated with U.S. authorities and later testified against El Chapo in 2019.)