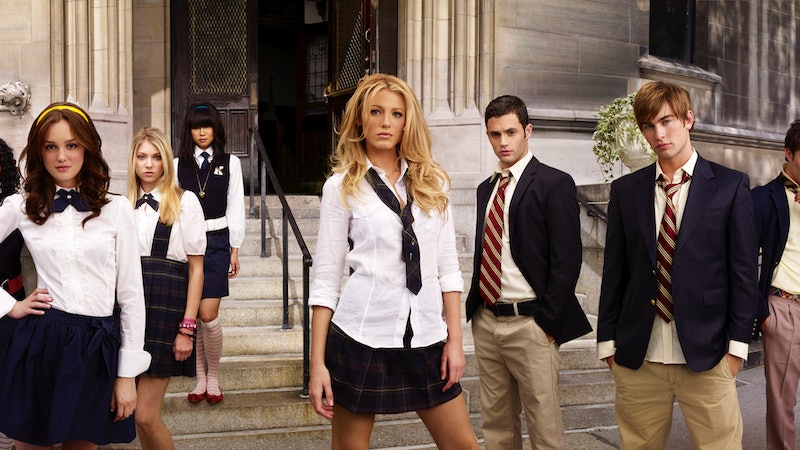 If you’ve watched all six seasons of Gossip Girl, or even just the first few, it’s almost guaranteed that you once felt like you were an actual student at the Constance Billard School for Girls, or St. Jude’s School for Boys (we don’t judge). You likely know Blair, Serena, Nate, Chuck, and Dan (especially Dan) better than your own family. But that’s exactly why you can also identify with so many of the characters. Finding out which Gossip Girl character you are is a tougher task than most may expect, but finding out the answer using your Myers-Briggs personality type might make the question a bit easier to answer.

The Myers-Briggs Type Indicator is possibly the most extensive personality test you will ever take, examining four core qualities about yourself and using those characteristics to determine which personality you are out of 16 possibilities. If you don’t know your own personality type yet, there are many sites where you can take the test for free. Once you figure yours out, you can see which Gossip Girl character is most like you.

Are you the likable it-girl like Serena, a villain with a hidden heart like Chuck, or a creative with an imagination that’s almost too wide like Dan? Whoever you get, don’t be too disappointed if you don’t match with your favorite character — we're all Georgina at one point or another.

ESFPs are described as “The Entertainer,” and while Serena van der Woodsen may not be an entertainer in the J-Lo sense, the title applies to her in different ways. Serena is her happiest when she’s having fun with friends and family (and her current beau), and she wants those around her to feel just as joyous, even if it means doing whatever it takes to help them get through their own issues. However, ESFPs are not great at confronting their own drama, and much like Serena, it just seems to follow them no matter where they go in life.

Everyone has a Dan Humphrey in their life: someone who is quiet yet strong-willed, idealistic yet stubborn about morals, quiet but capable of forming genuine relationships with others. And if you are an INFJ, you are the Dan in others’ lives. INFJs are naturally logical, which is what they often show to people at first, but they tend to make decisions based on passion and fairness rather than adhere to any system. Dan wants the life of an intellectual, the reputation of a great writer, and an upper-class girl without any of the class politics, which makes him the perfect contradiction.

ENTJs are known for being extroverted, natural-born leaders. Google “leader” and you might just find Blair Waldorf’s face. From birth, she started scaling the ranks by commanding her rich parents, then her housekeeper Dorota, and finally, her fellow students, snatching the Queen Bee title without anyone else’s permission. Blair’s determination and drive are unmatched, and her appetite for a good challenge is insatiable, which are defining ENTJ qualities. We wouldn’t be surprised if Blair ended up beating her former beau Nate in the race for mayor of New York.

ISFJs are an interesting breed as some of their qualities tend to contradict the nature of their personality type, which applies to Nate Archibald when you dig deep. He has social skills that are almost too good but tends to retreat under pressure. Although he’s able to sympathize well, he does have great analytical abilities when needed. He is faithful to his family and their traditions, but also open to new ideas and paths in life. But most of all, like true ISFJs, Nate manages to make genuine connections on a deeper level with almost everyone he meets.

Is there anyone that gets more riled up about a debate than Chuck Bass? A love of arguments and tearing their verbal opponents to shreds with sheer logic is a defining characteristic of ENTPs, and Chuck does it with a dash of wit against anyone who dares to challenge him (nearly everyone). His penchant for winning often cuts deep and makes him burns bridges with his loved ones, but in true ENTP fashion, Chuck always finds a way to repair their trust, especially when it came to Blair, the only person that could ever match his devious ways. ENTPs are too smart and mischievous for their own good, but sometimes, their intentions are surprisingly good.

ENFPs are known as “The Campaigner,” and Jenny will always campaign for what she believes is right — even if it’s really not the right thing at the time. ENFPs are very independent people who are driven by creativity and aim to disrupt the status quo while doing good in the world. Much like Jenny, they are also very compassionate and open with their feelings, making them popular among even those threatened by their potential. Luckily, ENFPs’ imaginations usually lead them to the right place, so Jenny was always going to have the last laugh.

Blair may have been Queen Bee of Constance Dillard, but there are few adults more known and respected on the Upper East Side than Lily van der Woodsen, and that popularity is the defining quality of ESFJs. They’re the ideal party hosts, making time to have genuine conversations with everyone in the room, and thrive in any situation where they can take responsibility and support their loved ones. Lily does this all with style, grace, and the occasional salacious backstory.

Like father, like son. It’s no coincidence that Rufus and Dan’s personality types are so similar, but where they differ is how they carry out their traits to the world. ENFJs are more naturally sociable and able to promote their cause through sheer determination and persuasive leadership. Like Rufus, ENFJs are unable to stop themselves from standing up for the ones they love, even if it’s not the right thing for either party. And while they can be stubborn, they’re also some of the more accommodating and understanding people out there. There’s a reason why Lily just couldn’t stay away.

Vanessa is the type of girl we all aspire to be (at least until she turns into a mean girl and leaves the show) — level-headed, reliable, loyal, creative, and skilled at multiple things. These are the top qualities of ISTPs, who are typically quiet and realistic, yet their curiosity can lead them into bold new directions. This is exactly what happens to Vanessa as she charges into a new upper-class world and learns new trades as she goes, but her loyalty to her true loved ones never wavers.

It can be argued that Eric is the unsung hero of Gossip Girl. Serena’s little brother is always encouraging, understanding, and sensitive to others, which is probably how he’s able to bond with Chuck of all people. But like most ISFPs, underneath that quiet exterior, he is very creative and spontaneous, with a penchant for change (he’s somehow out of town all the time). ISFPs are adaptable to most environments and never one to judge you, making them the ideal friend to turn to. And we can’t think of a single character that doesn't add least have some soft spot for Eric.

Oh, Georgina. We’re very sorry if you happen to match with the queen of evil, but don’t feel too terrible. In fact, most ESTJs use their qualities for the greater good. ESTJs are highly adept at leadership and often make great politicians for their ability to persuade and motivate people. They have outstanding work ethic and judgment, but if it’s not reciprocated by the people around them, they will get angry. Georgina just decides to use her charms on people for devious plots and dangerous indulgences, not for inspirational tasks. Don’t be like Georgina.

Bart Bass was a man of his word, and he expected no less from anyone else. ISTJs are very fact-oriented, never jumping to conclusions and always analyzing a situation, sometimes even to their detriment, as Bart did multiple times. People with this personality type are stable and dependable, and always want to hold up long-held traditions. But with that responsibility comes a cold exterior that’s hard to crack and expectations for others that are difficult to reach. As the new Broadway show says, be more chill and you’ll be fine.

Blair’s housekeeper always brought a calm and nurturing presence to the show, a trait that INFPs carry with them. INFPs are mediators by nature who work tirelessly to bring peace and harmony to the people they care most for, something that Dorota has always done for Blair. She’s fiercely loyal, unintentionally hilarious, and would always partake in whatever scheme Blair asked her to, no matter how immature. INFPs have compassionate and idealistic personalities, which Dorota always used for better or worse — in the case of Blair, mainly for worse.

Eleanor is a mysterious creature. You never know where her heart lies, but it’s never in a bad place. INTJs are quietly ambitious, always making moves and attempting to come up with new concepts on the fly. And while she’s not nearly as devious as her daughter Blair, she’s independent and determined in her own right, always aiming to outdo her peers and reinvent her craft while always keeping a smile on her face. Well, at least trying to.

We wish we were as smart as Nelly Yuki. INTPs are brilliantly inventive, intellectual, and creative, and they are capable of making things you never knew you needed or crafting theories that would make you question your entire life. Nelly obviously has that kind of capability, especially prior to getting absorbed into Blair’s mean girl crew. But much like many INTPs, her emotional disconnect and fear of failure both make her a perfect fit for the clique and threaten her intellectual potential. Don’t let that happen to you.

So, who are you? This is one secret you should tell, no matter what Gossip Girl might say.